Dennis view more articles
Facebook 0 Twitter 0 Pinterest 0 Google 0 LinkedIn 0
There are some conspiracy theories have have endured for one reason or another, and one of the most enduring is the Contrail/Chemtrail Theory. This theory basically states that the government is dispersing some chemical agent into the atmosphere through the use of aircraft.

Just about any aircraft is susceptible to the theory; however, commercial aircraft usually receive the most blame. The alleged chemical agent is left behind in the aircraft’s contrail causing conspiracy theorists to dub these vapor clouds “Chemtrails”. However, this theory would easily just fade away if the theorists would learn a little more about air traffic patterns and atmospheric science.

Last year, we reported on how NASA was taking a look at contrails (not chemtrails) and their effect on weather. Contrails are real and are commonly dispersed by aircraft. They are a result of condensation of water and ice along with some soot and carbon monoxide. NASA describes it as:

Because contrails are primarily water, they do seem to simulate natural occurring clouds. So much so that NASA’s own satellites cannot tell the difference between clouds and contrails.

Nevertheless, Conspiracy Theorists maintain that contrails and chemtrails are real. Chemtrails being made up of some secret chemical substance for unknown reasons. The speculation among conspiracy theorists includes population control, genocide, mass inoculation, and weather modification.

Aside from their chemical make-up, Conspiracy Theorists contend that there is a distinct difference in the physical appearance of contrails and chemtrails. According to the theories, contrails dissipate after a short time, while chemtrails persist for a much longer time duration and are much longer in length and thicker. This YouTube video is a prime example of what theorists claim differentiate contrails from chemtrails.

However, it seems that most of this “physical evidence” can be explained away with research into air traffic patterns and atmospheric science.

For example, it is widely known that contrails can persist for hours on end depending on atmospheric conditions.

Basically, the more humid and colder the atmosphere, the longer the contrail can be seen. This is not conjecture. MetaBunk.org writer, Mick West, did the research and found a number of books (ranging the last 60 years) stating this fact. This knocks a pretty large hole in the chemtrail theory, especially, since science has been stating this nearly 30 years before the theory starting gaining any sort of traction.

Theorists also point to the grid patterns left behind by so-called chemtrails. However, that is largely explained away by the increased number of airline flights and, more importantly, the number of flight routes.

This not only means more flights, but more direct flights causing an increasing number of contrails. This animation of all the flight traffic in North America created by the University of Nebraska Omaha puts that fact in perspective.

There is another hole kicked in the chemtrail theory.

NationsOnline.org has a fantastic map that depicts the locations of major airports, which are locatred in major cities. 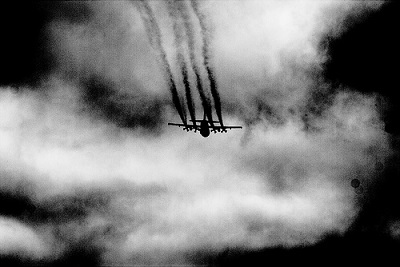 Are contrails totally benign? Not really. They do contain some greenhouse gases and their cloud-like physical appearance is being studied to see how it is effecting the atmosphere, if at all.

However, are thick, long-lasting contrails in a grid-like pattern proof of chemtrails? No…Not all.

In the last 30 years, nearly as long as the conspiracy theory has been gaining traction, the airline industry has been increasing the number of routes and the number of flights worldwide. This fact coupled with atmospheric effect put a fairly large hole in the Contrail/Chemtrail Conspiracy Theory.