Mark view more articles
Facebook 0 Twitter 0 Pinterest 0 Google 0 LinkedIn 0
By now, we all know what has been going on in the Ukraine, and in Crimea. Vladimir Putin’s chest pounding and nostalgia for the Soviet Union has led him to commit the unbelievable blunder of sending troops into an independent, sovereign nation. It was nothing short of an illegal invasion and act of war.

In the past, Ukraine has been held hostage over its independence on Russian gas. All Putin has had to do in the past to bring the Ukraine into line is to threaten to turn the gas off; and the West was hardly in a position to help, as they heavily relied on the same gas. Putin, therefore, acted from a position of impunity and huge power. He could get away with murder, because the West needed something he had. Welcome to politics 101.

And, what did the West do to put Putin in his place now? They sent John Kerry, who in a supreme act of hypocrisy lectured the media that Putin can’t go around invading countries under a false pretext. I’m sure I heard roars of laughter coming from the direction of the Kremlin.

And what makes this even more hypocritical is that way back in 2006, the US Kiev Deputy Chief of Mission warned that Crimea – part of the Ukraine – was under Russian threat. How do we know? Because the relevant diplomatic cable is on Wikileaks.

“Pro-Russian forces in Crimea, acting with funding and direction from Moscow, have systematically attempted to increase communal tensions in Crimea in the two years since the Orange Revolution. They have done so by cynically fanning ethnic Russian chauvinism towards Crimean Tatars and ethnic Ukrainians, through manipulation of issues like the status of the Russian language, NATO, and an alleged Tatar threat to “Slavs”, in a deliberate effort to destabilize Crimea, weaken Ukraine, and prevent Ukraine’s movement west into institutions like NATO and the EU. While the total number of pro-Russian activists in Crimea is relatively low, the focus is on shaping public perceptions and controlling the information space, so far with success.” 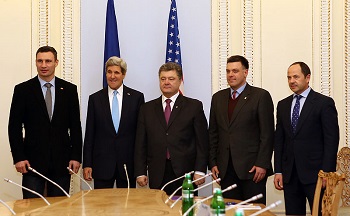 Fast forward to 2009 and we now have Volodymyr Horbulin, Ukraine’s former National Security Adviser, who said that politics inside Russia was pushing the country towards a showdown with Ukraine. These comments were made after then Russian President Dmitry Medvedev, Putin’s hand-puppet and parrot wrote a ticked off letter (probably written by Putin) in which he said he would delay sending the Russian Ambassador to the Ukraine until things changed the way Moscow wanted them to change.

And change it eventually did. In 2010, the pro-West Ukrainian President Viktor Yushchenko was ousted from power after national elections. His pro-Moscow opponent Viktor Yanukovych became the new President with 48% of the vote. Hardly a ringing endorsement.

And in a classic example of history repeating itself, it was the ousting of Yanukovych, who was living the high life, which led to Putin using the incident as a pretext for invading. With gold fittings in his presidential palace, a private zoo, and bizarrely an ancient sailing ship that would make Horatio Nelson green with envy, Yanukovych made Gaddaffi and Saddam Hussein look like amateurs.

Just another day in Russian politics.