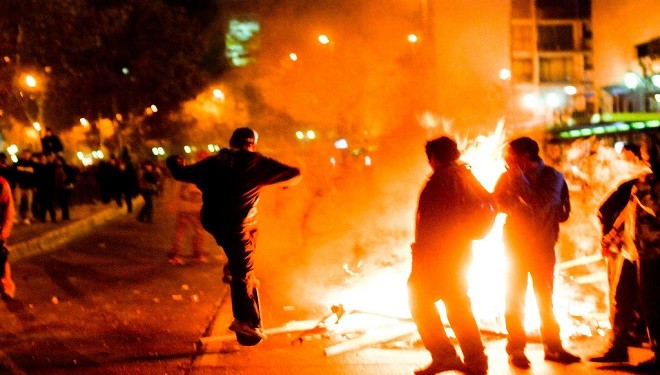 GabriellePickard view more articles
Facebook 0 Twitter 0 Pinterest 0 Google 0 LinkedIn 0
Are we on the verge of societal collapse? Scientists from the University of Maryland think we are. The researchers have developed a new model in a soon-to-be-published research paper. The Human and Nature Dynamics (HANDY) model states that if humans continue down the road of overconsumption of resources and wealth inequality, societal collapse is imminent.

The study was led by mathematician Safa Motesharrei of the US National Science Foundation. The HANDY model paper has been accepted to be published in the Elsevier Journal, the transdisciplinary journal of the International Society for Ecological Economics (ISEE).

The research examines historical data and claims that it shows that the “process of rise-and-collapse is actually a recurrent cycle found throughout history”. According to historical data presented in the report, every complex and advanced civilization is sensitized to collapse, which raises concerns about the sustainability of modern society. The study cites not only the fall of the Roman Empire but also the advanced Gupta and Mesopotamian Empires, as being testimony to how sophisticated, creative and complex civilizations can be breakable and transient.


Looking to the Past

The project uses these past cases of advanced societal collapse to identify the most prominent reticular factors that explain societal decline. The researchers use these salient factors to issue their warning that modern civilization is heading towards a similar collapse.

The components highlighted by the scientists that pose a risk to civilization as we know it, predominantly include:

Depleting natural resources is at the forefront of the HANDY model. Societal collapse, according to the researchers, was more likely to occur if a civilization exhausted its natural resources.

In traditional environmental analysis, the issue of the depletion of natural resources has principally been a problem of overpopulation. In the late eighteenth century, English cleric and scholar Thomas Malthus raised the issue of what he deemed as “inevitable shortages of food in relation to population growth”.

Today, focus of environmental concern has shifted towards worries of climate change. The HANDY model views “the stretching of resources due to the strain placed on the ecological carrying capacity” as a leading factor that can lead to collapse. The researchers cite a “predator/prey model”. As the population of prey increases, the predators feeding on the prey also thrive. When the predators become too numerous, they over-consume the prey and famine results. The other crucial human/nature dynamic that has been ubiquitous in the demise of past advanced civilizations and is relevant to today’s society is economic stratification. The study refers to an “unequal society”, in which the population collapses when the elite population starts to take off. According to the HANDY model, this peaks around year 775 and by year 900, everything has collapsed. Nature then makes a recovery.

The study linked the current high levels of economic stratification directly to overconsumption of resources. The “Elites”, primarily based in industrialized nations, are responsible for both, state the researchers.

“Accumulated surplus is not evenly distributed throughout society, but rather has been controlled by an elite. The mass of the population, while producing the wealth, is only allocated a small portion of it by elites, usually at or just above subsistence levels.” The Guardian

Motesharrei and his colleagues model a range of scenarios which they claim make it difficult to believe collapse is unavoidable. For example, the role of unremitting resource exploitation results in the “decline of the Commoners occurring faster”. The elites might still be thriving but eventually the “Commoners collapse completely, followed by the Elites”.

The HANDY study, while based on historical models, is of course largely theoretical. It is also made up of information that been stated before. For example, in 2012, a paper published in the journal Nature, said human-generated pressures are likely to “drive our planet’s ecosystems to an irreversible collapse”.

The paper was compiled by scientists from Canada, Chile, Finland, the US, the UK and Spain. It echoed previous scientific research warning of the adverse effects of over-consumption, overpopulation, energy scarcity, biodiversity and climate change on the environment.

In 2013, Top Secret Writers wrote an article about the growing concern that as the United States blinkers on the verge of societal collapse, a martial law will be announced.

What I find interesting about the HANDY theory is how quick NASA was to distance itself from the study. NASA was implicated in the story for partly sponsoring the study. As The Guardian’s headline read, “Nasa-funded study: industrial civilization headed for ‘irreversible collapse.”

In the wake of HANDY research reports emerging, NASA officials released a statement saying that the University of Maryland research is an independent study and has not been “solicited, directed or reviewed by NASA.” The statement read:

“As is the case with all independent research, the views and conclusions in the paper are those of the authors alone. NASA does not endorse the paper or its conclusions.”

Why would NASA be so desperate to distance itself from the Doomsday Report? Perhaps NASA knows something we don’t?