How You Can Prevent China Processed Chicken from Reaching US Shores 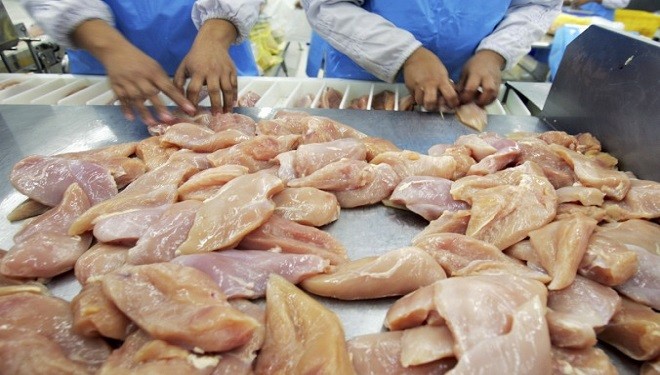 WC view more articles
Facebook 0 Twitter 0 Pinterest 0 Google 0 LinkedIn 0
Despite the fact that China has a deplorable food safety record, we are allowing them to handle our chicken. More importantly, they may also be paid with US taxpayer dollars for offering us this service.

Why we would trust companies in China with our food safety is anybody’s guess. What we know for sure, however, is that China’s food safety woes were highlighted in 2008 when one of the communist party’s darlings knowingly added poison to baby powder which sickened thousands of infants and killed some as well.

Beijing covered up the event so as to not spoil the Olympic party. This is not the type of government we should be trusting our food to.

Be this as it may, Washington has allowed Chinese firms to handle and process our chicken. To make matters worse, that same food could find its way into school lunches and supermarket shelves. Not only does this open the door for more Chinese food scandals but hurts the US economy as well. Outsourcing another product to Chinese producers does not make sense. It is time to send a message to China, but even more to big business. “We do not want nor need the Chinese handling our food!”

Keep reading and I will tell you how you can get involved.


What Is at Stake

At stake is the security of the US food supply. China has proven itself ineffective at policing its own people, and their problems have now turned into our own. Their dry wall causes cancer and untold damage to households across the country. They have once again sold us poisonous animal treats which once again killed our pets, and their tainted medicine caused death across the globe.

The only constant in products from China is their ability to harm those who use them. Now, the Chinese, with help from greedy corporate America, have gotten the green light to prepare the food we eat.

In a bizarre form of government logic, the USDA has stated that China’s slaughterhouses do not meet our standards and cannot provide us meat. They can, however, “process” our chicken. So, let me get this right… China does not possess facilities which are capable of killing and de-feathering birds in a sanitary and healthy manner. These same places can, however, process hunks of that same meat to a level that the US consumers deserve….sounds kind of fishy to me.

Even more troubling is the fact that we may not even know the bird on our plate was touched by the Chinese. Due to questionable loopholes in the labeling system, the food we give to our children could have been handled in the abysmal Chinese factories with little to no safety measures. This mystery meat could have been processed in China but we would have no way of knowing this.

The government could mandate labels stating where the fowl had been processed, but this could simply be averted by selling through middlemen. As a result, the same people responsible for selling rat meat as mutton and diseased pork carcasses as fresh kill will be in charge of putting food on our plates here in the US.

Who Made This Decision?

As if this were not bad enough, the food China ships to us (I have my doubts if this meat will still be American meat or will be switched for inferior Chinese meat) may be eligible for government subsidies. What this means is that school lunches are partially paid for by our tax dollars. This makes sense, after all, we only want the best for our kids.

What we do not want, however, is to pay substandard Chinese companies our hard earned greenbacks just so some greedy American corporations can outsource one more thing to the Chinese. I am sure that there has to be a few Americans who can process chicken just as well as anybody. By outsourcing this task to the Chinese, we rid ourselves of even more jobs.

Another benefit of keeping this work in the USA is that the government can better oversee chicken processing. In this manner they can ensure our food safety, inspect plants and punish wrongdoers, a thing they cannot do to the Chinese.

Unfortunately for us, the decision to put our food safety in the hands of the Chinese has already been taken. It came into effect as of August of last year and there is little we can do, or is there? The answer to this question is an unequivocal “Yes, we can get involved!”

Recently, a petition to keep our people safe from Chinese food was uploaded to Change.org. The petition was written to force our government officials to keep Chinese chicken out of our supermarkets and our schools. Among other things, the website states the following as reasons for these demands:

“…China has earned a reputation as one of the world’s worst food-safety offenders…sales of 46-year-old chicken feet and reports of poisonous fake mutton… are not isolated incidents, but rather the most spectacular instances of a crisis … consumers now smuggle quantities of infant milk formula from foreign countries into China…”

With such a disastrous safety record, can we afford to trust the Chinese with our food? If you believe that we cannot, then sign the petition. I have. Allowing China to Control Us

The problem is that the more we allow the Chinese to effect our economy, the more control they potentially have over us. To allow a brutal communist dictatorship, such as that governing China, to handle anything which is related to national security and safety is a tremendous misstep. Do not forget that China has repeatedly threatened the US with attack and has ramped up that rhetoric as of late. They have threatened us with nuclear attack as a preemptive weapon and have set up no-fly zones to threaten our aircraft and ships.

With China acting in such a manner, we need to look out for our own national security. A way to do this, or at least send them a message, is by signing the petition and telling both China and the US government that we do not want the Chinese touching our food, at least today. Perhaps in the future this could change, but due to their attitude and rhetoric, we need to show Beijing that the people of the USA are watching and we do not like what we are seeing.