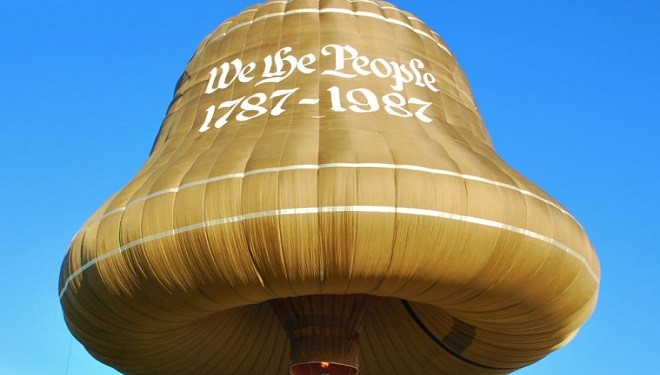 The witness is quoted as saying it was “a massive bell-shaped object hovering in the sky”. The sighting was around 8:15 a.m. as the witness drove west on Chinden Boulevard in Ada County.

MUFON (Case 55952) reported that the witness said, “It [object] just stayed there. In scale, it appeared to be larger than a hot air balloon. I tried asking others about the sighting. They just guessed it may have been a hot air balloon.”

A second witness (MUFON Case 56000) came forward three days later with a similar report and like the first witness, had photos of the bell-shaped object. The man spotted the object as he was riding in a bus around 7:30 am traveling in nearby Boise Bounty, Idaho.

The UFO community was buzzing over the photos and reports of perhaps the most uniquely shaped UFO ever seen. But, there was a logical explanation for this Unidentified Flying Object that had somehow eluded the eye witnesses and others discussing the UFO.

While the UFO photos were sensational, anyone with access to My Meridian Press online could have quickly understood exactly what the bell-shaped object was that had been seen in the skies over Idaho.

On May 1, 2014, the Meridian featured a story about a historic event that took place that morning.

A hot air balloon, the Liberty Bell, took its first flight in 27 years. The bell-shaped hot air balloon was built in 1987 in a South Dakota factory, Aerostar International.

The Liberty Bell was commissioned by Connie Wolf, a record-holding balloonist. Wolf wanted to fly the bell in honor of the bicentennial celebration that marked the historic signing of the United States of America Constitution.

The article explained how Greg Ashton, 52, of Meridian was not only the pilot of the May 1 flight, but now the proud owner of the bell-shaped balloon. What the two eyewitnesses had seen was Ashton’s first flight as the new owner of the balloon he’d help make over 27 years ago.

Having worked in the factory during the time the balloon was made, Ashton was surprised but ecstatic when Wolf contacted him two years earlier about possibly purchasing the balloon.

Ashton had been the first pilot of the Liberty Bell, telling Meridian Press that no one in the factory knew what to expect during the hot air balloon’s maiden flight. They weren’t even sure if the balloon would fly right side up.

To everyone’s relief, the bell-shaped balloon performed perfectly then and now. Ashton reported that at one point the balloon rose to 1,200 feet in the air. One of the distinguishing features of the hot air balloon is the printing on the side that states “We the People, 1787 – 1987”.

The Liberty Bell isn’t just a one-flight balloon. The next scheduled flight was during the 40th Annual Walla Wall Balloon Stampede in Washington. The facebook page for the Stampede posted a photo of the Liberty Bell being inflated.

If Ashton is successful in procuring a sponsor, you just might see the Liberty Bell hovering over your town as it makes its way across the country participating in other hot air balloon rallies.