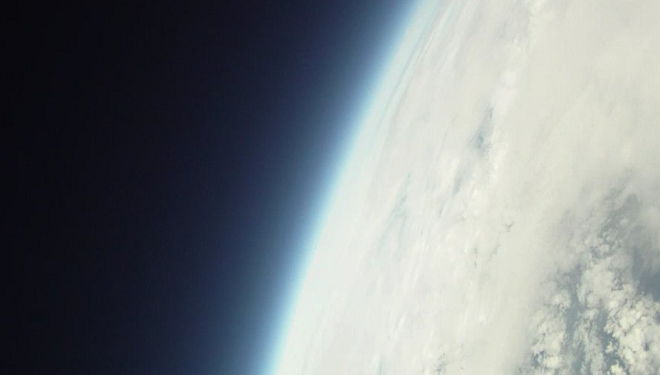 GabriellePickard view more articles
Facebook 0 Twitter 0 Pinterest 0 Google 0 LinkedIn 0
A father and son from Inverness took the quest to photograph the Scottish highlands one step further by designing a helium space balloon and getting a view of the much-loved landscape from space.

38-year-old Barry Fraser and his 12-year-old son Cameron designed and constructed their own weather balloon. The balloon had an assortment of devices and cameras attached to capture images of the curvature of Earth once the balloon reached space.

According to a report in the Daily Mail, in just 1 hour and 48 minutes the weather balloon rose to approximately 19 miles above Earth. When it reached this altitude, the balloon expanded too much and subsequently burst.

What happened to the equipment you might cry? The father and son duo had thought of everything, and when the balloon burst, an attached parachute floated back down to Earth. The equipment landed safely in a forest in the Highlands.

Barry and Cameron managed to track down the device and were thrilled to see stunning images of the Scottish Highlands from the stratosphere. The unique footage included pictures of mountains, cities, fields and the Scottish coastline.

The mission was carried out with the help of an Inverness-based recruitment agency called Orion Group, which provided the Frasers with financial support. Alan Savage, chairman of the Orion Group spoke of a local airbase being a “strong contender to become the UK’s first space port”.

“You know, in the future we might ned to be asked to find engineers working on space travel projects so we thought it would be exciting to get involved,” continued Mr. Savage.

The Frasers are ecstatic about successfully filming the Earth’s curvature from the edge of space. As impressive as the feat of the father and son team was, it is not the first time amateurs have successfully made contact with space. In 2011, a father and son from Brooklyn managed to send a DIY spacecraft 19 miles high into the Earth’s stratosphere.

Housing an iPhone, video camera and GPS equipment in a specifically-designed insulated casing, seven-year-old Max Geissbuhler and his dad managed to bring back impressive amateur footage of space via their weather balloon.

Similar to the Frasers’ mission, the Brooklyn pair’s homemade spacecraft was elevated some 100,000 feet overhead before it burst and came back to Earth. The two found the camera 25 miles away from where it was launched,
You can take a look of Max and Luke Geissbuhler’s recording of the “Blackness of Space” on Vimeo.

Other Missions with Weather Balloons

And it’s not just father and son teams which are seemingly bringing space exploration to the masses. In recent years, school children have lofted a number of weather balloons into the stratosphere. It is also becoming popular to attach meaningful items onto the balloon.

The most memorable to date have been a Lego figure, a Hello Kitty doll and bobblehead figures of Mitt Romney and Barack Obama. So accessible and cost-effective are balloon flights to the stratosphere becoming that they have been made into a commercial venture.

Talking about how weather balloons are a cost-effective way for everyday citizens to explore the Earth’s surface, Maydell told Space.com:

“I was awestruck by the beauty of our planet and the ability to be in space. I really wanted to share that with as many people as possible.”

Weather balloons equipped with cameras and GPS enable you to get an extraterrestrial view of our planet’s most wondrous landmarks.