Atsuta Shrine is a highly-revered Shinto shrine believed to have been built around 71-150 A.D. It’s a major site in Japan. More than 70 ceremonies and festivals are held there annually. However, the public is permitted only in the outermost sections of the shrine property.

Separate from the traditional Japanese buildings is a modern looking structure built in 1966, the Bunkaden, that functions as the shrine’s treasure hall. Within it, lies one of Japan’s greatest treasures. Or does it?

Among the valuable objects in the Bunkaden is reported to be an ancient sword considered one of the three sacred treasures of Japan: The Kusanagi-no-Tsurugi.

The Kusanagi blade is nothing like the well-known curved samurai katana. It’s described as being somewhat like an ancient Greek hoplite sword: straight, double-edged, white metallic and, based on the description by a Shinto priest who supposedly saw it during the Tokugawa Period (1603 and 1868), about 33 inches long.

If you boil it down, the basic beginning of the legend goes like this:

Susanoo, the powerful storm of summer, Amaterasu, goddess of the sun and universe, and Tsukuyomi, god of the moon, were siblings. Susanoo slew an eight-headed serpent, chopping off its many heads and tails. In the fourth tail, he found a sword he called Ame-no-Murakumo-no-Tsurugi (Sword of the Gathering Clouds of Heaven) and gave to his sister, Amaterasu.

Amaterasu, sent her grandson Ninigi-go-Mikoto to bring peace to Japan. To help him with that mission, she gave Ninigi the imperial regalia: the sword, a jewel, and a mirror. Many years later, the sword was given to Yamato Takeru. Then, while hunting with a treacherous warlord, his untrustworthy companion sent flaming arrows into the field where Yamato stood as well as killing his horse so he could not escape.

Yamato swung his sword to cut the grass and make a fire break. While doing this, he found out that the sword could control the wind. So, Yamato made the fire even bigger and sent the fire toward the lord and his men. That’s when Yamato renamed the sword Kusanagi-no-Tsurugi (Grasscutter Sword).

The imperial regalia (sword, jewel, and mirror) were considered the confirmation of the divinity of the emperor as a descendant of Amaterasu and confirmed his legitimacy as sovereign of Japan. 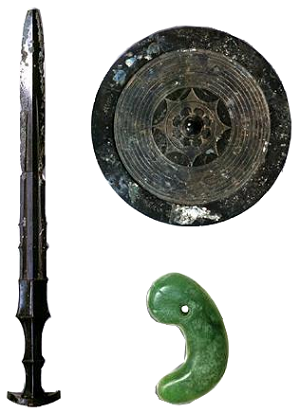 The Imperial Regalia of Japan

The Kusanagi is one of three relics of the Imperial Regalia of Japan. The other two are a comma-shaped stone bead, or “jewel” known as Yasakani no Magatama and a mirror called Yata no Kagami. Together, they represent the three values of valor (the sword), wisdom (the mirror), and benevolence (the jewel). Or, if you subscribe to another interpretation, they bring to mind the stars (sword), the sun (mirror), and the moon (jewel).

These three artifacts have been important in the Japanese imperial enthronement traditions since the seventh century. But, because the ceremony is not public, and these relics are supposedly seen only by the emperor and a few priests, it’s hard to verify where they are, what they look like, or even that they exist at all. There aren’t any publicly-known photographs or even drawings. Officially, the sword, jewel, and mirror are held safely in their enclosures.

In a collection of stories called The Tale of the Heike, the Kusanagi was lost at sea after the defeat of the Heike clan at the Battle of Dan-no-ura in the Shimonoseki Strait on March 24, 1185. Supposedly, the Emperor’s grandmother heard about the lost battle and led the Emperor and his following to commit suicide by jumping into the strait, which is off the southern tip of Honshū. In doing this, she took along two of the imperial regalia: the sword and the jewel.

The tale says that the sacred jewel was found floating in a casket, but the Kusanagi was lost. Is this true? Is the fabled sword hidden beneath the waves? The Tale of the Heike is written about historical events, but it’s an assemblage of poetry that was first passed along orally only to be written down about 200 years later.

Another story says that the sword was stolen by a monk from Silla: one of the three Kingdoms of Korea and one of the world’s longest sustained dynasties with a nearly 1,000-year reign. But, allegedly, the ship on which he was traveling sank. The sword washed ashore at Ise, Japan, and was picked up by Shinto priests.

Was the sword stolen? Was it lost at sea and recovered? Or, did the monk succeed, and was the shipwreck story told to ease the pain of losing a treasure sent from the heavens? 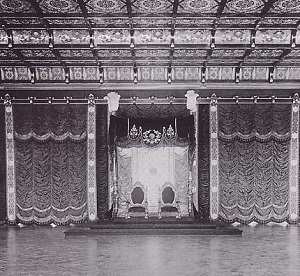 With only a few people being able to view what is presumably the sword, it’s hard to say where it is or even if it exists.

Visitors can’t view the object. Even NHK, Japan’s nationally operated broadcasting organization, went to the Atsuta Shrine in an attempt to film the Kusanagi, but the crew was turned away.

The last time that the sword “appeared” it was for Emperor Akihito’s ascent to the throne. However, it, along with the jewel and two seals of the Emperor, was in a package and unable to be seen.

The Yata no Kagami mirror is purportedly kept in the Ise Grand Shrine, and the Yasakani no Magatama jewel is at the Imperial Palace…Or are they? Like the sword, they are closely-guarded secrets of a fascinating nation’s ancient past.

Japan’s rich cultural traditions and unknown mysteries continue to attract the attention of historians and researchers. But, it’s possible that the world will never know what lies in the Bunkaden.