The Treasure of La Noche Triste 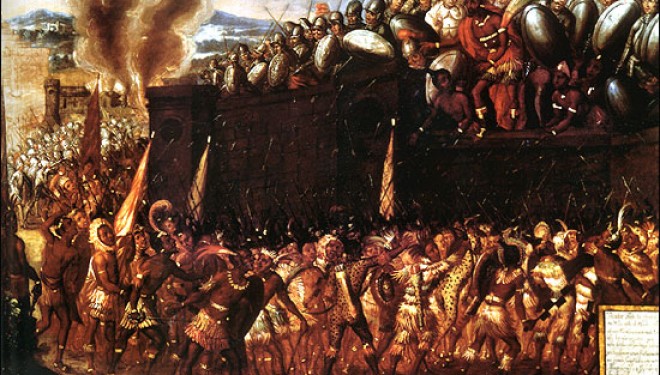 MarkDorr view more articles
Facebook 0 Twitter 0 Pinterest 0 Google 0 LinkedIn 0
One summer night Moctezuma II, leader of the impressive Aztec Empire, walks onto a terrace. He addresses his people, pleading with them to let their Spanish visitors leave the city in peace. And he dies. Perhaps the conquistadores did it. Perhaps his own people. Nobody knows.

And nobody knows what happened to the enormous treasure from La Noche Triste: the “Night of Sorrows”. Hernán Cortés de Monroy y Pizarro, commonly known now as Hernando Cortés, is put in charge of an expedition to explore and secure the Mexican interior for Spanish colonization. But bitterness between Cortés and Governor Velázquez of Cuba results in the recall of the expedition. Hernán ignores the order.

On February, 1519, with about 500 men, 13 horses, and some small cannons, Cortés lands on the shores of the Yucatan Peninsula. He succeeds in a plan to make alliances with indigenous people not only to help him against other civilizations in the New World but also, perhaps, to protect himself.

After winning a battle in Tabasco and receiving 20 young women from the vanquished people, he takes one, La Malinche, to be his mistress. She knows Nahuatl and Chontal Maya and learns Spanish, making it possible for her to take over translations and communicate with Cortés’ next target: the Aztecs.


Ships Sunk and On Toward Tenochtitlan

Hernando learns of the rich Aztec empire from the Tabascans, famously scuttles all his ships to prevent retreat, and takes leadership of Veracruz so that he is under the orders of the king rather than Governor Velázquez.
Moctezuma II, the leader of the Aztec empire, turns down repeated requests to meet Cortés.

So, Hernando decides to be an uninvited guest and marches on Tenochtitlan in August, 1519. Along with him, he brings extra guests: conquistadors and many Tlaxcalteca indigenous warriors and carriers.

After massacring thousands of nobles and burning part of the city of Cholula, the Spaniards arrive at Tenochtitlan. Moctezuma welcomes the Spaniards with extravagant gifts but hopes to understand their weaknesses and destroy them.
Cortés takes Moctezuma hostage in his own palace, using him as a puppet to govern the city.

Hernando will claim later that the Aztecs believed he was either a representative of the god Quetzalcoatl or the god himself. It is quite possible, though, that Cortés was ordering Moctezuma to spread this message, and the Aztecs didn’t buy it.

At this point, Governor Velázquez makes his move to seize Cortés. Around 1,000 men head for Mexico in April, 1520. When he hears of this, Cortés departs to fight him with all of his forces except 200 men left in Tenochtitlan. Hernando leaves the city in the hands of Pedro de Alvaro, defeats the numerically-superior forces of de Narváez, and convinces the survivors to join his cause. But, the elation from that win is not long lived.

The Massacre in the Main Temple

Pedro de Alvaro gets word that an Aztec attack is looming and orders the massacre of priests and nobles at a festival for Toxcatl in the main temple. The Spanish story states that they interrupt a sacrifice, but the Aztecs say the Spanish are drawn to the gold being worn at the ceremony. Outraged, the Aztecs attack the conquistador’s area of the city.

Cortés returns to a very different situation. The Spanish are under siege, and the Aztecs are following a new leader: Cuitláhuac, the younger brother of Moctezuma. Cortés makes Moctezuma walk onto a terrace and tell his people to let the Spaniards leave. Then, Moctezuma is killed by either the Aztecs or Spaniards, depending on the accounts.

The Spaniards find themselves fighting, running out of ammunition and supplies, and in dire straits. Plus, half of the causeways out of the city have been damaged. It seems Cortés asks for a ceasefire and promised to return any treasures in one week.

But, after packing up as much plunder as can be carried, he tells the conquistadors to take as much as they want.
The lure of gold entices the Spanish men to burden themselves with the heavy metal.

On June 30, 1520, Cortés and his army of Spaniards and native warriors depart, heading west in the darkness of night. Reportedly, a moonless night and heavy rainfall make it possible to move through the city unnoticed. But, when they reach a causeway, Aztec warriors spot them.

As a fierce battle breaks out, hundreds of canoes appear out of the darkness with more warriors. Cortés fights across, occasionally using a portable bridge the Spaniards have built to get past any damaged causeways. Conquistadors who fall or are pushed into the lake during the ferocious battle drown from the weight of their treasures.

Cortés and other horsemen with him reach the village of Tlacopan and join up with other wounded and fatigued people who manage to struggle ashore. It is a devastating night for Cortés. Depending on the source, around 400-800 Spaniards are killed along with 2,000-20,000 allies.

Descriptions of the Aztec casualties vary widely from “light” to 100,000 slain. Either way, many Aztecs will die from the smallpox the Europeans brought with them. Along with the conquistadores and warriors, most of the indigenous women with the party are killed. Malinche the interpreter survives along with a few of other women.

The lost gold and artifacts made of gold, precious gems, and other treasures from this event is staggering. It’s been estimated that the missing treasure accounts for half of the largest trove ever gathered in the New World.

Some speculate that much of the treasure was lost in the waters near the causeways. Others claim that the Spanish expedition was not destroyed completely because the Aztecs kept stopping to scoop up gold the Spaniards had dropped. Another idea is that, following the disaster of having Spaniards in the city, the Aztecs buried their treasures in the hills nearby.

Many have searched for this fabulous wealth but not succeeded. Maybe someone will discover it eventually. But, if they do, will they also find the sorrows and others who have possessed it?