Amazing Ancient Egyptian Inventions That Will Blow Your Mind

KaylaDube view more articles
Facebook 0 Twitter 0 Pinterest 0 Google 0 LinkedIn 0
Ancient civilizations, such as ancient Greece and Rome, have invented many things that proved to be useful in their everyday lives, things that were later improved upon and updated and now used in the modern day.

Ancient Egypt gave many contributions to the world, and many people still use the things they created without knowing their origin.

The ancient Egyptians had many unique ideas, and it is remarkable that much of what they invented turned out to be very useful, so much so that we still use those things now.

The Chinese can be credited with creating the first piece of paper, but before that the ancient Egyptians created something similar, which were papyrus sheets. Papyrus was a reed-like plant which grew near the Nile. Papyrus was often used for many other things in their lives, such as mats, sandals, baskets, and ropes. Of course, it also worked well to write on.

The earliest evidence found of papyrus was rather recent, in 2012-2013 at Wadi al-Jarf. It dated back to the end of Khufu’s ruling. Parchment, which was made from animal skins, soon rivaled papyrus scrolls. It soon became more common to use parchment, but papyrus sheets were definitely a large step in the creation of paper.

Ancient Egyptians were very cautious about their appearance and hygiene. Much like today, bad breath was usually equated to bad dental health.

The bread they ate was usually very hard and crunchy, due to the stones they used to grind the flour. This led to very worn teeth or sometimes even the loss of teeth. To cope with this tooth decay, the Egyptians invented mints.

The mints were made from frankincense, myrrh, and cinnamon boiled with honey. They then shaped these into pellets. The process of making mints today is quite similar, except they are now flavored with mint.

As already mentioned, ancient Egyptians were very obsessed with their appearance and hygiene. They usually considered hair unhygienic, but it was also very uncomfortable with all the heat.

For these reasons, they would cut their hair short or shave entirely. Being completely shaven showed high statuses while stubble showed lower statuses. 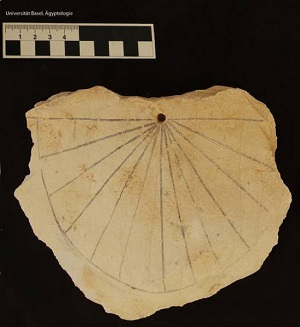 Ancient Egyptians, along with many other ancient civilizations, developed a way to tell time using the sun and the stars. They may have been the first, however, to create sundials that helped them tell the time of day more accurately.

They used the moving shadow of an obelisk to determine morning, afternoon, and evening. They also created a water clock to help them tell time at night. Water would be filled into a cone-shaped structure, which had a small hole at the bottom. The water’s level would fall and pass markings that were carved into the cone to represent hours. Egyptians would check the water level to determine the time. (2)

Make-up was very popular in ancient Egypt. It was worn by everyone, no matter the social status or gender. It was used to give a better appearance, but it was also used to help protect their skin from the harsh sun. (3)

Kohl, which is very similar to the eyeliner people use today, was made from soot and other minerals. It was applied using a small stick to the upper and lower eyelids. They would also use it to paint their eyebrows. Ancient Egyptians also believed make-up had magical qualities and healing powers.

Most people would have had to apply the make-up themselves, but those who could afford it went to cosmeticians to apply it for them. (4)

The next time you apply eye liner or check a sundial remember where these interesting inventions came from. The ancient Egyptians were ahead of their time, from the architectural wonders of the pyramids to inventing the first paper.