WC view more articles
Facebook 0 Twitter 0 Pinterest 0 Google 0 LinkedIn 0
It seems as if foreign lands are not so faraway that the long arm of China’s communist party cannot touch them, as many religious worshipers are finding out.

Unsatisfied with killing religion (1) at home, Beijing (2) now has its sights set overseas. Beijing conscripts Chinese students, tourists and immigrants (3) to enforce its war against believing in anything but communism (4).

“A (Chinese) woman who has been assaulting Chinese people in Flushing due to their practice of Falun Gong, a spiritual discipline, was convicted at Queens Criminal Court on Jan. 8.” (5)

Almost single-handedly, China is reversing a global trend of embracing religion. Indeed, it seems as if China is backtracking to the dog days of the 1960s when religious persecution was a pillar of Chinese society.

“Any Catholic who had not denounced his loyalties to the pope, and who had not made his intentions clear to place the Party above his religion, was targeted as un-Chinese, counterrevolutionary, and unpatriotic.” (6)

It is bad enough that this happens in China, but what right do the Chinese have to enforce such religious constraints on other countries? Simply put, they do not, but in the twisted logic that governs Beijing, by hampering freedom of religion overseas, they are merely looking out for Chinese interests (7). What this means is that not only do Chinese living in any country still have to bow to Beijing, but we are being forced to accept this too.

“Chinese intelligence officials have confirmed to Fairfax Media that they are building networks to monitor the ethnic Chinese community to protect Beijing’s ‘core interests’.” (9)

China’s ruling powers believe in “Hanifying” its ethnic areas and the world. Essentially this means to reach out to the global Chinese diaspora and ask those people for a helping hand. This tactic is used to convince Chinese immigrants (10) to do everything from stealing tech for Beijing (11), to strong-arming foreigners into taking a conciliatory tone with China.

Beijing’s charm offensive is aided by university guidance groups (12) that spy on the Chinese who are not spying for China (13) and committing unpatriotic acts such as admitting the Dali Lama is the spiritual leader of Tibet.

Things have gotten so bad that Australia (14) just announced that its schools are being overrun by these Chinese student/spies (15). Not the typical James Bond types, these people act more like thought control storm-troopers. Ecstatic that they can protest and not fear facing the muzzle of Chinese tanks, these students take to the streets and deride leaders they don’t like, surround protesters who don’t like them and, as they say in Hong Kong, “swarm like locusts”. Their goal is to intimidate and crowd out dissenting voices.

Another prong in the trident of intolerance is by coercion. The communist party seeks out the families of non-conforming Chinese, beats, threatens, jails and or disappears them for the “indiscretions” (16) of their children or family members. Think this is untrue, then ask Cheng Guangcheng (17), whose brother who has been beaten like a rented mule and imprisoned for nothing more than the actions of Chen. 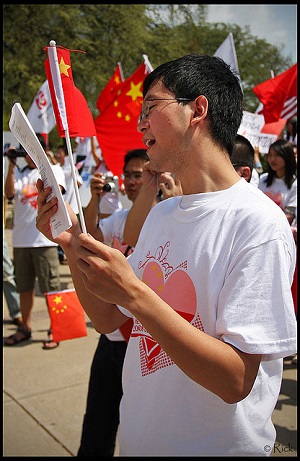 With more Chinese studying, traveling and immigrating, Beijing has many more people to do its bidding. The communist party reminds those people of their duty to the motherland and to help out when necessary (18). The impact is that Beijing is crowd-sourcing espionage.

Those spies who China claims are not spies are keeping an eye on the government of their host country (19) and also reporting what their compatriots are up to. Say a good word about the Dali Lama and your mom gets a thump on the noggin’; claim that Taiwan is a country, and your uncle is stuffed into a box for the weekend.

Woe to the person who aligns himself with Xinjiang Independence, for example, for his actions will be reported to Chinese friendship, aka spy centers, who inform Beijing. The extent of his infraction will dictate Beijing’s response. At a minimum, he will be advised by his Chinese neighbors that his behavior is unacceptable.

Like I mentioned, this behavior exposes Beijing’s aggressive stance in muzzling spiritual beliefs in other countries. Through networks, Chinese seek out practitioners of various religions and tell them they cannot worship. The import of this is that China has been exporting religious persecution overseas, and now it’s affecting you and I as well.

These same Chinese associations use many means to accomplish their goals. These range from charm offensives, protests and outright deception. The Chinese are proud of their country and even refer to it as their “mother”. It stands to reason that they want us, too, to like their mom.

In order to ensure that we do, Chinese are taught how to interact with us and show the good of China. Thus, they steer conversations away from those painful truths such as how Tibet was stolen by China, for example. By appealing to our naivete and ignorance of Chinese history, theses people paint a pretty picture of the new China. They ramp up the noise should a country dare to offend the motherland.

When they feel that the ‘motherland’ has been wronged, Chinese turn to aggression and or violence (20). Such was the case during the 2008 Olympic (21) torch relay (22). Some were even so upset with countries such as France and the USA that their flags were hung upside down in effigy across Beijing.

Chinese nationals also oppose Falun Gong practitioners and have literally resorted to violence against them in many countries. The same holds true for most any group which has run afoul of Beijing’s sensitivities.

It should be noted that the Chinese are doing in our countries what neither they nor I could do in theirs. Should they march in Tienanmen they’d be staring down the muzzle of a tank, and if i did it, I would be lucky to leave China alive. Beijing believes that freedom of expression is our ‘Achilles heel’ and exploit our laws in order to bring its compatriots under control.