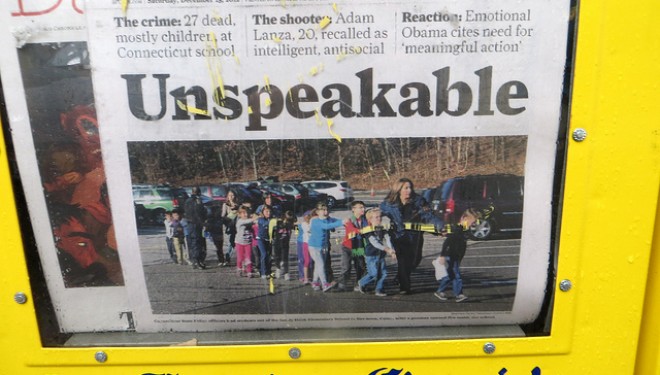 As the 24-hour news channels followed a horrific scene unfolding minute-by-minute, there was a number of accusations, assumptions, and assertions being made by news analysts and the general public prior to all the evidence being discovered.

As a result, a number of conspiracy theories surrounded the shooting and the reasons behind it.

In some of the cases, the evidence actually debunks the theory; however, that are still some strange facts surrounding the Sandy Hook Massacre that cannot be easily explained away.

At the beginning of the year, someone not really believing the “official” statements concerning the shooting began to dig around. In researching the area, the person (who had a blog that has since been removed from WordPress) discovered a strange anomaly in the property ownership of many of the victim’s homes. (1) It appeared that most if not all of the homes that are claimed to be the victims’ homes ran along a particular pipeline and all of those homes were sold on the same day in 2009.

Strangely enough, the researcher states that all of the homes were either owned by city or state government. Though this may be strange at face value, it would appear the researcher conducted his inquiry completely via the Internet and did not go to the state assessor’s office.

Through some digging by others interested in the case, those researchers found there was nothing truly anomalous about the ownership. And the date discovered was nothing more than a default date used in a computer database when no date was given. Though seemingly strange, it seems this could be explained away with a trip to the assessor’s office.

One of the major conspiracy theories surrounding Sandy Hook is the idea that the entire thing was a hoax perpetrated by the government to further some political agenda. Though the actual agenda can rarely be agreed upon by the theorists, one of the major theories is that all of the victims and their parents were actors and Sandy Hook was staged.

In support of this theory, a poster at IGN states that the perpetrators of the hoax actually mixed up the actors and interchanged the “victim” with her “sister” allowing for the “victim” to attend her own memorial service. (2)

Though the two girls do look look the same, there are a number of more plausible possibilities rather than mass conspiracy: The girls looked similar or being sisters they had the same dress. This theory of the mass use of actors just seems too implausible and until someone comes out and states, “I am a Sandy Hook actor”, this debate will rage on. Another reason why many point to some clandestine conspiracy or even a false flag operation on domestic soil is the fact that many of the parents’ or witnesses’ reactions seem to be out of place for the situation at hand. (3) Many point to a press conference held by Robbie Parker (father to one of the victims) who was seen laughing and smiling right before the start of the press conference. (4)

Or, a picture taken during a memorial for the victims of the shooting where the families are again laughing and smiling right before they mourn for their children (5). Though laughing does seem out of place, everyone does handle grief differently. Moreover, there have been a number of funerals, wakes, or memorials held where laughter is heard when reminiscing about those loved ones who have passed on. Many psychologists will state that laughing is often a coping mechanism deployed to get one through a very serious or stressful situation.

There is no doubt that there are a variety of strange facts surrounding the tragedy that occurred at Sandy Hook Elementary.

However, none of these are the smoking gun needed to prove that there was a deep conspiracy working behind the scenes towards some clandestine ulterior motive.

Many can be explained away or at least have a more plausible reason behind them.

However, there are some that still linger having us wonder…”what if?”

The Chuck E Cheese Conspiracy: Do They Really Recycle Pizza?