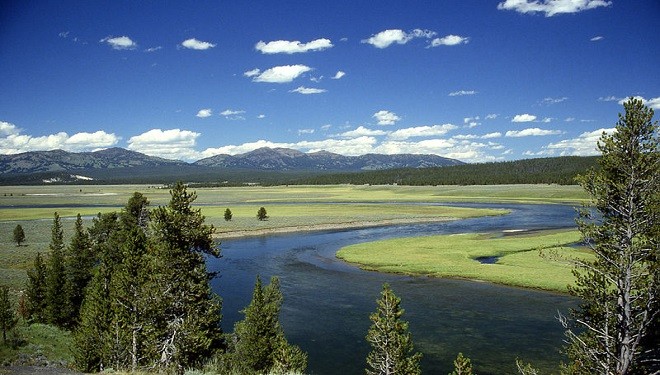 GabriellePickard view more articles
Facebook 0 Twitter 0 Pinterest 0 Google 0 LinkedIn 0
As Top Secret Writer reporter (1) Dennis Dufrene wrote in 2013, a super volcano only erupts every 60 to 80 thousand years. This starkly contrasts with regular volcanos, in which 60 to 80 typically erupt each year.

There are many well-established, (2) scientifically-proven signs that a volcano is about to erupt, the most obvious being seismicity. But is there any way of knowing that a super volcano is on the brink of erupting?

The answer could possibly be found in Yellowstone, though park officials might pretend otherwise.

A 3.3 mile stretch of road in Yellowstone National Park has been temporary closed. The reason for the closure is due to the fact the road has melted. In a (3) press statement, park officials said the extreme heat from the surrounding thermal areas caused the oil to bubble and melt on the road’s surface. So severely has the tarmac melted that it has damaged the blacktop and has resulted in unsafe driving conditions.

The stretch of road in question is one of Yellowstone’s most scenic and popular locations, off the Grand Loop Road between the Madison Junction and Old Faithful. This popular loop takes visitors past the Firehole Lake, White Dome Geyser and the Great Fountain Geyser.

Talking of the closure, Dan Hottle, a Yellowstone spokesperson (4) said:

“It basically turned the asphalt into soup. It turned the gravel road into oatmeal.”


Is the National Guard Preparing for an Eruption?

The officials are also insisting that the “oatmeal” and “soupy mess” was caused by the underground heat from the park’s super volcano combined with the recent high temperatures. The officials also noted they were evaluating how to address the problem.

Yellowstone does of course sit atop the caldera of an ancient super volcano. Admitting that they have seen “this kind of thing quite a bit”, caused by problems associated with underground heat and shifting earth, one might expect that Yellowstone officials might have addressed such problems earlier.

Or could it be they are downplaying the danger that the road-turned-soup is a sign that the Yellowstone super volcano is about to erupt because they fear losing visitors?

Before Its News shared Lupshu’s video, excitedly claiming that the video shows the National Guard preparing for a Yellowstone “event”. Before Its News takes much pleasure in (6) dramatically stating:

“Since they are [National Guard] preparing for this incident and its aftermath, we should also be.”

The site goes on to warn that we should be stocking up on as much food and water as possible to ensure “we are armed” for when the super volcano erupts.

Is the Danger Real?

The speculation that Yellowstone’s volcano is about to erupt follows similar panic earlier this year. (7) Videos were posted on the Internet of bison and other animals fleeing the National Park, prompting theories of seismic activity and an impeding super volcanic eruption.

The belief that animals can detect looming volcanic eruptions has been around for some time. In March 2014 (8), videos were posted on YouTube showing a herd of Bison racing down to road deeper into the park. Such an incident took place in February 2014; and in March, a 4.8 magnitude earthquake struck Yellowstone. The earthquake was the strongest the park has experienced since 1980.

Naturally, the fact an earthquake hit Yellowstone not long after the bison bolted, spurned speculation that the earthquake could soon set off the park’s super volcano.

A (9) study has proven that ants are able to sense quakes before they strike. Whether bison have such psychic intuition remains unproven.

What is more certain is that bolting bison, melted roads and recent earthquake activity are collectively fueling the theory that Yellowstone’s mighty super volcano is on the brink of eruption.