How CIA Partnered With Amazon to Spy On You 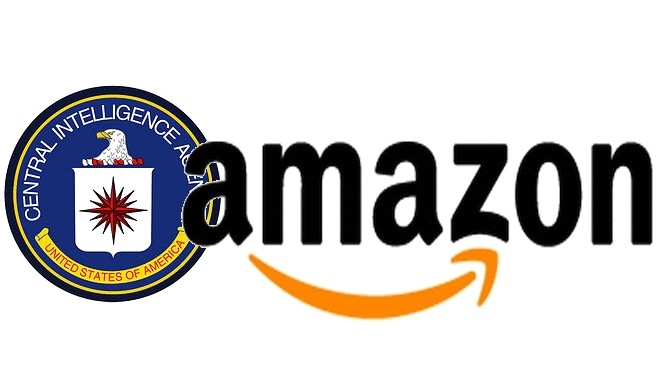 Dennis view more articles
Facebook 0 Twitter 0 Pinterest 0 Google 0 LinkedIn 0
In April 2013, TSW reported on the fact that the CIA picked Amazon to create an interdepartmental cloud to facilitate the exchange of information.(1) Not even a year and a half later, it is being rumored that the CIA has implemented and gone live with their personal cloud.

This cloud will allow the 17 agencies that make up the so-called intelligence community to be able to quickly share and update information amongst themselves. Such an implementation has many people around the world wondering how a partnership between the world’s largest e-commerce site and the world’s most notorious spy agency will affect not only the privacy of the global citizenship, but also their lives in general.

Last year when we reported on the Amazon/CIA partnership, it was barely a rumored whisper in the wind. Rumors floated around for some time and, of course, when journalists questioned the CIA about the partnership, they deflected. In 2013, the CIA said in a statement:

Which is not surprising, to say the least. Honestly, what does the CIA really own up to? However, back then we determined that if the rumor was true, it would be a partnership that would benefit both parties.

“It will provide a much needed private cloud infrastructure to the CIA; meanwhile, Amazon is provided the opportunity to expand into the government sector.” (1)

However, at the time, it was too early to speculate about how that partnership would affect the rest of the world. Now, with the implementation complete and the rumor that the CIA has gone live with their cloud-based infrastructure, what exactly can the world expect?

TheLastGreatStand.com considers the CIA/Amazon partnership “the equivalent of an adrenaline shot to the chest”. (2) This statement is supported by what John Pirc, a former CIA cybersecurity researcher and Chief Technology Officer at NSS Labs to the TLGS:

“What it allows them to do is spin up servers and add more [computing power] fast, and when you’re computing intelligence data, the more compute power you have, the faster you can react.” (2)

Pirc goes on to state that this allows the CIA to analyze information in a matter of seconds instead of hours. DefenseOne describes the CIA cloud as “In time, the cloud’s full capabilities are expected to usher in a new era of intelligence sharing and cooperation even as the IC collects ever-greater amounts of data from sensors, satellites, surveillance efforts and other sources.” (3)

In agreement with Pirc, DefenseOne sees the implantation as a new age spying. With access to vast amounts of computing power and the ability to share that information in seconds the CIA will be a spy agency like the world has never seen.

Many believe it is another nail in the coffin of privacy and the spy agency will usher in an era of “Big Brother Hell.” (4) A group called RootsAction was passing around a petition to require Amazon to sign a legally binding contract stating that it would not pass user purchase information to the CIA.

“The relationship means that Amazon — logoed with a smiley-face arrow from A to Z, selling products to millions of people every week — is responsible for keeping the CIA’s secrets and aggregating data to help the agency do its work.” (4)

Solomon goes on to basically describe Amazon as the trigger-man for a heavy-handed U.S. president.

No One Is Talking

The fact remains, just as it did last year when TSW first reported on the CIA/Amazon partnership, that neither the CIA or Amazon are talking, which leads to a wide variety of speculation.

Will Amazon become a partner in crime if the President chooses to abuse the power of the CIA?

Will the CIA have the computer power to go rogue and unrivaled?

Will the CIA use this computing power solely of the analysis of data to protect the country against foreign threats?

Unfortunately, the implementation of the cloud is too new to answer any of these questions. We will simply have to wait and see. By the time we figure out the overall impact, it may be too late to do anything about the freedoms we’ve lost in the process.