Could Humanity Be in Danger from Ancient Giant Viruses? 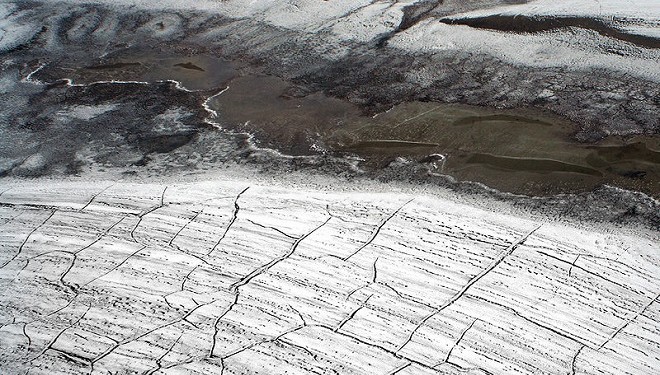 GabriellePickard view more articles
Facebook 0 Twitter 0 Pinterest 0 Google 0 LinkedIn 0
The scenario of an ancient giant virus awakening from an almost infinite slumber and threatening the safety of humanity sounds like a story aroused in the imagination of Steven Spielberg. According to researchers, this fictitious-sounding situation could soon become a reality.

Pithovirus sibericum, which is in the same family as the recently discovered class of giant viruses, was found buried deep in the frozen grounds of Siberia. When taken to the laboratory by researchers from France, this large virus sprang back to life.

Following a 30,000 year nap, the giant virus has now awakened. According to (1) reports, the virus can only infect amoebas, a tiny, one-celled organism which lives in fresh water and salt water.

The researchers who made the discovery say the contagion poses no threat to the health of animals or humans. They do, however, fear that other ancient viruses lay dormant in permafrost and could also be awakened if the frost thaws.

At 1.5 micrometers in length, the newly thawed virus is the biggest virus ever to be found. It is so large that, unlike other viruses, the recently discovered ancient virus can be seen under a microscope. Jean-Michael Claverie and his wife Chantel Abergel of Aix-Marseille University in France led the project.

The evolutionary biologists named the virus Pithovirus Sibericum, inspired by the word “Pithos”, Greek for a large container used to store food and wine.

Having been frozen in frost sometime around 28,000 BC, the French researchers say this is the first time they have discovered a virus that is still infectious after such a long amount of time.

The permafrost region in Siberia where the virus was found is becoming warmer and more accessible, attributes which one of the researchers described as being “a recipe for disaster”.

“If you start having industrial explorations, people will start to move around the deep permafrost layers. Through mining and drilling, those old layers will be penetrated and this is where the danger is coming from,” Professor Claverie told the (2) BBC.

The professor went on to warn that ancient strains of the smallpox virus, which some 30 years ago were declared eradicated, could pose as a potential threat to humanity.

“By going deeper we may reactivate the possibility that small pox could become again a disease of humans in modern times,” Professor Claverie added.

Despite Pithovirus sibericum becoming active again, the scientists admit that it is not clear whether all viruses could become reactivated after being frozen for thousands, even millions of years.

Commenting on the research, Professor Jonathan Ball, a virologist from the University of Nottingham in the UK, referred to the fact that a virus is still capable of being infectious after so many years as “pretty astounding”.

As Professor Ball states, just how long other viruses could remain in permafrost depends on how robust the individual virus is.

Viruses with an outer protein shell, such as the ones that cause the common cold and foot and mouth disease, tend to be stronger than if they have a more lipid shell, such as HIV and flu, Professor Ball explains.

While it is unlikely the giant virus discovered in Siberian permafrost could endanger humanity, what the study does demonstrate is that viruses can survive in the frozen layers of soil found in Arctic regions. This permafrost has typically existed for more than 30,000 years, which corresponds to the Late Pleistocene era.

The finding has important implications in terms of the potential risks caused by both the exploitation of mining and global warming.

This is not the first time potentially deadly viruses have been associated with climate change. As Top Secret Writers reporter Jen DesJardins (3) wrote in June this year, the warmer climate is posing a greater risk for the spread of the West Nile virus.

The West Nile virus is believed to be the cause of West Nile encephalitis, an infection of the brain.

Though the surmise that melting ice would release viruses that could be harmful to humans is cited as ludicrous by some, Curtis Suttle, a virologist at the University of British Columbia in Vancouver, is quick to point out that humans inhale thousands of viruses each day.

The prospect of melting permafrost uncovering deadly viruses, (4) according to Suttle, “stretches scientific rationality to the breaking point”.