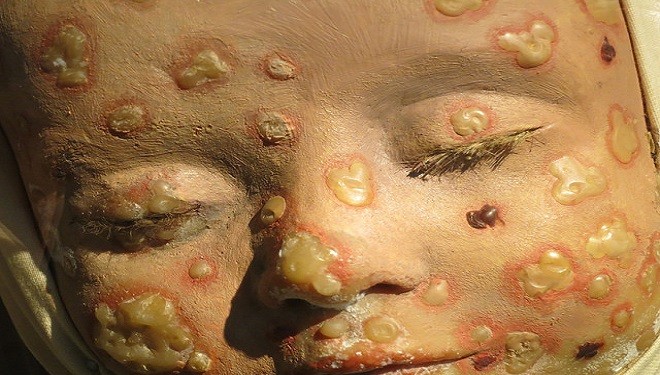 SallyPainter view more articles
Facebook 0 Twitter 0 Pinterest 0 Google 0 LinkedIn 0
On July 1, 2014, the US Food and Drug Administration (FDA) employees discovered a cache of some of the deadliest viruses in a cold-storage closet on the National Institutes of Health (NIH) campus in Bethesda. Among the 327 vials found in cardboard boxes, six were marked as smallpox virus. (1)

This is just the latest in a series of near mishaps by federal agencies responsible for safeguarding the public from deadly biological samples used in research. In June 2014, it was discovered that the deadly anthrax virus was sent to three labs, possibly exposing unsuspecting employees to activated anthrax. (2)

An inventory of the discovered cache of deadly viruses at the NIH facility was taken. Among the 327 vials, six were “variola”, which is the causative agent of smallpox. 10 samples were unidentifiable due to “unclear labeling”. These were transported via aircraft to the CDC (Centers for Disease Control and Prevention) Atlanta high-containment facility.

32 samples (28 normal tissue and 4 vaccinia) were destroyed. Vaccinia is the virus that’s used to make the smallpox vaccine, but isn’t smallpox. The remaining 279 samples were sent to the US Department of Homeland Security’s National Bioforensic Analysis Center “for safeguarding”.

Ever since the 9/11/01 terrorists attacks on the US, officials have expressed concerns that a weaponized smallpox virus might be used as a biological weapon. The smallpox virus has two clinical forms, Variola major and Variola minor.

Variola major is the most severe form of smallpox and also the most common (90% of all smallpox cases were Variola major) with a 30% fatality rate. There are four types of Variola major smallpox: ordinary, modified, and the rarest forms flat and hemorrhagic; both usually fatal. Variola minor is less severe with a 1% mortality rate. (3)

The investigation is ongoing to determine the origin of the samples. It’s believed they were collected between 1946 and 1964. The FDA stated that all of the infectious samples were labeled and had been stored in “glass, heat-sealed vials that were well-packed, intact, and free of any leakage, and there is no evidence that anyone was exposed to these agents”.

The FDA stated that it was “reviewing its policies and procedures in order to implement a corrective action plan so that potentially hazardous samples are never overlooked in the future”.

On July 16, 2014, the FDA reported that during their July 1 investigation, “12 boxes containing a total of 327 carefully packaged vials labeled with names of various biological agents such as dengue, influenza, Q fever, and rickettsia” were found. (4)

The FDA also emphasized that their employees had followed “standard protocol and turned them [vials] all over to the appropriate NIH safety program officials”.

No one knew at the time of the July 1 discovery of hundreds of forgotten virus vials whether or not any of the viruses were still active. This didn’t prevent the reporting that the vials were active and deadly.

The FDA was quick to assure the public that the vials were still sealed and undergoing a two-week testing. It was speculated that the freeze-dried viruses were inactive due to the cold storage not having been in use since 1972 when the CDC turned over the lab to the FDA.

Mystery How Samples of Deadliest Viruses Were Forgotten

The question of how such a mistake could have been made remains unanswered and is part of the investigation currently being conducted by the US Department of Homeland Security.

A July 8, 2014 CDC media release explained that the Bethesda laboratory was one of several that the NIH transferred to the FDA in 1972. The transfer was in compliance with the new guidelines giving the FDA responsibility for “regulating biologic products”. (5)

The CDC also explained that the area where scientists discovered the forgotten vials had remained unused since the 1972 transfer. It was during preparations to move the laboratory to its new location on the FDA main campus that the vials were discovered.

Up until the vials were discovered, it was believed that the only known live smallpox virus samples were kept in secured sites located in the US and Russia under the direction of the World Health Organization (WHO). All other samples were supposed to be destroyed, but somehow that didn’t happen in the storage facility.

Many scientists are adamantly opposed to keeping live viruses of deadly diseases, such as smallpox, believed to have been eradicated by the 1980s. They advocate that such viruses be destroyed while other researchers oppose destroying deadly viruses, citing a need to study them in order to develop more effective treatments and vaccines.

Perhaps the most chilling fear this discovery brings to mind is how many other forgotten cold storage closets of deadly viruses there might be throughout the world.