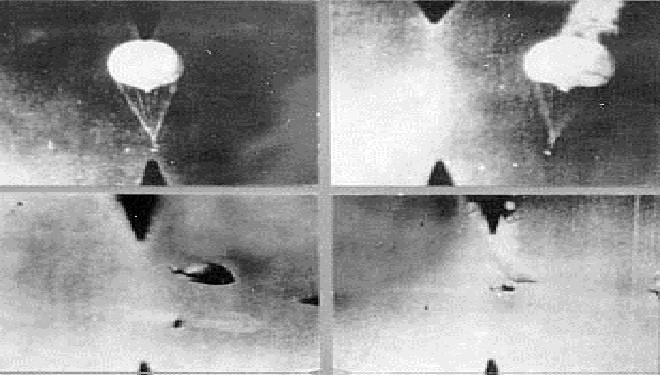 Dennis view more articles
Facebook 0 Twitter 0 Pinterest 0 Google 0 LinkedIn 0
There is no doubt that many UFO sightings and reports are the result the secret testing of various corporate (1) and government projects (2).

With such a precedent already being established, we can look back on some of the other more famous UFO cases that have not been solved to see if such a theory could be applied. Even though secret testing may not be able to explain every case, it may be able to shed light on some, which would allow us to focus our attention on those that truly escape explanation.

One such case where the secret government project test may be applied is the infamous report of the Battle of LA.

On February 24th, 1942, only a few months after the U.S. declared war on Japan following the bombing at Pearl Harbor, warning sirens went off at about 10:30 pm. The sirens were to warn the people of Southern California of an impending attack.

The military began taking up positions preparing for an impending attack. Finally, roughly four and a half hours later, the aircraft was within range for identification. However, no real identification could be made. The only thing that the U.S. military could ascertain was that the flying object was neither commercial nor private aircraft. The order was given to fire on the object in fear it was part of some Japanese raid.

For a solid hour, the military unleashed hell on the mysterious aircraft. According to military sources, when the order was given:

“The Military fired over 1400 rounds of 12.8 pound anti-aircraft artillery at the UFO. The object kept moving from Santa Monica to Long Beach and seemed to have no damage done from the barrage of shells that were fired at the UFO.”

Nevertheless, the object in the sky continued on its course, apparently undamaged by the defensive barrage. Yet, on the ground, cars and buildings took on damage and three people died…all from friendly fire. The official report stated the entire incident was the result of a weather balloon that incited a moment of frenzy because of wartime jitters. (4)

Immediately, the press yelled cover-up and decades later Ufologists theorized that the cover-up was to hide the existence of extraterrestrial visitors. However, there is another theory, which states that the UFO was misidentified as a weather balloon when in reality it was actually a Japanese balloon bomb.

The Japanese began mapping the world’s air currents in the late 1930’s and early 1940’s. By 1944, they had a viable intercontinental weapon: the balloon bomb. According to National Geogrpahic (5):

“The first balloon was launched on November 3, 1944. Between then and April 1945, experts estimate about 1,000 of them reached North America; 284 are documented as sighted or found, many as fragments.”

However, the Battle of LA sighting only occurred two year priors to the first active launch. Putting it smack in the middle of the probable testing phase of the weapon. It was these bombers that caused the only fatalities on American soil during WWII.

PBS Investigations learned that the official policy of the U.S. was to keep the existence of the balloon bombs a secret during the height of it’s use. “The existence and purpose of the Balloon Bombs were kept secret from the American public for security reasons until a tragic accident forced a change in policy.” (6)

The idea that a balloon bomb reached American soil during its testing phase or the possibility that the Japanese began using the weapon earlier than thought is just another possibility. Yet, if we factor in the fact that the military stated that the UFO was a misidentified weather balloon along with the active attacks by the Japanese on the U.S. coast, it does push the theory into the realm of plausibility.