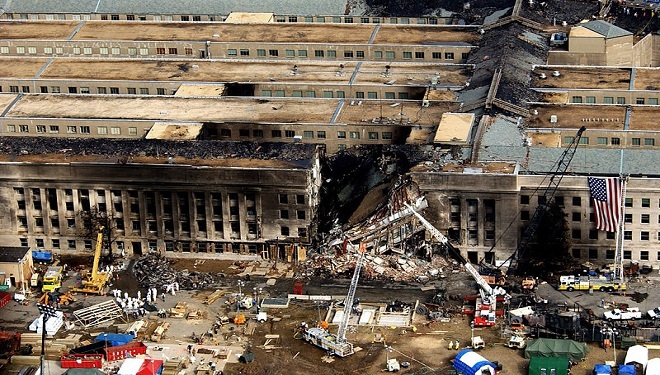 GabriellePickard view more articles
Facebook 0 Twitter 0 Pinterest 0 Google 0 LinkedIn 0
Within 30 minutes of two planes hitting the twin towers of the World Trade Center, a hijacked Boeing 757 bound for Los Angeles crashed into the west side of the Pentagon, loaded with 10,000 gallons of fuel and traveling at 345mph.

Questions and doubts related to the 9/11 attack on the Pentagon began to surface almost immediately, namely that a missile was responsible for the attacks rather than a plane. The fuel for the Pentagon conspiracies stemmed primarily through the lack of public photographs of a 757 crashing into the Pentagon.

Despite numerous conspiracy theories in circulation about the 9/11 Pentagon attack there is overwhelming evidence that proves a plane, not a missile, struck the Pentagon.

Take a look at some of the current 9/11 conspiracies surrounding the Pentagon attack and the evidence that proves these theories are nothing more than unsubstantiated collusions.

Despite the fact dozens of witnesses saw a Boeing 757 hit the Pentagon, many conspiracy advocates insist a missile was responsible for the devastation.


Conspiracy Theory 1 – Holes Were Too Small

One of the most popular conspiracies surrounding the 9/11 attack is related to the size of the holes created by the impact of the crash.

Immediately after the attack, two holes were visible on the building, a 75ft-wide entry hole in an exterior wall and a 16ft-wide hole in the Pentagon’s middle ring.

“How could a plane 125ft-wide and 155ft-long fit into a hole that just 16ft in width?” ask the conspiracy theorists.

Evidence that completely shuns this theory can be found in the (1) ASCE Pentagon Building Performance Report. In reality, the exterior façade of the building collapsed approximately 20 minutes after the crash occurred but the ASCE based its report on the original hole which was found on the support columns on the first floor which were damaged or destroyed.

But that still doesn’t explain why the width of the hole didn’t correlate to the width of the plane. Mete Sozen, ASCE team member and professor of structural engineering at Purdue University explains all.

According to Sozen, a crashing plane doesn’t punch a “cartoon-like outline of itself into a reinforced concrete building.” In the case of the 757 that hit the Pentagon, one wing hit the building and the other was forced off by the impact with the building’s load-bearing columns. The remains of the plane then entered into the building in a state “closer to a liquid than a solid mass.”

One would think that if a plane travelling at 345 mph hit a building, the first thing to shatter would be the windows. This popular assumption about glass shattering under forceful impacts gave conspiracists plenty of fodder to feed off.

Pentagon Strike, an online animation site, (2) claims that the photos which showed the windows were still intact, even directly above the crash site, proves a missile or much smaller aircraft must have hit it.

The truth of the matter is that whilst many of the Pentagon’s windows did remain intact on 9/11, they were blast-resistant, so isn’t that what they were supposed to do? 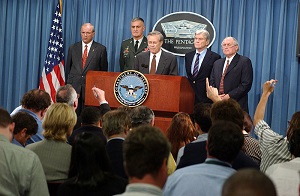 Conspiracy Theory 3 – And What about the Debris?

Another popular conspiracy theory involving the Pentagon is that there was no plane wreckage. By stating: “In reality, a Boeing 757 was never found,” Pentagon Strike begs the question, “What hit the Pentagon on 9/11?”

Despite claims that a “plane was never found”, Allyn Kilsheimer, the first structural engineer to arrive at the Pentagon following the attack to help coordinate the rescue mission, says there “was absolutely a plane”.

“I saw the marks on the plane wing on the face of the building. I picked up parts of the plane with the airline markings on them. I held in my hand the tail section of the plane, and I found the black box,” said Kilsheimer.

Which brings us on to the black box.

Further evidence that it was indeed a plane that hit the Pentagon is the fact that (3) workers recovered the “black box” flight data recorders from the collapsed part of the building where the place slammed into it.

“Black boxes” are compulsory equipment in every commercial or corporate jet. They include the flight data recorder and a cockpit voice recorder. They are typically kept in the tail of an aircraft where they are most likely to survive a crash.

The fact the black box data was found in the Pentagon wreckage is evidence that a plane crashed into the building.

The black boxes were not the only items recovered from the wreckage that proves it was a plane that crashed into it. A (4) set of flight attendant’s wings and a pin was found in the debris and put into the unclaimed personal effects from the 9/11 attacks. The items were eventually transferred to a military unit designed to return personal effects to victim’s families, known as the Joint Personal Effects Depot (JPED).

As we can see, there is overwhelming evidence to prove that the Pentagon was hit by a plane on 9/11. In light of the evidence, the disrespectful 9/11 Pentagon conspiracy theories need to stop.