This Implant Could Heal You: Will Drug Companies Suppress It? 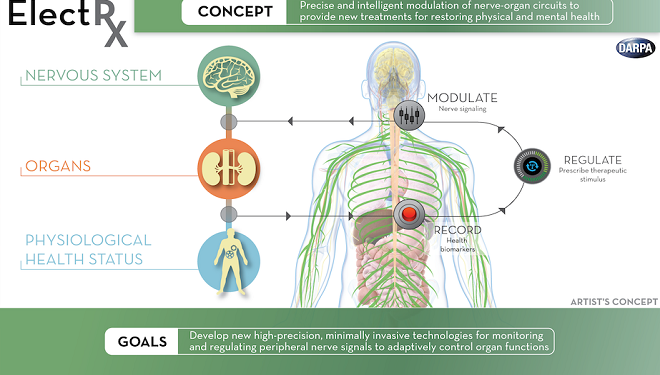 Reported by CBS News, the Pentagon has requested that DARPA undertake the development of new technology to be used by the average person. The project is to develop a minute device (small enough, nerve fiber size, to be injected by needle) that can be implanted precisely where needed inside the body to stimulate healing via electrical impulses.

The hope is that such implants could possibly treat various neurological disorders due to head trauma and even mental health diseases, such as PTSD (Post-Traumatic Stress Disorder) and even depression. Other diseases could possibly be stopped before they can spread and overpower the body’s natural defense mechanisms.

Stimulating the body’s natural electrical system for healings isn’t new. Chinese acupuncture has been using this technology for over 10,000 years with the original acupuncture needles being finely chiseled from stones and later replaced with metal ones. (1)

DARPA plans to advance this science so that the device can monitor the body’s organs and stimulate self-healing at the moment of infection or injury. (2)

The program is called “Electrical Prescriptions” (ElectRx for short). The goal of this self-healing stimuli is to reduce human dependency on pharmaceuticals. Present vision of the device is along the lines of a small “intelligent” pacemaker that would be implanted in the body and give a constant readout of the individual’s health condition. In addition, the device could stimulate nerves when necessary to “maintain healthy organ function”.

According to North American Neuromodulation Society, the biological process known as neuromodulation is natural and responsible for monitoring the body’s systems. The device will mimic this process similarly to ones already used in therapeutic alterations of “activity either through stimulation or medication, both of which are introduced by implanted devices”. (3)

Since illness or injury can interfere with these natural processes of the body, individuals are unable to self-heal as nature intended. According to CBS News, DARPA states that neuromodulation can sometimes worsen the condition and even compromise the immune system by weakening it.

That’s where the DARPA “electrically charged implant” will take over by stimulating the nerves in a healing pattern to correct the disrupted signals. The current technology is roughly the “size of a deck of cards” and can only be implanted by “invasive surgery”.

In 2012, DARPA announced that it had made great advances in electronics that can dissolve completely in liquid. (4)

These biocompatible electronics are capable of being implanted for specific medical treatments and are the first step to making this new project a reality. The current electronic systems and components used “ultrathin sheets of silicon and magnesium encapsulated in silk, a biocompatible material”.

The longevity of the electronics within the body is determined by “the thickness and crystallinity of the silk”. They can last for days, hours or just minutes. The silicon and magnesium material are naturally occurring in the human body. The amounts used in the devices are “below physiological levels”, making them safe, “biocompatible and eco-friendly”.

On September 28, 2012 DARPA published its paper on this project in Science, explaining how the implantable device serves as a programmable bactericide.

There is speculation that the military’s goal is diametrically opposite that of Big Pharma that depends on ill health to fuel its multi-billion dollar industry. Many people speculate that the pharmaceutical industry will take decisive steps to fight this new technology.

In fact, many watchdog groups point to the tactics used by Big Pharma in the fight against legalizing marijuana for pain relief and recreational use. The loss of revenue is significant and pain relief drug manufacturers have fought to retain their control over these consumer dollars. (5)

But, the public’s will has overcome the power behind the money thrown at such opposing efforts in two states, Washington and Colorado, with many more taking action to legalize medicinal use of weed.

So, will Big Pharma go up against DARPA if and when such a healing device is created and offered to the general public? Who do you think would win in such a face off?