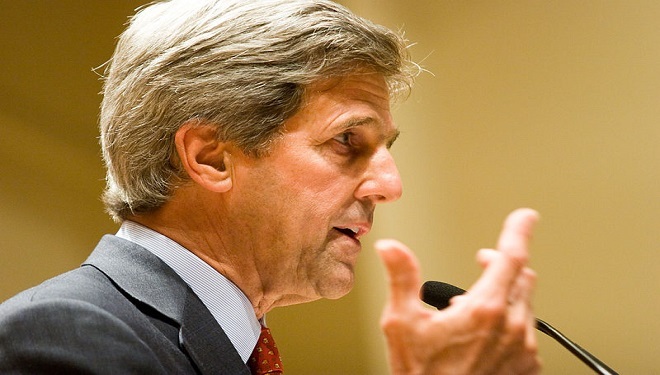 GabriellePickard view more articles
Facebook 0 Twitter 0 Pinterest 0 Google 0 LinkedIn 0
“This little thing called the Internet…. Makes it much harder to govern,” were the words of John Kerry. You would think the US Secretary of State would have had the sense to keep his thoughts about the Internet and governing to himself as, unsurprisingly, Kerry’s comments has created a whirl of controversy and disdain.

The (1) remark was made whilst Kerry spoke to State Department workers and their families at the United States Embassy in Basilia, Brazil. Digging himself a deeper hole, the Secretary of State delved further into why he is so disdainful of the Internet.

“I’m a student of history, and I love to go back and read a particularly great book like Kissinger’s book about diplomacy where you think about the eighteenth and nineteenth centuries and the balance of power and how difficult it was for countries to advance their interests and years and years of wars,” said Kerry.

Historians have long cited linking the past and the present as being the absolute basic for a good understanding of being human but where Kerry really stepped over the line was when he said:

“Well, folks… ever since the Cold War, forces have been unleashed that were tampered down for centuries by dictators, and that was complicated further by this little thing called the internet and the ability of people everywhere to communicate instantaneously and to have more information coming at them in one day than most people can process in months or a year.”

Kerry went on to say how the Internet made it much more difficult to govern and organize people and to find the common interest. He talked of how the rise of religious extremism and sectarianism complicates such issues further.

It is hardly surprising that Kerry’s comments were met with disapproval. When the news was reported on CNS News it quickly spawned over 1700 comments.

“Freedom is hard to govern,” wrote one reader.

As (2) Top Secret Writers wrote in 2012 in a report about the government’s Internet censorship efforts, the unique beauty of the Internet is the fact it gives everyday people a voice.

The power of the Internet shone brightly in the Arab Spring of 2011. It has been argued that the protests and riots that escalated in the Arab world would not have occurred without the likes of YouTube, Twitter and Vimeo.

As (3) Alijazeera writes, the ways in which old and new media are joining forces can “turn slander into reality, changing what counts as truth in today’s world”.

As the power of the Internet in giving people freedom to unlimited information and of course free speech escalate, governments across the globe are grappling with ways to monitor and censor access to the web.

As more and more people go online, Internet users are discovering new-found independence. Consequently states are looking for ways to regulate the web and shape it to its own image. Whether we realize it or not, most of the world’s web users experience some form of Internet censorship, or “filtering” as it is commonly reworded. For example, in many progressive nations, certain sites are routinely blocked, such as those which feature child pornography. Other countries have a nationalized Internet service provider (IPS), through which all web traffic flows. In countries which have one entry point for the Internet, filtering – censorship – is relatively easy.

In an article extracted from (4) The New Digital Age: Reshaping the Future of People, Nations and Business by Google boss Eric Schmidt and Director of Google Ideas Jared Cohen, the authors explain how it was when technologists began to notice governments projecting influence and regulating the Internet that some warned against a “Balkanisation of the Internet”.

A “Balkanisation of the Internet” refers to the Internet, through state filtering and restrictions, being transformed into what was once a global Internet into a “connected series of nation-state networks”.

Whether the Internet does reach “Balkanisation”, where there is a “Russian Internet”, a “Chinese Internet” and an “American Internet” will remain to be seen. For the meantime, the Internet remains a fundamental human right and an indispensable tool for accelerating development and progress.

For the deposed former leader of Libya, Muammar Gaddafi, the Internet certainly played its part in what Kerry referred to as “unleashing the forces that have been tampered down for centuries by dictators”.

This poses the question: Would Gaddafi been toppled if the dictator had reigned in a pre-digital era? With this is mind, it stands to reason the rulers and governors of the world are vexed about the powers of the Internet. The mistake Kerry made was to make his irks public.