The History of the Amazing Soviet Flying Tanks

MarkDorr view more articles
Facebook 0 Twitter 0 Pinterest 0 Google 0 LinkedIn 0
A flying tank! You might have seen old film clips of different odd aircraft before. But, my guess is you’ve never seen anything like this! And, there appears to be a mystery about it.

In the early stages of World War Two, Soviet light tanks weren’t working out very well. They were armed poorly, their tracks were too narrow to handle the terrain, and they were not produced easily.

Stalin needed more, better, readily-manufactured light tanks. The answer to this was the T-60 Light Scout Tank that could be mass-produced quickly and utilized the more powerful 20mm canon as well as a coaxial machine gun. 10,000 were ordered.

The T-60 proved a capable and useful tool in the fight. But was it up to the challenge of flying? I mean, “Light Tank” doesn’t exactly mean it’s airworthy!

It seems it’s handy to have tanks appear on a battlefield wherever and whenever you like. Parachutes are nice, but you have to fly in close proximity to the battlefield to drop them and increase the risk the airplane being shot down. The crews would parachute on their own and might be separated from the tank. Plus, there was the risk handing over a new tank to the enemy!

Gliders, on the other hand, can be released from tow planes at one point and descend to another point, helping to reduce risk to the tow plane somewhat. Crews can go with the gliders and be ready for action…if the glider and its contents survive the landing. So, some countries tried putting tanks in gliders.

However, the Soviets took a different angle. They lashed small T-27 tankettes (yes, just like it sounds, they really were small tanklings) under heavy bombers that then landed on airfields. That seemed to work, but it did require an airfield that could handle heavy bombers.

There’s a story that, during the Soviet takeover of an area now called Moldova from Romania, Soviets actually dropped light tanks from large, open cockpit Tupolev TB-3 aircraft flying only a few yards above the ground! Supposedly, with their transmissions in neutral, they just rolled to a stop. Personally, I don’t know if this is true or not.

Oleg Antonov was the chief designer of the Moscow Glider Factory from 1931-1939, creating 30 different types of gliders and producing up to 8,000 gliders per year. They needed a lot of gliders because every Soviet pilot began his training in the cockpit of a glider.

That is until 1938 when an instructor successfully defected to the West in a glider. After that, the sport of gliding was banned and the Moscow Glider Factory was shut down!

But, Antonov was needed elsewhere and by 1940 was running a new bureau in Leningrad. That’s when the demand from the Soviet Air Force for a tank-carrying glider was given to him.

The A-40 is the outcome of someone who said (in Russian), “Hey, why don’t we just put wings on tanks and have them fly themselves?”

One can only wonder what the initial reaction was when the Kryl’ja Tanka (“Tank Wings”) was proposed. They might have just told him he’s had too many glasses and sent him home.

But, whether it was due to an open-minded administrator, a creative work group, or simply Antonov had enough connections to make it happen, the flying tank began to take shape.
Large wood-and-fabric biplane wings, a twin tail, and a detachable cradle formed the flying surfaces and attachment for the T-60.

The tank had to do its part too because, after all, even a small tank is still heavy. Armament, ammunition, headlights, and most of the fuel were removed.

I have to tell you, when I first learned of this aircraft and saw the photo, I was sure this story ends up, at best, with a bruised pilot and some engineers with bruised egos. I thought the more likely end result would be much worse! But that’s not exactly how it ends.

On September 2, 1942, highly-experienced glider test pilot Sergei Nikolayevich Anokhin took his position in the tank/cockpit of the A-40. A mighty Tupolev TB-3 used all of its four engines’ combined 2,820 horsepower to tow it into the air.

With 59 feet of double wings lifting and tow rope straining, it flew.

The problem, however, was that the tow aircraft needed to maintain 86 knots (99 miles per hour) to stay aloft, and the Tupolev just couldn’t do it. The bulky, heavy A-40 was too much. They had to drop the tow line so that the Tupolev didn’t fall out of the sky.

Surprisingly, when they did this, the A-40 reportedly glided very smoothly to a good landing in a field. There, after detaching the wings and tail, the T-60 drove back to the airbase! As a pilot, that landing really boggles my mind.

Anyway, the Soviets had no aircraft that was powerful enough to do the job, so the A-40 project was abandoned.

On the one hand, this aircraft failed because it did not fulfill its goals…and it looks funny.
However, you have to be impressed that a tank was successfully attached to wings and a tail, towed into the sky, and landed! 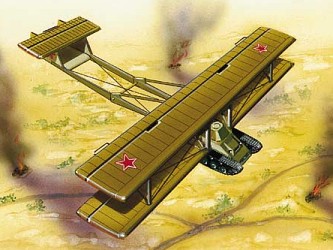 And that mystery I mentioned earlier?

Look at the vertical stabilizer. It seems to be a U.S. Army Air Corps roundel, not a Soviet star like on the wings. Am I misperceiving this?

It’s unclear why the tail looks like that in this photo. I’ve found no official mention of U.S. involvement in this project and, from what little I know of insignias, the Soviets usually had a red star on the tail.

But, maybe there’s a reader out there who has the answer.