How The DEA and CIA Manages Drug Trafficking

Dennis view more articles
Facebook 0 Twitter 0 Pinterest 0 Google 0 LinkedIn 0
The “War on Drugs” slogan has been drilled into American children since the 1970s. For nearly 45 years, America has ran a very public campaign against the production, distribution, and use of a wide variety of psychoactive drugs.

Billions of tax dollars have gone into the so-called war on drugs. However, what many people fail to realize is that the so-called War on Drugs is not exactly a full on assault on illegal narcotics. The U.S. government does not wage a war against drug producers and distributors on all fronts. It may do so on a public front, but behind closed doors the U.S. does not battle drug traffickers, it more or less “manages” drug trafficking.

In a recently published expose, former DEA Pilot Beau Abbot discusses how he was forced to fly weapons to the Nicaraguan Contras. Though the video interview was conducted in the 1990s, it appears to have been recently published this past February by Steve Webb.

During the interview, Abbot discusses his role as a narcotics pilot importing drugs for the CIA. He goes on to state how he got his start as an undercover agent for the DEA, which includes his training as a pilot. During his stint as a DEA operative in 1978, Abbot states that he had learned that the CIA was in Bolivia to make sure that the DEA only caught the small time drug producers/distributors and left the major producers alone. (1)

However, the management of the drug trade did not end in the 1970s.

“The Senate Subcommittee concluded that the drug cartels posed a continuing threat to national security at home and abroad and that the United States has too often in the past allowed other foreign policy objectives to interfere with the war on drugs.” (2)

This conclusion was a result of an investigation that found that the DEA and the CIA often turned a blind eye to the drug trafficking out of South America and into the U.S. More often than not, these agencies did more than turn a blind eye, they often facilitated the trafficking by the Contras.

Fast forward nearly 30 years and it seems that the CIA has not changed its ways. In 2012, Guillermo Terrazas Villanueva, Chihuahua state spokesman, told Al Jazeera that the CIA manages the Mexican drug trade not in an effort to end the crime, but rather for the agency’s own benefit.

In the interview Villanueva equates the CIA to a bunch of crooked exterminators. “It’s like pest control companies, they only control. If you finish off the pests, you are out of a job. If they finish the drug business, they finish their jobs.” (3)

These are accusations that were echoed by a number of Mexican officials. 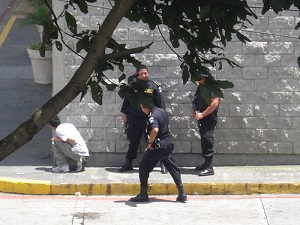 Waging a War on Drugs or Striking Deals?

Most recently this past January, it was reported that the DEA struck a deal with Joaquin “El Chapo” Guzman, the leader of the Sinaloa drug cartel. It seems that an investigation conducted by El Universal uncovered that the U.S. government had a deal with the Mexican drug cartel from 2000 through 2012.

According to the findings, the terms of the deal was that Guzman’s cartel would be allowed to smuggle billions of dollars of cocaine and heroine as long as the cartel could provide information on their rivals. However, this came as no surprise to many in the drug trade or law enforcement since it has been widely rumored that Guzman has had DEA help for some time.

In the media, it may seem that the American government is waging a war on drugs to protect its citizens. However, the harsh reality is that there is no war on drugs. There is only the management of drugs and drug trafficking.

Even more unfortunate, is that it is only to benefit the CIA and at the expense of the American people.