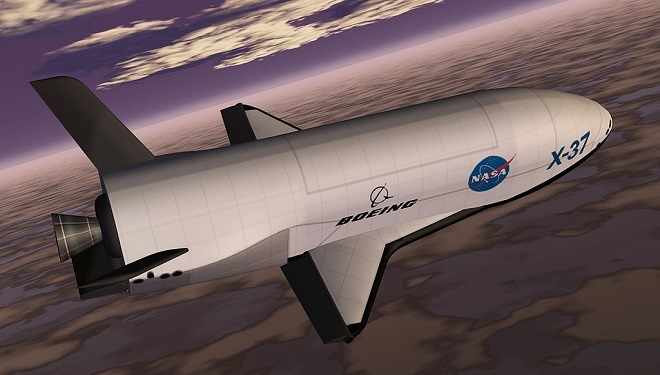 GabriellePickard view more articles
Facebook 0 Twitter 0 Pinterest 0 Google 0 LinkedIn 0
In 2010, the US Air Force launched a top secret space plane the X-37B (1) from a base in Florida. In 2012, the Air Force launched a second flight of the mysterious spacecraft.

Other than its size – 29 feet long and a wingspan of 15 feet – and appearance – looks uncannily like a NASA space shuttle – and the fact it is owned by the Air Force, there is little known about the X-37B.

And, when little is known about a mysterious object spending a prolonged period in space, speculation and theories begin to fly.

As the military continues to keep the X-37B’s mission classified, take a look at some of the leading theories about the Supersonic X-37B’s operation in space.

One leading theory concerning the work of X-37B is that it has been taking advanced sensors into space for testing. These sensors could operate from the X-35B as a large and secure platform with an independent power source.

According to Dod Buzz (2), one set of sensors, which the US so “desperately needs”, would be related to space situational awareness.

It has been suggested that the X-37B might be used to manipulate a satellite. As the spacecraft can, apparently, be maneuvered while in space, low orbit deployment of satellites might be possible.

The suggestion, however, that the Air Force Spy Plane mission is used to deploy space weapons or to interfere with enemy satellites has been dismissed. Colin Clark of Dod Buzz rejects such claims due to the fact the US already has the ability to shoot down satellites, as well as being able to dazzle enemy satellites.

Setting Up Technology for Surveillance

Brian Weeden, a former Air Force officer, also believes the mission of X-37B is likely to be something less shocking than the popular theory that it’s:

“Testing the ability to drop bombs in orbit or covertly going up and disabling satellites.”

Highlighting the fact that the military has relied on satellite surveillance for years, Weeden states that it is much more probable the X-37B is setting up technology for surveillance.

With an ability to be reused and travel unmanned, the spacecraft would enable a quick turnaround on experiments. Talking to (3) ABC News, Weeden said this type of aircraft might act as a “fast-track space” for the military to try out new equipment in orbit prior to being sent via satellite.

“If new equipment breaks on a satellite in orbit, it can be difficult to fix. However, if it breaks in on a returnable spacecraft, engineers can make changes before it returns to orbit,” said Weeden. 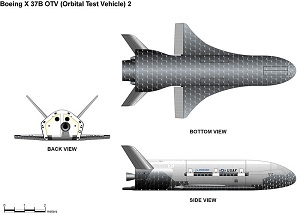 In 2012, Spaceflight (4) magazine claimed the X-37B was a spy plane spying on the Chinese space station. Spaceflight magazine noted that the plane was close to that of the Tiangong, China’s space station which acts as a manned laboratory and an experimental test-bed to demonstrate docking capabilities and orbital rendezvous.

Weeden, however, also disputes this claim arguing the China spying theory ignores a critical component of the spacecraft’s orbit, known as right ascension.

By crossing the orbit of the Chinese space station at only two different points, Weeden claims the X-37B couldn’t keep a constant watch on Tiangong.

“Even though there may be a brief chance at some point for the X-37B to collect intelligence [on the Chinese space station], that certainly is not the main mission, or even something all that feasible,” said Weeden. 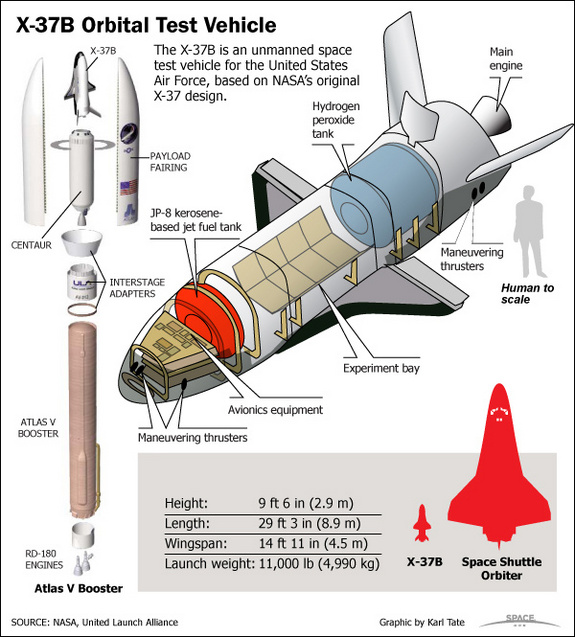 Another theory surrounding the Air Force’s mysterious spacecraft is that it is a space bomber. As Popular Mechanics (5) writes, at one point the Pentagon was funding the development of a reusable hypersonic vehicle which was allegedly able to deliver munitions anywhere in the world within two hours.

However, that concept was suborbital and the X-37B, an orbital plane, would require a huge amount of thrust to fly over targets which would eat up its limited fuel supply.

“If I can’t get my alleged bomber to the right location to release its bomb, what good is that?” asked Mark Lewis, a former Air Force chief scientist.

Without any solid explanation, speculation about what the X-37B’s mission really is continue to circulate. Blanket secrecy never fails to invite speculation about a venture’s true purposes, particularly when it involves space missions.

The most logical explanation is that the X-37B is an experiment for testing reusable-space-vehicle technologies. But if this is the case then why the secrecy?