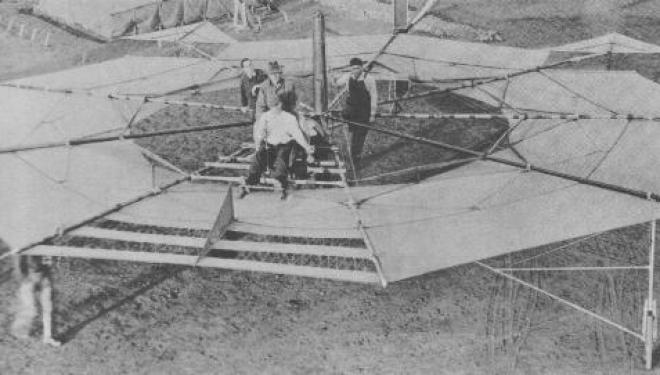 Dennis view more articles
Facebook 0 Twitter 0 Pinterest 0 Google 0 LinkedIn 0
When we think of disc-shaped aircraft, immediately the classic image of the flying saucer comes to mind. An image that was popularized in the 1940s and 50s during the so-called golden years of ufology.

Shortly after the Wright Brothers’ historic first flight in 1903, people began experimenting with all sorts of styles and configurations. One of those configurations was the 1911 Cycloplane, which became known as the Umbrella Plane.

The Umbrella Plane was created out of scientific curiosity and business necessity. When the Wright Brothers proved that man could fly, a number of people jumped into the fledgling world of aviation. All sorts of aircraft designs began to emerge to determine which design would be the most efficient flyer.

Additionally, the Wright Brothers held a number of patents on various key designs implemented in their biplane design, such as wing-warping and a vertical rear rudder for stability and control. (1) Moreover, the Wrights, along with their patent lawyer Henry Toulmin, were known to protect those patents with veracity through a number of lawsuits.

In an effort to create a more efficient aircraft and to avoid paying any sort of licensing fees to the Wrights, businessmen Harold F. McCormick and John D. Rockefeller decided to back inventor William S. Romme. (2)

In 1910, Romme had showcased a model aircraft that appeared to have not capitalized on the Wrights’ designs. He dubbed it the monoplane. It was a round, disc-shaped aircraft with a spoked-wheel design.

When held vertically the monoplane looked very similar to an umbrella. The innovative design won Romme a design contest in the areas of “length of flight, stability and originality.” (3) With funding from McCormick and Rockefeller, Romme set out to turn his model into a full fledged aircraft.

A few months after the model’s debut, Romme had a full sized prototype. Unfortunately, the design was quite susceptible to the wind. It was destroyed before it even left the ground.

The following year, in the spring of 1911, Romme had modified his design and was once again ready to test the monoplane by August of that same year. Just as before, the disc-shaped plane was toppled by the wind before it ever left the ground. Not phased, the group continued their work, moving the workshop from San Antonio to Chicago where better testing facilities were available.

A Place in History

On August 29, 1911, the Umbrella Plane finally left the ground at Cicero Flying field near Chicago. It was not a perfect flight, but the monoplane flew to a height of 15 feet.

Most of the innovations that led to the successful test flight can be attributed to the addition of a young engineer by the name of Chance Vought.

Seeing that there was room for improvement, experimentation with the disc design would continue until 1913. However, the design concept appears to have faded away into history. The Umbrella plane was eventually abandoned.

The idea of a disc-shaped aircraft has been toyed around with for the last century or more, since the dawn of human flight. Whether it will ever become a mainstream design concept remains to be seen. Nevertheless, the Umbrella Plane has earned its place in aviation history.