7 Of The Strangest Non-Lethal Technologies Explored by DoD

Allen Taylor view more articles
Facebook 0 Twitter 0 Pinterest 0 Google 0 LinkedIn 0
Technological superiority is so important to the U.S. Department of Defense (DoD) that it doesn’t just have one agency conducting research into new weapons technology. The U.S. Army, Navy, and Air Force, in fact, each has its own research laboratory. (1) But some of the weapons systems the military has considered over the years might be a little suspect.

You would think that if such primary importance is placed on the development of weapons technology, then the DoD might consider lethal weapons of supreme importance. Not always.

There are good reasons military strategists would consider non-lethal weapons. For instance, in recent years, the number of low-intensity conflicts and operations other than war conducted by U.S. military personnel lend themselves to the necessity of non-traditional weapons systems. (2)

These exercises often call on military personnel to disable combatants, non-combatants, and weapons systems in order to mitigate collateral damage. Disabling or disrupting vehicles, machinery, communications systems, and other equipment may also be necessary, depending on the mission. Some missions might call on military leaders to influence or manipulate enemy or civilian behaviors and decisions or to erect barriers or obstacles in the way of enemy and civilian personnel and transportation assets.

In short, what all of this means is non-lethal technologies allow the U.S. military to win wars and engage the enemy in ways that won’t destroy civilian populations and infrastructure while fighting a global war on terror or disarming enemy states in defending U.S. national interests.

Still, some of the non-lethal weapons the Department of Defense has considered will have you shaking your head in disbelief.


What Is a ‘Non-Lethal’ Weapon, Exactly?

If you have the doe-eyed idea that a non-lethal weapon is one that won’t hurt you, think again. Some of these weapons can inflict pain that will make you wish you were dead — which is the point. They are considered non-lethal because they won’t kill you. (3) The Department of Defense even has an ongoing program designed specifically for the study, manufacturing, and testing of such weapons. (4) That’s how important they are to modern warfare.

Non-lethal weapons are often used in special operations and counterproliferation efforts, but they come in handy for other military operations, as well. Some of the more established uses include:

–> Climate control
–> Denying the use of enemy, friendly, or neutral facilities
–> Disruption of financial operations
–> Behavior modification
–> Psychological operations
–> Subversive mimicry, for those times when it might be prudent to make fun of the enemy

Some of these uses are practical in modern warfare. For instance, in fighting the war on terror, it might be necessary to track the movement of money that funds terrorist activity. The use of non-lethal weapons to disrupt financial transactions can then save thousands, or millions, of lives.

Nevertheless, a skeptical mind can’t help questioning the necessity (and wisdom) of some non-lethal weapons systems. Maybe that’s why some of the more fringe weaponry haven’t seen the light of day. Keep in mind, however, that the DoD has some of these weapons systems currently in test mode while others might be planned for the future. 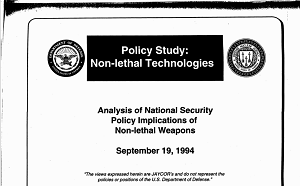 Non-Lethal Weapons You Should Be Afraid Of

A policy study on non-lethal weapons conducted by JAYCOR and published in 1994 concluded, “Some of the most difficult questions concerning compliance with the law of armed conflict and general ethical considerations may arise not from the use of NLWs but by election not to use them.” (2)

For that reason alone, Americans should be concerned about the DoD’s plans and implementations of certain non-lethal weapons technologies, including these:

Active Denial System adds new meaning to the phrase “fire in the belly”. This system is affectionately referred to by some as “The Pain Ray”. (5) That’s because it will zap you with radio wave energy that causes a burning sensation in your skin.

Think of it as a giant microwave oven that comes to you. (6) It’s been fired at journalists (7) and U.S. military personnel (6), but not at any U.S. enemy personnel, despite the fact that it has been offered to military leaders in Iraq.

It did make a trip to Afghanistan but was returned unused. (8) The DoD has spent $40 million (9) and more than a decade thinking this one up. It was developed by defense contractor Raytheon. (10)

If you’re wondering how it might get used, picture this: U.S. military forces are called into a foreign urban environment to ferret out terrorists and separate them from the indigenous population. Because they pose a threat to friendly forces and civilians, but look like the civilians they are surrounded by, the ray gun could be used to inflict pain on a group of targets in the same vicinity without killing any of them, which could give U.S. special forces personnel enough lag time to move in and engage with known terrorists without killing surrounding civilians in the process.

That’s a long way of saying “blinding laser”, which is precisely what this weapon is all about. Developed by the U.S. Air Force (11), you’d think someone at the DoD might have had second thoughts when the idea was first mentioned, since blinding laser weapons have been banned by the UN since 1995. (12) But that ban applies only to weapons intended to permanently blind combatants. (13)

USAF commanders reason that since PHaSR’s effects are temporary, resulting in merely dazzling the target for a few seconds, it doesn’t fall into the parameters of the ban. Technically, you could say they are correct.

If you’re looking for a practical use, try this: You’re a guard at a military checkpoint and a civilian vehicle crashes through. You’re not sure if it was an accident or purposeful. Either way there could be explosives on board that detonate if hit by small arms fire, so you point your PHaSR at the vehicle and temporarily blind the driver, who then swerves and grinds to a halt. Or something like that.

Back when homosexual love was as stigmatized as divorcing your wife for overcooking the pasta (actually, the year was 1994) (14), the Air Force contemplated using pheromones disguised as bombshells to turn enemy soldiers into flaming love puppets whose objects of affection would be each other.

Dubbed “the gay bomb”, the idea was to use chemical weapons to destroy enemy morale. The practical application of this weapon should be obvious. While enemy troops were preoccupied with making love instead of war, American macho men could have their way with them – in a not-so-Biblical sense.

These chemical weapons, mostly theoretical, potentially existed in a variety of forms. One such weapon, termed “halitosis bomb”, would cause the enemy to have bad breath so that they couldn’t so easily blend in with civilian populations. (14)

Another one was called the “Who? Me?” bomb (15), because it would simulate flatulence within enemy ranks. And when the undisciplined soldiers of the enemy were busy trying to nail down the culprit, American forces could then swoop down upon them and take them by surprise, sort of like a swarm of angry bees.

Speaking of which, the “sting me/attack me” chemical bomb would spray bee pheromones on the enemy then release swarms of wasps into enemy bunkers.

After $7.5 million in weapons development research, the DoD abandoned these stinky ideas. Reportedly, the “Who? Me?” bomb was nixed because it was thought that cultures where fecal matter is smelled on a regular basis wouldn’t be affected by that weapon. (15)

Speaking of strange odors, here’s a weapon that will squirt a cone-shaped pocket of supersonic pressurized air accompanied by a lousy odor that causes extreme nausea. (16) You could call it a fart gun. While the enemy is lying on their backs trying to recover, they won’t be able to because they’ll be puking their guts out.

Later developments of the weapon exist as a huge cannon. A variation on the malodorant theme is the U.S. Army’s XM1063, a weapon so secret they can’t even give it a name. (17) It’s a Howitzer round that scatters into a bunch of little pieces and sprays a stench over an area in order to disperse a crowd.

I guess if you’re involved in a war with people who aren’t evil enough to deserve to die, these weapons could really get their goat.

If you think shooting slimy goo at people and watching them try to run is good fun, then you’re probably in the U.S. Army. Troops actually used the Sticky Foam Gun in Somalia in 1995 (18), but there were some sticky issues that couldn’t be worked out. So, military leaders decided to shift their attention to sticking it to vehicles.

What’s a weapons list without lasers, plasma, or portal denial systems? This bad boy sets up an electric barrier that will electrify and shock its victim upon contact. (19) It’s like an electric fence you can’t see, only much more potent.

Victims suffer severe burns that will make them wish they were dead. When military leaders are making war plans and they don’t want the enemy sneaking in to get a look at the map, they could erect one of these force fields and listen as if waiting for the fly to get zapped.