The Authenticity of the FBI Round Robin UFO Document 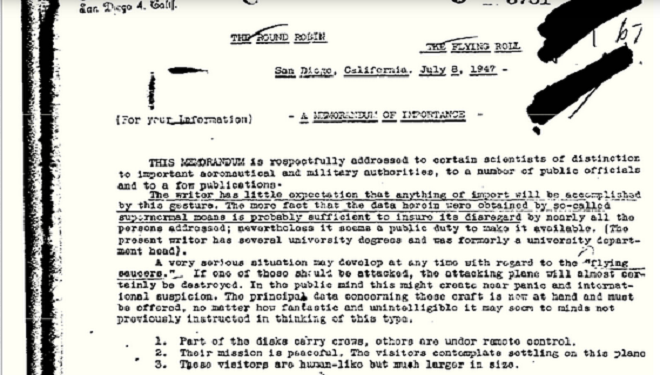 Jenny Lewis view more articles
Facebook 0 Twitter 0 Pinterest 0 Google 0 LinkedIn 0
Since the FBI published its UFO documents on its vault, people have been trawling through them looking for clues as to the reality of extra-terrestrial visitors to our planet.

One document which has repeatedly surfaced over the years is page 22, The Round Robin memo.

This document can be found on the FBI vault under UFO, open the first document (1 of 16) and in the page numbers at the bottom type in 22 (1). Upon reading you’ll discover that this is a memo sent from someone who used to work as a university department head and holds various university degrees.

The memo goes on to explain what the flying saucers are, who is controlling them and what they want. The detail involved makes an impressive argument but could also be the author’s undoing.

The fact that this memo can be found on the FBI vault means that it’s not a modern day hoax, but equally doesn’t rule out the possibility of it being a hoax from 1947.

The Roswell incident was the end of a wave of UFO sightings across the world, including Europe, the UK and South America with a number of “flying saucers” having been spotted (2) across America.

This would explain why someone might know about their existence before Roswell.

The memo states San Diego as its origin. A number of the reported sightings happened in California, one of which was in San Diego on July 3, 1947 by two motor machinists (3).

But, this doesn’t mean that an academic couldn’t have witnessed something similar elsewhere.

Is the Document Truthful?

But how could the author have gotten hold of this information? There are no details in the memo about this, although the person acknowledges that he won’t be believed. The author claims to know how the disks are worked and the appearance and mission of the beings inside. And yet, the author claims that radio contact may not work. How can one know the intricate workings of a flying disk without knowing how to contact the beings in control of the vessel?

The problem with this, and the reason why these documents continue to spark controversy and theories, is that every question raised can be met with explanations that both confirm and contradict whether the flying disks were extra-terrestrial. For example, if a person were to come into contact with the disks and discover how they work, he may not have gotten the contact details of the beings controlling them.

The use of the term “flying roll” on the top right could be a Biblical reference to the flying roll (a scroll carrying declarations from God) which Zechariah sees in a vision and is written in the Book of Zechariah (4). Some UFO enthusiasts believe that this flying scroll was a UFO sighting.

The use of the terms “Locas and Talas” in item eight of the memo also hints at religious undertones as these are considered doors to other worlds in Hinduism.

While it is plausible that this document is genuine, the lack of name and details of the author’s academic career removes much of the credibility. The scribbled note of “no action” on the left side suggests that the FBI believed it unimportant.

It is highly likely that after a spate of strange sightings across America, someone sent a memo to the FBI with fabricated information, in the same way that the FBI most likely receives letters of hoax UFO sightings and experiences today.

Whether the author believed their own story or not will probably never be proved either way. Nevertheless, however you want to look at it, this memo is an important, historical document that gives some insight into the excitement about flying saucers in 1947.