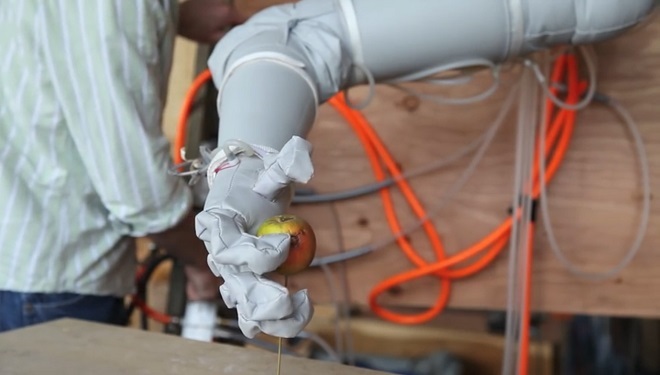 Allen Taylor view more articles
Facebook 0 Twitter 0 Pinterest 0 Google 0 LinkedIn 0
In Big Hero 6, a young robotics genius must save the world after his microbot invention has been stolen and mass produced by an evil villain.

While this Disney film has a powerful and lovable protagonist with awesome animation features, don’t write off the effectiveness of inflatable robotics as mere fantasy. Thanks to DARPA, they’ve entered the real world. (1)

The benefit to robots made of soft materials such as fabrics, balloons, and light plastics is that they are lighter weight and cost less to make than robots made of metal.


The State of Robotics at Carnegie Mellon

If all of that isn’t enough, there is plenty going on at CMU’s Soft Mechanic Lab. (7)

Carnegie Mellon isn’t the only place where soft robotics research is taking place. In 2011, Otherlab, with Meka Robotics, introduced a “pneubot” named Ant-Roach and developed an inflatable robot arm and hand. (8) Ant-Roach gets its name from its shape, which creators say is like a cross between an anteater and a cockroach. In essence, it’s a huge walking inflatable insect.

While Otherlab is a private research and development company operating as a for-profit entity, the soft robotics limb that inspired Disney’s Big Hero 6 was created by Siddharth Sanan, a student at CMU working on his doctoral thesis. (9)

Earlier in the year, researchers at the Massachusetts Institute of Technology created a soft robotic fish that moves like a real fish. (10)

All of this might have you wondering, what are the practical applications of such innovations. If you really want to know, with a 3-D printer you could print your own sex toys. (11)

Create Your Own Prosthetics or Robot-Servant

Actually, there are quite a few practical applications where inflatable robots can be useful. When 3-D printing becomes as common as the laserjet, all you’ll need is a soft robotics toolkit (12) and you’ll be able to make your own household items, from artificial limbs to your brand of inflatable house pets.

There is still some ways to go in certain areas of soft robotics. For instance, researchers still are unsure about how to achieve sensing, actuation, and control in soft-bodied robots. (13)

There are also still questions to be answered about materials, tools, and methods of fabrication. Nevertheless, inflatable robotics are as real today as Disney animation, and it’s a matter of time before Baymax is walking your neighborhood.