How to Make Light in an Emergency Situation or Blackout

If you travel the streets of Tirana, Albania today, you’ll see tall buildings, lights, and cell phones everywhere. But, it was a different story in the mid-90s.

From my apartment just off Skanderbeg Square, if you’d walked with me, we would rarely pass anyone with a mobile phone or even see a pay phone. Instead, you could pass the occasional residence or store with a telephone set on a stool. Want to make a call? Pay the phone’s owner.

We would head toward my usual, crumbling-walled café where candles in carved alabaster holders lit the room each time the city’s power went out.

Afterward, we would pick our way through the sometimes-lit street to my building. Inside, pitch black. No lights in the hallways or stairways. And there wasn’t always a flashlight in your pocket.

The solution? Push the little knob on my wristwatch that lit up the watch face.

If you’ve never done that, you might think that the glow of a little wristwatch wouldn’t make much light. But, in a completely dark hallway, it works great!

Light is an incredibly powerful survival tool. Most of us need it to be able to do our work and keep an eye on our area. And equally important, it provides a feeling of comfort and security.

It’s always best to have reliable equipment like a lamp or flashlight. But, what if you don’t?

Get creative. Rig up something. Urban environments are especially full of options. The possibilities for having light are nearly endless!

A cell phone is one of the best quick answers for light! Probably, you’re carrying the phone most of the time already. The light from the screen’s good, it’s directional, and it makes no flames.

In case you haven’t noticed already, even without a special “flashlight” app, the glow from your mobile phone will make more than enough light for you to navigate in the dark. Just activate the screen and use the light!

Fire Up Your Art with Quick Crayon Candles

You can easily use a crayon as a candle. It’s pretty good at keeping a flame in light/moderate breezes, too!

Like a candle, I drip some wax to hold it upright.

Some folks on the Internet will tell you these last 30 minutes, but the best I’ve had is 10.

Put it on a heat-resistant surface away from flammables and avoid the hassle of fighting a fire! 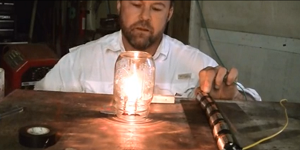 Yep. You can do-it-yourself.

You’ll have light for brief periods if you have mechanical pencil lead, a little electrical wiring, batteries, a glass jar and a dish or other item to use as a heat shield. Duck tape, a big binder clip or part of a toilet paper roll, and some alligator clamps can make it easier…possibly safer. (As usual, duck tape comes in handy!)

But, it won’t last long before burning up in oxygen. To extend its life a little, we’ll cover it with something like a mayonnaise jar. That’ll be your bulb.

Put a dish or other flame/heat shield on a table.

Clamp the wires upright inside the binder clip as a holder. If no binder clip, cut part of a toilet paper roll use it as a base to which you tape your wires. Or, if the wires are strong enough to hold themselves, just tape them so they’re suspended over the dish.

Twist the wire on or use the alligators to attach one piece of wire to each end of the lead.

Line up the batteries and tape them in tandem. Say 6 or 8 “D” cells or a 9-volt battery. I’ve heard you can do all this by stripping the materials from your car, if you need to, and using the car battery. But, I’ve not tried it. Tape one wire to one end of the batteries.

Touch the other wire to the other end…and there will be light!

–> Don’t try this with higher power like your home electrical socket! Dangerous.

–> The lead will smoke for a moment before glowing.

At best, you’ll get about one minute of glow light per lead before it burns up. You can choose to extend the life of your makeshift bulb by removing some oxygen. For instance, put a small candle in the jar with it that will burn and die in a moment, taking away more oxygen and extending the filament’s life.

Disconnect the batteries and replace the lead for additional lighting time.

The wick’s not hard to make. Thick cotton string is easiest. Try pulling apart a dry string from a strand in a mop. But, if you only have thinner cotton string, just braid it together. I’ve done it lots of times and it doesn’t take long. Sometimes it helps to rub the oil/fat/grease on the wick.

You need some sort of heavy fat, something to hold it in, and a wick.

This needs a bigger wick than a “regular” candle! Try a whole strand of the mop, twist together a cotton shirt into a cord, etc. Push the wick in with a stick or bore a hole most of the way down. If you just can’t make wicks that are big enough to stay lit, try several wicks.

You can literally make your bacon burner from bacon! Tear the meat off raw bacon and stick the fat in a small can or jar around a wick.

You’ll need adequate air if you use indoors, and open flames are always a fire hazard. 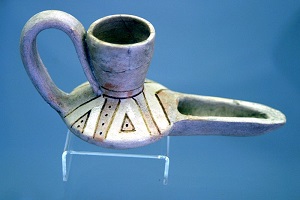 Another oldie-but-goodie is the oil lamp. Making light with oil has worked in Native American fish oil lamps, Tibetan butter lamps, 18th century whale oil lamps, and many others over the centuries.

You just need some kind of container with something like a cooking oil and a wick. A small bowl with olive oil, a can of fish with the leftover oil, etc.

It’s an open container of oil with a flame above it, so watch it.

What About Glowing Mountain Dew?

There’s a popular video or two on the Internet detailing how you can turn a bottle of Mountain Dew and ingredients like baking soda, hydrogen peroxide…even starbursts…into a light.

Don’t plan on it helping you in the dark. Like quite a few inaccurate or downright wrong “techniques” that you’ll find on the Internet, it won’t provide what you need.

Atomic Scientists Think 2016 Might Be The Year of Doomsday   2

Is Federal Government Targeting Doomsday Preppers for Our Safety or Theirs?   3