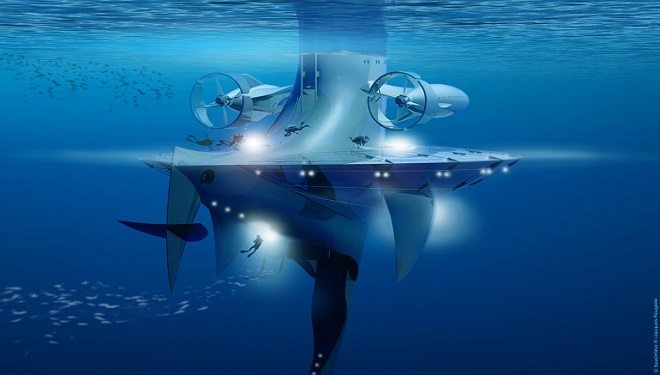 SallyPainter view more articles
Facebook 0 Twitter 0 Pinterest 0 Google 0 LinkedIn 0
Being a sea dweller isn’t a new concept, but the SeaOrbiter is a completely new concept that may one day be available to seasteaders. Many scientists believe Jacques Rougerie’s latest creation is the key to future underwater communities.

Not since the Navy’s 1960s underwater research facility SEALAB has the dream for creating entire undersea communities been within the grasp of reality. The excitement over SeaOrbiter has rippled across the world. (1)

This latest brainchild of 30-year veteran marine and subsea architect Jacques Rougerie stands to revolutionize how universities teach marine sciences, astronauts train and how the average person understands and learns about the importance of the ocean to all life on earth.

With a multi-media department on board, those following life and discoveries on the SeaOrbiter will have access to new discoveries and often real time video footage. The vessel is described as an “autonomous drifting underwater scientific platform of 2600 tons displacement…”

A 1:15 scale model has been tested in a tank located in Marintek, Norway. The SeaOrbiter is called a free-floating vertical vessel and sports propulsion, ballast and keel systems to allow easy maneuvering around the world’s oceans with stopovers at various major seaports. In fact, the plan is to build a fleet of SeaOrbiters that will “increase the range of SeaOrbiter and be able to collect data simultaneously in all the oceans…” This would allow a vessel in every ocean forming a network of “Sentinels”.

There has never been anything like the SeaOrbiter of the proposed fleet. As an underwater explorer, Jacques Rougerie has not only tested his creations, but has lived in several subsea habitats. He holds the world record for living under sea for 71 days off the coast of Florida.

The SeaOrbiter isn’t Rougerie’s first creation. He’s been successful creating underwater vessels and shelters since his first one in 1977.

–> Galathée: Immersed in 1977, this semi-mobile habitat laboratory moored at 30 – 195 feet deep.
–> Aquabulle: Launched 1978, this underwater shelter was suspended mid-water up to 195 feet and was used as a mini-scientific observatory, accommodating 3 people up to several hours. Several were manufactured and many are still in use by laboratories.
–> Aquascope: Launched in 1979, this semi-submersible trimaran was an underwater leisure observation that operated on a variable buoyancy principle. With 25 built, many are still in use today and offer large panoramic portholes.
–> Hippocampe: Launched in 1981 as a scientific underwater habitat suspended mid-water, the Hippocampe accommodates 2 people for “saturation dives” up to 39 feet deep for 7-15 days. Used as a “subsea logistics base for offshore industry”.
–> Aquaspace: Launched in 1982, this “aluminum trimaran transparent central hull” provides space enough for 12-18 people in observation of underwater fauna and flora below waterline. Still in use in Netherland Antilles, effective platform for research and filing and pioneered new concept in marine biology studies from surface.

The SeaOrbiter represents a combination of these “vessels and mobile underwater homes” Rougerie designed and built. This “vertically aligned vessel” is designed to be a “platform for science, education and the dissemination of information”.

The SeaOrbiter is a unique undertaking and will be an “international oceanic station”. As a self-sufficient slow-drift vessel, the crew of 18-22 will conduct scientific research as well as educational projects designed to benefit humanity.

–> 88 feet above the waterline

–> 4 accommodation levels above the waterline

–> 6 accommodation levels below the waterline 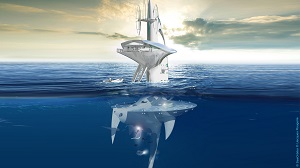 Aside from wave power, the SeaOrbiter uses a vertical wind turbine and a 350 M2 solar skin for producing the needed electricity for operation.

Some of the features include:

One of the most attractive features of the SeaOrbiter is the pressurized module where aquanauts can live and work. Since the module is pressurized, the aquanauts can move freely between the module and the sea without the typical need for decompression time periods between surface and deep sea research missions. This feature is time-saving for researchers and can also be used to help train astronauts for living in space. The area is also used for simulating space experiments. As a safety precaution, the SeaOrbiter is equipped with portable inflatable chambers as well a “fixed hyperbaric chamber”.

These are just a few of the many features built into the vessel. The possible applications for the SeaOrbiter seems to be unlimited and could reasonably support seasteaders or other sea dwellers in the future. In the meantime, Rougerie’s latest design can only be topped by his newest project – a mobile floating hotel and university. (4)