Are Bigfoot Sightings in Decline?

Octavia Drughi view more articles
Facebook 0 Twitter 0 Pinterest 0 Google 0 LinkedIn 0
It is one of the world’s greatest mysteries… or hoaxes. A cryptid monster that continues to elude researchers.

Possibly a big hairy bear, or a Halloween costume, Bigfoot’s reputation precedes it, stirring up the curiosity of hunters, adventurers, and scientists who’ve all embarked on a long journey to prove it’s more than just a legend.

People are naturally drawn to enigmas and secrets and they often forget there’s a thin line between reality and fiction.

Obsessed fans will spend weeks in a row roaming the forests hoping to get a glimpse of Bigfoot. Every once in a while, a witness steps out with an incredible story. DNA samples, footprints, pictures, and videos keep on piling up.

It’s interesting to see how, despite the lack of concrete evidence, Bigfoot has become a worldwide phenomenon, a modern myth.

Science is open to all possibilities and does not deny something just because it sounds absurd. There are people who claim to have seen it, heard it, or smelled it. There are videos and photographs.

Even though the evidence doesn’t sound very convincing, according to science there is a possibility, however small, that it does exist.

Bryan Skyes from Oxford University explains there’s already proof of cohabitation between Homo sapiens and the Neanderthal man, which could explain the Bigfoot mystery.

Over the last decades, numerous organizations have gone to great lengths to scientifically prove its existence. In 2012, a group of researchers from Oxford University and the Lausanne Zoology Museum in Switzerland asked museums, scientists, and Bigfoot hunters to send hair samples they believe came from the creature.

They received a total of 57 samples and were left with 30 they could use. The result came as a big disappointment for fans. Using GenBank (a DNA sequence database), samples revealed the DNA of various known species like bears and canine with no sign of a mysterious primate (1). 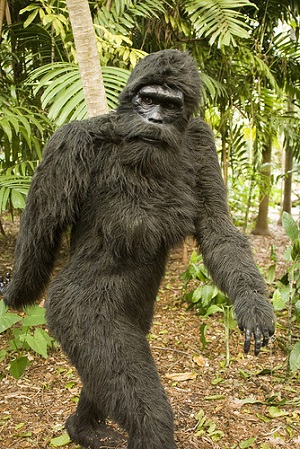 There have been 3,313 reported sightings over the course of 92 years (2). Some reports include pregnant females and even infants.

There are too many witnesses describing the same thing: a 7 to 8 foot tall hairy ape man that smells bad and makes a distinctive sound. Some stories are quite credible.

According to recorded accounts, there may be somewhere between 2,000 and 6,000 individuals across North America reporting Bigfoot sightings (3).

There are a total of 900 footprints attributed to the creature, each about 15.6 inches long. Genuine hair samples have yet to emerge. When it comes to footage, all we have are hazy videos and blurry photos. What we lack is not quantity but quality.

In 1955, William Roe was on a hunting trip in the Mica Mountain, British Columbia, when he claims he encountered a 6-foot female Sasquatch. His sketch of the creature became one of the fundamental documents in the search for Bigfoot (4).

In 1967, Roger Patterson and Bob Gimlin shot a 18-second video of a Bigfoot crossing a creek. Some believe it is one of the strongest pieces of evidence of the cryptid, while others struggle to find faults in the footage. It was never proven as a hoax, but it was never proven genuine either (5).

Earliest sightings precede colonial invasions. Native Americans knew there was a hairy creature roaming the wilderness, but the first recorded encounter dates from 1811 in Canada (6).

Since then, Bigfoot has been seen all over North America, from Alaska to Florida, where it goes by a different name: the Skunk Ape.

Sightings are rare in densely populated areas and are more common in places with scarce populations. The Pacific Northwest leads the chart, while the most “active” states are Washington, California, Oregon, and Ohio (7).

It certainly looks like as though the number of Bigfoot sightings are dropping. To sum up the year of 2014 in Bigfoot sightings, Citylab put together a list, courtesy of Bigfoot Field Researchers Organization (BFRO), which has been investigating and recording encounters since 1921.

According to Citylab, sightings have been in decline after reaching their peak between 2000 and 2009. Pennsylvania and Washington lead the chart, each with 4 sightings, followed by Virginia, Illinois, Ohio, Texas, Minnesota, Kentucky, and Georgia (8). At the same time, reports are entered on the BFRO website on a regular basis (9). Why the contradiction?

There’s a matter of accuracy when it comes to BFRO. Exact coordinates are unknown. Registered members can only enter the nearest city, but the sighting could have occurred miles away into the wilderness. Of course, this doesn’t prove anything. Since the existence of Bigfoot has yet to be demonstrated, a rise or fall in sightings only goes to show people’s interest in the phenomenon.

Why the sudden rise in sightings between 2000 and 2009? Some believe technological advances are to blame such as GPS tracking systems, better cameras, and of course Photoshop. But technology continues to grow, so why the recent drop? Could it be that people wanted to believe and now they are simply skeptical? (10)

Wanting to believe does not mean it actually exists. Yet we can’t help but wonder what might be lurking in those woods, in hiding and struggling to survive, constantly teasing hunters and researchers. What is certain is that the search for Bigfoot continues.