The Dancing Plague of the Middle Ages 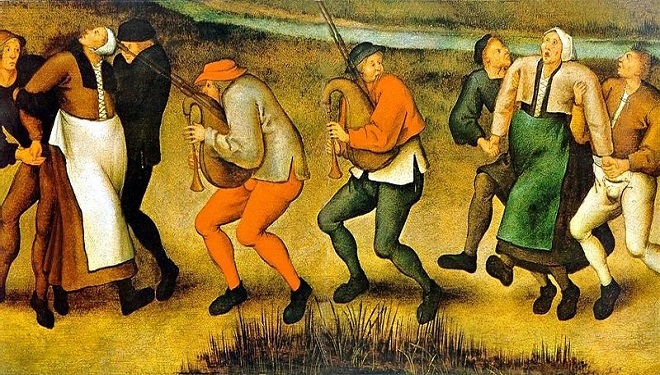 SallyPainter view more articles
Facebook 0 Twitter 0 Pinterest 0 Google 0 LinkedIn 0
The Dancing Plague of the Middle Ages was a mysterious disease that besieged most of Europe, Prussia (German Empire) and the Netherlands for several centuries.

There were recorded cases of the disease moving through parts of America as well.

It sprang up almost two decades after the Black Plague (1) that took between 50-70 million in Europe and possibly up to 220 million worldwide (2).

Some records stated that unless the victims danced, they died. The phenomena rampaged through the 13th and 14th centuries, with no real appearance of weakening until the 18th century.

The symptoms of the Dancing Plaque included delirium, an uncontrollable urge to dance, wild leaping, singing and foaming at the mouth.

The contagion moved so swiftly that onlookers would also become infected and leave fields, shops and other work to join in the dancing mania. Women, men and children fell victim.

Some of the earliest recorded cases were made prior to the Black Plague arriving on the scene.

In 1027, 18 peasants “disturbed” a Christmas Eve service in Bernburg, Germany. They appeared in the churchyard and began “dancing and brawling”. The priest cursed them to “dance and scream for a whole year without ceasing”. The account states that the priest’s curse was fulfilled and the people eventually “sank knee deep into the earth, and remained the whole time without nourishment, until they were finally released by the intercession of two pious bishops.” Four of them died. The rest suffered from trembling limbs for the remainder of their lives (4).

In 1237, over 100 children were stricken with the Dancing Plague in Erfurt, Germany. They began dancing and jumping in the road until exhausted and fell to the ground. It was recorded that many of the children died and the survivors were left with permanent tremors.

The disease resurfaced in June 1278 in the Netherlands town of Utrecht. 200 people began to dance fanatically on the Mosel Bridge. When a priest crossed over the bridge on his way to administer to someone sick, the bridge collapsed and all 200 drowned.

The Dancing Plague wasn’t reported again until 1374 in Aix-la-Chapelle, Germany (Prussia). The afflicted held hands and danced in circles for hours in “wild delirium” and eventually fell to the ground completely spent. They groaned and cried out in pain and bystanders bound the victims’ waists with cloths and the pain subsided. Some bystanders thumped victims on the abdomen or feet to assist in relieving pain believed to have been gastric.

Many victims suffered from visions and hallucinations, screaming and calling the names of spirits or divine personages. The visions included witnessing heaven opening up and seeing Christ on a throne or the Virgin Mary.

According to the Chambers Edinburgh Journal Volume 9 by William and Robert Chambers, the contagion traveled to those watching. On September 12, 1840, the Journal reported that victims banded together and moved about the countryside. They wore cloths around their middles in preparation of their next fit (4).

A few months after the Aix-la-Chapelle incident, dancing mania struck 500 people in Cologne, Germany. Around the same time over 1,100 were stricken in Metz, France. The Chambers point out that, “The aftermath of the [Black Plague] plague created a series of religious, social, and economic upheavals, which had profound effects on the course of European history. It took 150 years for Europe’s population to recover.”

The Dancing Plague Given Several Names

The mysterious dancing epidemic lasted several centuries and was given various names as it moved from one region to the next. In Italy, it was known as the Tarantism Disease. Other names included, Dance of St. John, St. Vitus and in some regions, it was commonly called the demonic plague.

The dancing mania raged on until the end of the 1700s. During this time span, there were many theories about the cause of the plague, most centered around demonic possession, except for Italy.

The Tarantism Disease of Italy

Italians referred to the dancing disease as “tarantism” and believed it was the result of a tarantula spider bite (5). Common in the region, the tarantula wasn’t found in other European countries struck by the dancing plague.

Italians reportedly awoke from sleep claiming to be in pain from a bite. They exhibited crazed manic dancing and wild behavior noticed in those suffering from Dance Mania. It was believed that the spider venom remained in the person’s body and each year during the summer heat was reactivated.

In the 14th century, the dancing mania was dubbed the Dance of St. John (John the Baptist). During the 4th century, the Germans modified the ancient and Christian forbidden practice of Nodfyr to use on St. John’s Day.

The pagan ritual “Nodfyr” was part of the summer solstice ceremony that included leaping over a fire so the smoke could purify and protect from winter diseases. The St. John’s Day dancers leaped through imaginary flames repeatedly for hours (6). The fire/smoke purification practice was a common ritual throughout Europe, Asia and Greece.

In 1418, Strasburg, Germany was plagued with a resurgence of the dancing plague dubbed St. Vitus’ Dance. Belgium and the townships of Lower Rhine were also seized with “swarms of dancers” moving through the towns day and night with accompanying pipers (4).

Those afflicted were herded to the “chapels of St. Vitus, near Zabern and Rotestein” where priests conducted mass. The infected were marched to the altar where St. Vitus [martyred in 303 AD under Roman rule] was called to heal them. Many claimed to be healed.

The Dancing Plague was considered to be the work of the devil and those infected were possessed by demons. Countless exorcisms were performed with varied results. The mania spread from one area with the victims acting as though they were possessed by evil spirits. 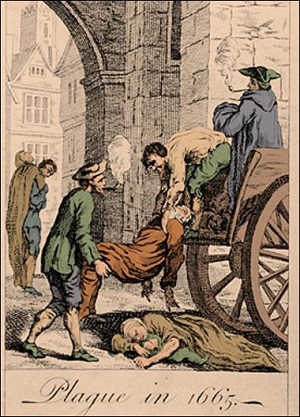 In the 17th century, the St Vitus’ Dance was diagnosed as Sydenham chorea. According to the US Library of Medicine, Sydenham chorea is an acute symptom of rheumatic fever that typically occurs during puberty (7). While some dance mania symptoms were similar to those of chorea patients, others, such as irritation at the sight of red or a weeping person simply couldn’t be explained.

Another possible explanation was Ergot poisoning. It can cause hallucinations and convulsions and is often the result of floods and wet seasons fostering “fungus claviceps purpura” that also forms on rye grain. Some outbreaks coincided with this seasonal fungus, but other didn’t.

Modern research analyzed the mental health at the time of the Dancing Plague and surmised the phenomena was possibly group hysteria and even group mental illness. It’s easy to understand how survivors of the Black Plague (1347 – 1353) may have been overly sensitive to the suggestion of another plague. Psychologists believe Black Plague survivors were so traumatized that mass hysteria could easily have perpetuated the spread of the dancing disease and made it as real as any infectious disease (8).

Another highly likely explanation points to Greek and Roman ceremonies and religious aspects that included dance mania as did other cultures during the Middle Ages. Participants worked themselves into a frenzy so they could “experience cathartic reactions to intolerable social conditions” or connect with spirit. It’s highly probable that remnants of these rituals found their way into Christian ceremonies (3).

Some of the chronicles during the Middle Ages document that the majority of dancing mania victims were actually from other regions. They were in fact pilgrims traveling and seeking out shrines and churchyards to perform their “unfamiliar customs”.

It’s possible that these pilgrims were misunderstood and locals fell victim to the mania. One chronicle states the dancers were from Bohemia, Austria, Germany, Hungary, Carinthia and Poland. It also points out that they picked up more pilgrims along the way.

While the cause of the Dancing Plague may never be fully diagnosed, the phenomena were real and witnessed for several hundred years.