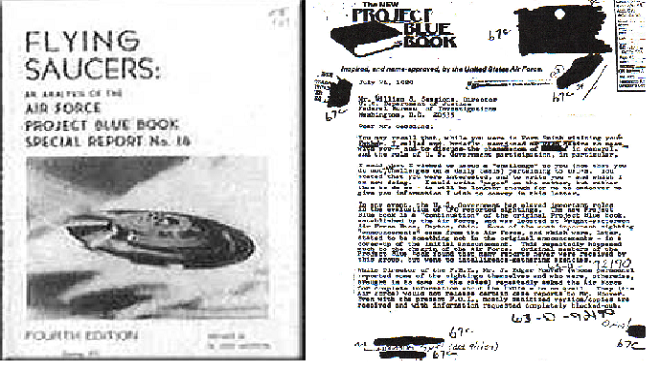 All the material related to Project Blue Book has long since been stored in the National Archives (2). Along with 84.000 pages of text, video copies of 18 home movies purported to be of UFOs shot between 1952 and 1967 have also been archived. The videos are of low quality, and what is being imaged is not entirely clear.

The small amount of visual evidence of UFO sightings compared to the number that were investigated can easily be explained by the fact that the Air Force conducted its investigation at a time long before the proliferation of video cams and smartphone cameras.

Home movies were made as early as the 1930s (3), achieving popularity with the introduction of Super 8 film in the 1960s.

However, home movie cameras, usually used to record family vacations, did not achieve nearly the degree of market penetration that modern camcorders have.

Home movie cameras became obsolete with the introduction of video cassette tapes and VCRs in the 1970s, coincidentally after the Air Force closed down Blue Book.

That is not to say that people are not recording strange things that appear in the sky. Indeed, more UFO recordings are being made than ever.

However, the federal government is no longer investigating UFOs, and because of tight budgets and the end of the Cold War, is not likely to resume doing so anytime soon.

People who see something strange in the sky, have been encouraged to report the sighting to local law enforcement or to scientific organizations that deal in such matters.

The Committee for Skeptical Inquiry (6) notes that the “science” of UFOology, as it calls it, is handicapped by a lot of eyewitness accounts, some unreliable.

MUFON has undergone some criticism for its lack of scientific acumen and a tendency to assume that at least some UFOs are alien spacecraft. A group called the Aerial Phenomenon Investigation Team (API) has a better reputation for scientific skepticism (7). Natural Events or Something More?

Nevertheless, the abundance of video recordings of sightings that are alleged to be UFOs cry out for a systematic analysis, using modern video interpretation techniques.

Such an investigation has to avoid the sort of assumptions generated by popular culture such as the TV show “The X-Files” filled with lurid tales of secret government conspiracies and alien abductions.

Indeed, a true scientific investigation of UFOs based on modern video recordings should start with no assumptions whatsoever. The old “X-Files” tagline “I want to believe” just gets in the way.

It can be safely said that such an investigation will find that the majority of modern, video-recorded UFO sightings can be explained as natural events or some kind of aircraft.

Modern science does not admit to the idea that aliens are clandestinely visiting Earth.

However, it is also likely that a small percentage of these recorded sightings will not be easily explained. Whether these sightings will turn out to be lesser understood, but conventional phenomenon or are evidence of alien visitation would tend to be equally exciting and worthy of being investigated in a scientific manner.