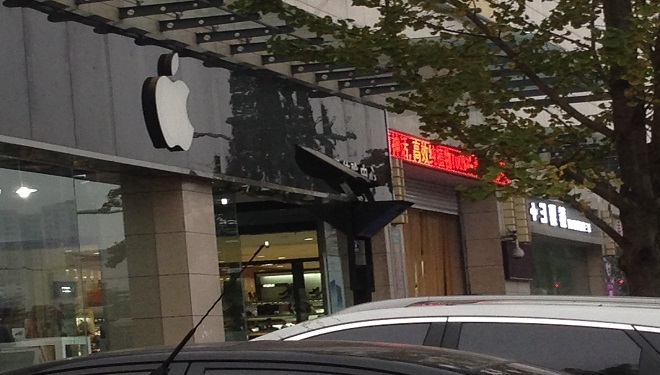 Nestled in the heart of ‘New Town’, Yongchuan, China’s testament to growth is an incredible Apple retail store. Well-heeled Yonchuan’ers pass by with pride.

Why wouldn’t they? Out of all the huge Chinese mega-cities, this sleepy little town was chosen to be home of only one of the handful of official Apple retail locations in the PRC.

For its part, the store doesn’t disappoint. From the decor and signage the place is first class; I’m shocked.

The store is not only immaculate, but has the latest Apple gear as well.

Over here the newest iPad Mini, over there the complete phone lineup from 5c to 6 plus.

From the black finishing to sleek tables, this Apple store is as good as any in China, let alone the USA.


About the Chinese Apple Store

The staff, too, is up to snuff. Sporting smiles and that “Apple strut” found in such places, eager Apple employees greet me at the door. They tout Apple, quote Steve Jobs and assure me that the gear is rock solid. “Any problems and you have one year to return it. That is the Apple way,” the salesman says.

The only problem is that it is fake.

Yes, contrary to what the store employees told me, this store is not licensed nor sanctioned to do business for Apple in China. This place is a fraud. Everything around me is.

Instead of representing the good of China’s rise, it shows the opposite. Rampant theft of American know-how overtly or covertly backed by the one-party state. This place is an indicator of China’s ever increasing attack on American Intellectual Property (IP).

China is the mastery of forgeries. For all I know the “genuine Apple” accessories are as unoriginal as the store. Nonetheless, this place fraudulently operates, just as it has for the past two years with impunity.

Even the employees have probably been hoodwinked by the owners of this firm. After all, they assured me they are part of the Apple team just the same as their American counterparts. “Everything is original Apple here,” employees coo.

Looks Can Be Deceiving

After reading about how well the store looks, one may be inclined to ask what is the harm. “Okay, they fake an Apple store. But you say it looks good, is there really a problem? They stock Apple gear which means that Jobs’ legacy gets paid. Sounds like a win-win, right?”

Win-win it is not.

There are many problems with that logic. First off, it is not licensed to sell Apple kit so there is no guarantee of product authenticity. After all, China is known for producing substandard pirated gear that is prone to fail. That’s precisely what happened to a young bride. Her iPhone caught fire when her not so genuine charger blew up and it cost her her life (1)

A second problem with China blatantly stealing Apple’s image is that Apple is not fully compensated. Even if all of the product is original, the store owners do not pay corporate monies and fees. This means that the Chinese store owners are potentially skimming hundreds of thousands if not millions from Apple’s coffers.

Thirdly, Apple has no control over this retailer. Companies create franchises and corporate stores to maximize profit while exerting control. They invest millions in maximizing the purchase experience and deserve to be compensated for this work.

Control is essential as it guarantees quality throughout the entire buying experience. The owners of this shop have nothing to worry about as they are beholden to no one but themselves. Today the shop looks great and seems to follow the Apple plan, but will that always be so? Seen in this light the win-win becomes a China win-win and Apple lose-lose.

Over ten years ago, China wanted to sit at the big boy table of international trade. In order to do so, they had to promise to make many changes within their system. One of these was to stop intellectual property (IP) theft and enforce the laws they had in the books to that end. In return, America would open up its doors to Chinese goods and trade and allow them to join the WTO.

At that time, China’s global piracy footprint was in the tens of billions. Today the value of China’s IP theft from the USA alone is as great as the value of all America’s exports to Asia. For every dollar we earn from selling to Asia, China steals another one from us.

Not only have they not made good on their promises but China has also exploited free trade for their own benefit. For example, a common practice is for a sub-supplier to lure a foreign firm into a partnership. Once this is done, the Chinese sub steals the foreign IP and customer list. It then bypasses the foreign firm and sells directly to the end user with stolen designs.

Even if the foreign firm sues, it usually amounts to nothing. It is a rarity for the Chinese government to enforce IP lawsuits against local firms. To do so could cause these companies to shut down, which leads to unemployment.

The communist fears this more than anything else. This imbues Chinese with more confidence that their IP indiscretions will go unpunished and they “borrow” even more. Had China made good on their pledge, none of this could happen, but happen it does. Even more so now than ever.

I Heard Things Are Getting Better…

It would be easy to claim that China is a big country and things will fall through the cracks. As some say, “Sure the PRC still has some IP hiccups, but things are getting better right?”

In light of complaints spurred on by rampant IP theft, China overhauled the relevant legal regime a few years back. The changes looked great on paper but lagged in practice. Even after updating its legal code, China was besieged by piracy and idea theft.

Undeniably China today is better than China decades back; at a minimum, it is possible to bring legal action in front of judges who have at least a modicum of legal knowledge. This was untrue just 15 years ago.

Once again, the changes are mostly cosmetic. Of course the judges today have legal experience, but it is of little use if the central government does not allow them to do their jobs. In a one-party state like China, the central government has its hand in everything. Consequently, the communist party typically makes decision for the judges rendering their experience useless.

It may be true that pirated DVD’s are harder to find on the streets nowadays. Although such piracy was rampant, it was mostly nickle and dime stuff. Hoards of street peddlers selling videos on the cheap. Their sheer numbers made it easy to buy the latest Hollywood flick on each and every block. To China’s credit they have eliminated these sellers, but it means little.

While its hard to cop an illegal DVD from the street by my house, this means little. If one really wants the latest pirated movie, they merely need to access taobao.com one of Alibaba’s online stores. From there one is just a few mouse clicks from buying knockoffs of all kinds. From the latest Hollywood blockbuster to Madden 15 for $1. (Six RMB equals $1)

They don’t even have to bother if they own a Xiaomi phone. On that, one can download apps and listen to Beyonce’s latest free of charge. While Xiaomi may be paying her royalties, I have my doubts, but more on Xiaomi later.

Simply put, China has progressed from being a country with tens of thousands of disaggregated small time IP nicking to state- sanctioned hyper theft. The faux Apple retail outlet and Knockoff Hooters are proof enough of this claim. Perhaps I had better explain.