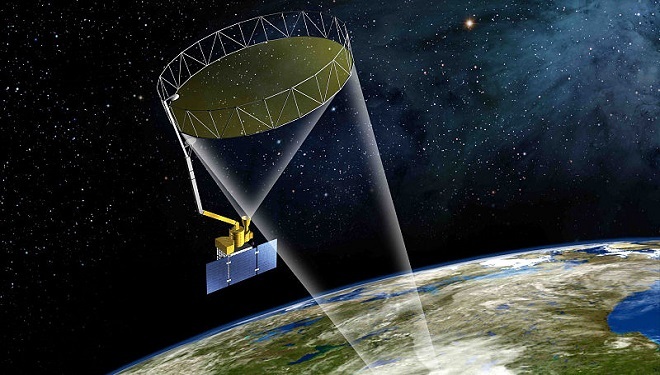 It will take off on top of a United Launch Alliance Delta II rocket into a near-polar, sun-synchronous orbit at about 410 to 425 miles above the Earth’s surface.

The SMAP will use a radiometer and a synthetic aperture radar to measure soil moisture to a depth of five centimeters and its freeze-thaw state.

According to the space agency, “The accuracy, resolution, and global coverage of SMAP soil moisture and freeze/thaw measurements are invaluable across many science and applications disciplines including hydrology, climate, carbon cycle, and the meteorological, environmental and ecology applications communities.”

The mission will allow for the coverage of the Earth’s surface every two to three days and will last at least three years.

The data that the SMAP gathers will be of vital importance to a wide variety of people, including farmers, climate scientists, and disaster relief officials.

Farmers will be better able to determine what amount of water is needed to grow their crops. Scientists will have a better understanding of the dynamics of climate change and how it may affect the water supply in various regions of the world. Disaster relief officials will gain a better understanding of how floods and droughts occur and how they affect the Earth’s surface.

A worldwide shortage of potable water is a vitally important problem. The Third World is suffering a water crisis that is impacting the health and well-being of billions of people (2). The United States, particularly Texas (3) and California (4), has also been beset by drought.

At the other extreme, floods have proven to be one of the most common hazards besetting people near bodies of water (5). Floods occur when rivers or streams overflow their banks and in the wake of storms such as hurricanes. Floods can become serious when they exceed the capacity of levees and underground pipes to contain and channel. But, soil moisture is another factor. Floods can become more severe when the soil becomes saturated and thus lacks the capacity to absorb a sudden onset of water.

The SMAP data will allow scientists to more accurately predict the onset of droughts and floods and to measure what their severity might be. Thus, public officials will have more time and information with which to prepare for these natural disasters, mitigating their impact and saving property and lives. Farmers will use SMAP data to plan crop watering, making sure that their product has the right amount of water, not too much or too little.

SMAP is the first in a series of four Earth observation satellites recommended by the National Research Council’s Committee on Earth Science and Applications from Space. The mission is launching at a time when NASA’s $1.6 billion Earth science budget has become under increasing scrutiny. The news that Sen. Ted Cruz would assume the chairmanship of the Senate Science and Space Subcommittee that oversees NASA has caused a media firestorm (6) and concern in the Earth and climate science communities.

Cruz considers himself a climate change skeptic and has a reputation as a budget cutter.

However, in response to these concerns, he suggested that he would like to refocus NASA on its “core mission” of space exploration, suggesting that the space agency’s Earth Science account may be vulnerable.

However, Cruz’s subcommittee does not appropriate money for NASA, but rather provides oversight, sets policy, and makes authorization levels. One solution may be to increase NASA funding to accommodate both space exploration and Earth science.