Will Microbial Fuel Cell Be the Key to Clean Energy? 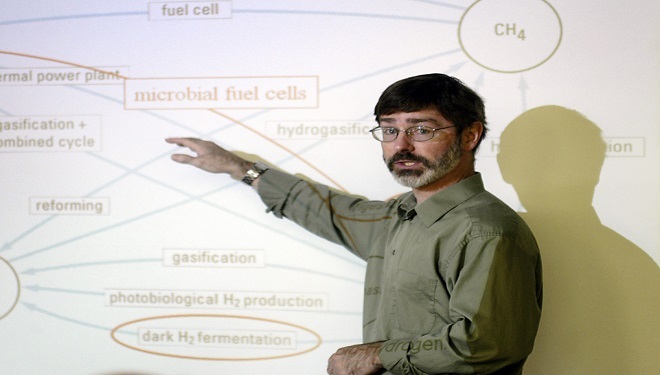 A new type of fuel cell, which uses waste as a fuel and bacteria as a catalyst, promises to turn this around and make waste water treatment a net generator of electricity.

Penn State (2) explains that microbial fuel cells work by using bacteria to extract electrons from organic matter. The electrons are transferred to a carbon electrode and then across a wire to a cathode where they combine with oxygen and protons to create electricity and water. Any biodegradable organic matter will do as a fuel.

The experiments conducted by Penn State have generated 1.5 watts of electricity per meter squared of electrode surface area using a pulse mode.

In a continuous flow mode, the microbial fuel cell generated 15.5 watts per cubic meter of wastewater going through it. The university envisions MFCs at wastewater plants servicing communities of 100,000 and generating .8 megawatts, enough to power 500 homes.


A Solution to Various Problems

The technology, if it were created on an industrial scale, has implications for alleviating two problems that vex the third world, lack of electricity and lack of potable water (3), Waste water treatment plants using MFCs could help provide both cheap electricity and clean drinking water to millions who lack both at the current time. This capability could enhance the health and well-being of people who are now obliged to drink less than pristine clean water.

The Navy is interested in microbial fuel cells as a way to power sensing devices on the ocean floor. These devices monitor everything from the ocean environment to the activities of enemy submarines. Unfortunately, the sensing stations are battery powered and constantly need replaced when they run out.

The bottom of every body of water (river, lake, or ocean) contains organic matter from dead water creatures, ranging from plankton to fish. This matter represents a potent fuel source that will allow a sensor station to run indefinitely.

This capability will allow the Navy to maintain monitoring of the world’s oceans in real time, without gaps caused by battery-powered sensors running out. The technology will prove to be a great advantage for American soldiers in any conflict fought at sea. One of the perceived drawbacks for MFCs is that they generate carbon dioxide as a byproduct. Some scientists maintain that the pumping of human-made CO2, a greenhouse gas, represents a source of global warming.

The theory goes that if left unchecked, global warming will cause an unsustainable increase in the world’s temperatures, raising sea levels and making some parts of the coastal regions untenable. Opinions vary in both the scientific community and public policy circles about how much of a problem this is. In any case, the Navy has an answer to this problem as well.

The idea is to run the process of a microbial fuel cell in reverse. Solar energy, microbes, and carbon dioxide could be used to create organic matter that then could be used as fuel. Thus, a device could be developed that would help to address the perceived problem of human-made carbon dioxide by sucking it out of the atmosphere and making something useful from it.

One can imagine these new devices being located near sources of human created CO2, such as coal-fired power plants and manufacturing facilities. Instead of being released into the atmosphere, the CO2 could be pumped through these plants to create fuel that could be used to generate more electricity or sold on the open market.

One great advantage of this process is that it provides carbon-producing plants a relatively cheap way to comply with carbon capture rules coming out of the EPA (4).

Conventional methods of carbon capture tend to be expensive, raising the cost of operating a power plant or factory. Using a MFC in reverse could actually make carbon capture profitable while maintaining coal, which America has in abundance as a source of energy.