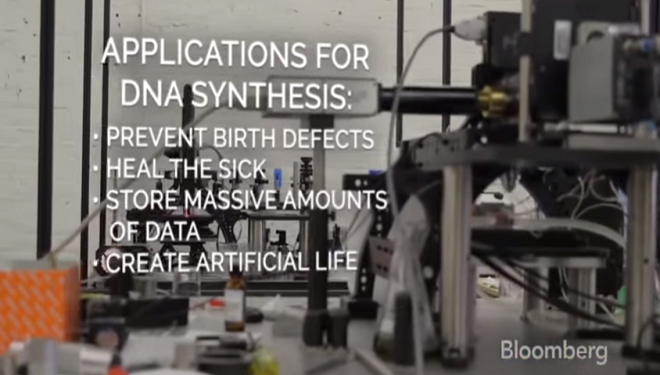 A biotech startup in California has announced it has raised the $10 million it requires to meet its target to enable customers to modify or create their own DNA.

Cambrian Genomics, a customer DNA firm based in San Francisco, says it is aiming to “democratize creation”.

According to the company’s founder, Austen Heinz, Cambrian Genomics plan to “democratize creation” by providing DNA mapping for customers wanting to “tinker with the genetic code of plants and animals” or even create their own genetically-modified creatures on their computers.

“Anyone in the world that has a few dollars can make a creature, and that changes the game.” (1)

But the ambitious biotech startup isn’t stopping at recreating already existing life on Earth. Heinz says that they want to make entirely new organisms which have not existed. Not only this, but Cambrian Genomics wants to replace “every existing organism with a better one”.

In order to achieve its aims, Cambrian Genomics says it has developed a means of reducing the cost of printing DNA.

DNA is made up of four primary nucleobases, adenine (A), cytosine (C), thymine (T) and guanine (G), which form base pairs. Cambrian Genomics uses proprietary technology to “synthesis, sequence, recover and assemble” these four nucleobases, to create custom-made DNA for their customers.

When the company receives an order for specific genes, it adds DNA chemicals onto tiny beads which are then layered onto a glass slide.

Color is then assigned to each DNA chemical by a machine. As SF Gate writes (3), the next step is crucial, as a laser is programmed to analyze the color combinations, ignore erroneous strands, and print the right ones by separating them from the rest. The final product is a powder which customers then place inside the cells of an organism.

Heinz’s 11-strong team has already raised $10 million from over 120 investors. These investors are praising the startup for, as venture capitalist Timothy Draper said, “…literally printing life.”

“I love Cambrian,” (3) said Draper. “The company is literally printing life. Can’t wait to see all the great things that come of it.” Criticism of the Project

Though Cambrian Genomics venture into the world of printing human life hasn’t been without its critics. While the company has yet to create human form, its rhetoric has been met with concern.

Referring to Heinz’s ambitions as a kind of “techno-libertarianism”, Marcy Darnovsky, executive director of the Center for Genetics and Society, a bioethics watchdog group in Berkley, is worried about Cambrian’s aims.

“We have to take serious people like Austen Heinz who say they want to modify future generations of human beings and upgrade the human species. I think that technical project is far more complicated than they acknowledge. Nonetheless, their story about what we should be striving for as human beings, as a society, I think is very troubling,” said Darnovsky. (5)

Genetically modified food and the companies that are responsible for it have long been (4) the cause for angry protesters to raise their placards in contempt. Rewriting human life takes the conception of genetic modification to new levels.

Does the concept of giving people the opportunity to become a genetic designer excite, worry or scare you? We’d love to hear your thoughts on this controversial subject.