The repository covers a range of US Government sources and reports from the Central Intelligence Agency, the Department of Defense, the Federal Bureau of Investigation, the National Archives and the National Security Agency.

The UFO repository also includes international sources from the Ministry of Defence in the UK and the National Archives UFO Files, which are a collection of British government reports from 1981 to 1996.

The nongovernment sources also include the Declassified Documents Reference System CU, a database of declassified federal documents which contain full-text access to report on sightings and government investigations on UFOs.

One interesting report found within the CIA section of repository is a paper about the CIA’s role in the study of UFOs from the late 1940s until 1990.

The report tracks the part the CIA played in investigating information about UFOs (2).

Beginning in 1947 with the emergence of the Cold War, which saw the first wave of UFO sightings in the US, the report traces the CIA’s interest and involvement with UFO research from 1947 until the early 1990s.

It chronologically examines the Agency’s efforts to solve the mysteries around many of the UFO sightings and appease the controversy this wave of UFO mania was creating.

The report makes reference to the conspiracy theory that the CIA had been secretly concealing its research into UFOs.

One of the sources listed in the FBI section is the FBI’s Unusual Phenomena Listing, a collection of materials released under the Freedom of Information Act by the FBI (3). The “unexplained” collection includes information and links to nine incidents dating from 1887 until the early 1990s.

The 1988 ‘Majestic 12’ case is listed in which two FBI officers received a memo titled ‘Operation Majestic 12’. The memo claimed to be a top secret government document that briefed the newly-elected President Eisenhower on a secret committee aimed at exploiting the recovery of an extra-terrestrial aircraft and concealing the work from public scrutiny.

The “Unexplained Phenomena” files also include information about the Roswell UFO sighting in 1947 and Project Blue Book, a project led by the Air Force which investigated UFO reports between 1947 and 1969.

A link to the National Security Agency’s UFO Documents Index is also present on the University of Colorado’s repository (4).

The reports listed on the index were made in response to the high volume of requests NSA received in relation to the subjects of UFOs.

Interestingly, the documents related to the Civil Action NSA was involved in during 1980 titled ‘Citizens against Unidentified Flying Objects Secrecy v. National Security Agency”, are marked with “*”. Furthermore, the title or a portion of the title has been replaced with ‘XXXXX’. 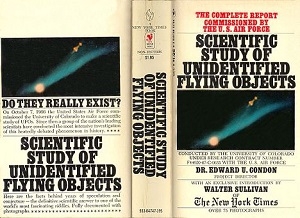 UFO Reports in the UK

One of the international sources included in the University of Colorado repository of Government UFO documents is a list of UFO reports in the UK held on the official British government website (5).

The report dates from 1997 to 2009 and shows the times, dates, location and a brief description of each UFO sighting. The incidents range from bright orange lights being seen in the sky to V-shaped formations made up of a series of lights, which rotated and then vanished.

The fact that the University of Colorado has compiled and published a repository of government UFO-related documents and sources is interesting in itself.

Condon – a well-known physicist – made his views clear from the outset that “no substantial evidence for extra-terrestrial visitation” was likely to result from the study.

However, in-depth analysis of the Condon Report revealed there were many discrepancies between Condon’s dismissive summary of UFOs and extra-terrestrial activity and the actual data (6).

Perhaps publishing such a comprehensive collection of Government UFO reports is the University of Colorado’s way of appeasing the former submissiveness towards the subject shown in the Condon Report?