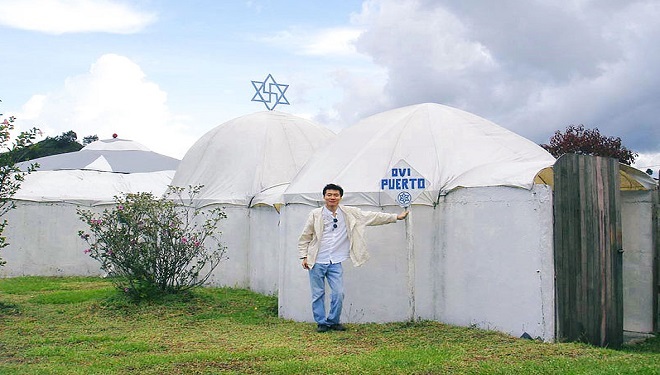 The filming was interrupted by the appearance of a purple, disc-shaped object hovering over a nearby construction site. The video of the UFO has gone viral on social media. Thus far, there is no explanation for what the object might be.

More recently, another TV broadcast, this time in Buenos Aries, Argentina, showed a UFO (2). It was flying in the background through a large window in front of which the anchors of a cable show called “Todo Noticias” were conducting a broadcast.

The anchors did not seem to notice the object, flying over an urban landscape, nor has the TV cable network even acknowledged its existence. The footage was posted to YouTube and has also gone viral

The two sightings are just the most recent of a rash of UFO incidents that have occurred in the skies over South America (3). Several such objects have been spotted and photographed over Argentina and Peru in 2015. Other sightings have been reported over various locations in South America in the past several years.

One possible explanation for this rash of sightings is that these UFOs might be aerial drones (4). Scientific explanations for UFOs have run the gamut from natural phenomena to elaborate hoaxes.

However, the proliferation of drones in private hands has opened up a new source for UFO sightings. Drones are used for aerial photography, package delivery, and real-time monitoring by a number of commercial enterprises.

Law enforcement has found them useful for patrolling cities and pursuing criminals. Private individuals have begun to use drones for their amusement. However, no one has come forward to admit that any of the South American sightings has been the result of a drone that was being used.

Time Magazine suggests, drones have caused a spike of UFO sightings worldwide. At a distance, a drone could look like an alien spacecraft.

A religion calling itself the Raelian Movement (5) is pretty sure that the UFOs being spotted over South America iare alien in origin.

The Raelians believe that life on earth was created by alien beings and that these aliens have frequently interacted with humans throughout history. It is the Raelian belief that aliens were mistaken for gods, angels, and other supernatural beings by primitive people.

The Raelians have an ethical dogma that requires its members to spread a gospel of world peace, democracy, and nonviolence. They have a remarkably liberal view for expressions of human sexuality. People joining the Raelian movement are required to forswear all other religions. Some have called the group intelligent design for atheists.

The Raelians in Peru have used the recent South American UFO incidents to demand what they call an embassy for aliens (6). The embassy would be a facility for the aliens to occupy once they choose to make themselves apparent to the outside world beyond the Raelian movement and to interact with earth nations.

According to the Raelians, the alien civilization that created life on earth is called the Elohim, and the messenger is called Rael.

The Raelians maintain that the aliens are eager to make first contact with humans, but only if they are welcomed. To demonstrate that the Elohim will be welcomed, the Raelians advocate the building of an embassy as a gesture of good faith (7). The embassy has to be in “neutral territory” and be granted rights of extraterritoriality and guaranteed neutral air space. In return, the country willing to host the embassy will be given the scientific and spiritual guidance of the Elohim.

The Raelian doctrine seems to be informed by the “end of days” mythos that is part of the dogma of more conventional religions. But, instead of Christ returning to bring about the kingdom of heaven, an alien would come down from what is essentially the kingdom of heaven and bring its benefits to the benighted earthlings.