Ancient Vikings May have Traded with the Ancient Arabic World 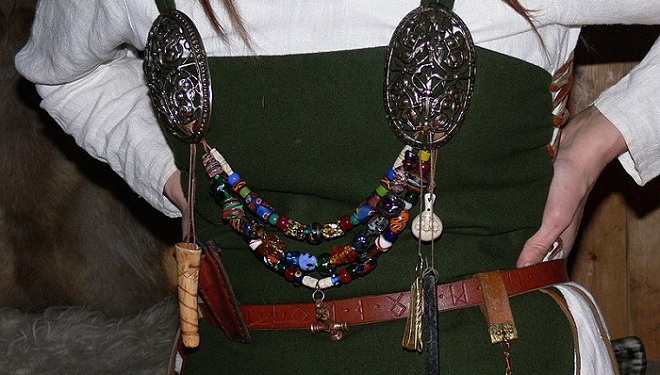 SallyPainter view more articles
Facebook 0 Twitter 0 Pinterest 0 Google 0 LinkedIn 0
What do a ring and a 9th century grave in Birka, Sweden have to do with Islam? According to archeologists, everything!

During an 1800 excavation of a 9th century grave in this Swedish Viking town, scientists discovered a silver ring they believed was Islamic in origin. How did an Islamic ring end up on the finger of a Viking woman?

The silver ring supports a unique piece of violet-colored glass. Originally, the excavators thought the glass was an amethyst stone. The identifying marks that connect the ring to Islam is the engraved glass inscription in Arabic Kufic “interpreted as reading ‘il-la-lah’, i.e. ‘For/to Allah.’”

In February 2015, biophysicist Sebastian Wärmländer of Stockholm University and his team took advantage of the latest technology to examine the ring closer.

Wiley Online Library published the results of the SEM imaging EDS analysis of the Viking Age (793- 1066 AD) grave. This was when the previously assumed amethyst stone was discovered to be a rarer and more exotic setting for that time period – glass (1).

The analysis further revealed that the ring “has rarely been worn, and likely passed from the silversmith to the woman buried at Birka with few owners in between.” This information strengthens the evidence that there must have been “direct interactions between Viking Age Scandinavia and the Islamic world.” (2)

Specifically, the ring showed very little signs of wear before being buried with the Viking woman. With no other similar objects directly related to the Islamic culture found at the archaeological dig site, the ring is a singular and extraordinary find.

While the connection between the Viking and Islamic cultures appears in thousand year old ancient texts, archaeological evidence of that connection, although found, has been rare (3).

According to Science News, nearly 3,400 years ago, Scandinavians (Vikings) traded with Egypt and Mesopotamia for highly-prized glass objects.

The discovery of two Egyptian cobalt-blue glass beads in a 3,400 year old Denmark grave gave archaeological (4) proof that the trade between Denmark and that region had occurred. The beads perhaps found their way into Denmark via the European trade routes (5). The collection of beads was taken from 12th and 14th century BC burial sites that spanned areas in Denmark and northern Germany. Out of this cache of nearly three hundred beads, only 23 Danish glass beads were chosen for further analysis.

Two of those beads were the cobalt blue glass beads found at the site of “Danish Bronze Age graves.” The two beads were discovered in a grave dated 14th century BC. The grave was located on the island of Zealand in Denmark and belonged to a wealthy female.

The analysis determined that the beads came from the “glass workshops of Egypt’s pharaohs and Fertile Crescent rulers.” Until now, France is the farthest region outside the Mesopotamia region where ancient Egyptian glass has been excavated.

With this recent analysis of the ring found in the 9th century grave in Birka, Sweden, scientists confirmed that Vikings and the Islamic nation at the very least participated in the European trade route. Due to the lack of wear, scientists speculate that the ring most likely made its way directly from the Islamic craftsman to the Viking woman through the trade route.