Are The Freemasons Becoming Less Secret to Combat Declining Membership?

What is less secret is the decline in Freemason numbers, with the group losing almost 3.8 million members since their peak in the late 1950s.

Is the reason this male-dominated society is claiming to be more open and contemporary an attempt to drum up support and combat declining membership?

The earliest masonic text, The Halliwell Manuscript, dates back to between 1390 and 1425. This ancient fraternity has included some of the world’s most prominent historic figures, including Winston Churchill, George Washington, Mark Twain and Mozart.

However, the once compelling, enigmatic and elaborate secret society, which saw world capitals such as Washington D.C built around Masonic symbolization, no longer holds the magnetism and sway it once did.

As older members die, the Freemasons are struggling to recruit new members. Consequently numbers are dwindling.
According to the Masonic publication Freemasonry Today (1), during the last two decades, many Freemason lodges around the world have lost half of their members.

When asked whether the Masons are a secret society, the UCLA history professor Margaret Jacob, a leading expert on Freemasonry, said that the suggestion was absolutely false (2).

James Stolhand, who is trying to start a Freemason club at Weber State University, supports Jacob’s claim that the Freemasons are not an especially secret culture.

“We’re not necessarily a secret society; we are a society with secrets,” said Stolhand (2).

Stolhand has been a Freemason for five years. He is the worshipful master of Gateway Lodge in Clearfield, Utah. The Freemason is striving to raise awareness about the Masons and create a place to share information that helps the fraternity to be perceived as more open and less secretive.

He admits that Freemasonry has experienced a sharp decline in membership over recent decades and has continuously declined in the United States since 1959.

I want to provide a forum for those who are interested in the fraternity to come together and talk about it with well-informed brethren without having to go through the intimidation of actually going to a Masonic temple,” (3) Stolhand told The Signpost, a Weber State University publication.

29-year-old Lee Ballard is a member of the Lafayette Kiwanis Club. Talking to JC Online (5), Ballard explained what it was like being a younger member of a group that comprised mostly of people of retirement age.

“It is a little concerning that most of them are older and [retired], but that makes sense,” said Ballard (5).

Lee Ballard said that himself and his fellow young members of the Lafayette Kiwanis Club don’t mind being the youthful minority of the group and that they find the older members’ stories insightful. 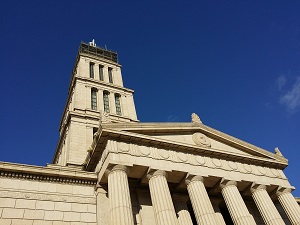 However, Ballard is definitely in a minority as given the Freemasons’ dwindling numbers, the majority of youngsters are not especially keen on joining a club comprising predominantly of grandparents.

In order to combat the lack of youthful enthusiasm for the antiquated society, suggestions have been made that the organization is undergoing a rebranding exercise.

Evidence of the Freemason’s rebranding was seen in 2012 when the United Grand Lodge, the largest Masonic group in the UK, published its first independent report.

According to the BBC, the Future of Freemasonry researched by the Social Issues Research Centre aims to begin an “open and transparent” discussion before the group’s tercentenary in 2017.

“We’re being proactive now, it’s essential we get people’s minds away from these myths,” Brown told the BBC (4).

The Future of Freemasonry report spoke of a “quiet revolution” taking part among Freemasonries. However, Brown believes that certain information about the society should be kept secret from the public.

“Keeping a bit of mystery is good news. If people joining know absolutely everything, where would the excitement be?” Brown asked.

For the last three centuries, Freemasonry has been a dominant force of society. Today, the Freemasons face major membership challenges.

In order to overcome such challenges and to appeal to younger members of society, freemasonry, it seems, is having to adapt to 21st century practices, including losing much of the secrecy and mystery that was perhaps the biggest defining Freemason feature for centuries.