DARPA is Looking to Build an Unmanned Submarine Stalker 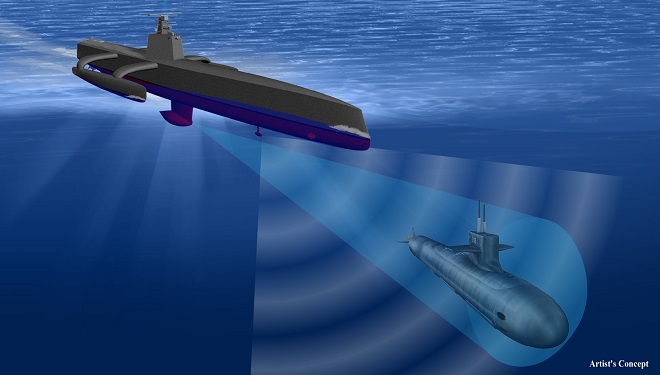 Allen Taylor view more articles
Facebook 0 Twitter 0 Pinterest 0 Google 0 LinkedIn 0
If you’re going to run a Navy using unmanned underwater vehicles, then you should count on developing technology that is designed to act against such vehicles.

You can bet the enemy is working hard to hit you under the salt pellets, as well.

It looks like the Defense Advanced Research Projects Agency (DARPA) is thinking along the same lines. The agency has a program called Anti-Submarine Warfare (ASW) Continuous Trail Unmanned Vessel (ACTUV) and the agency operators are developing a new type of unmanned surface vessel designed to track ultra-quiet diesel-electric submarines (1).

The system used to detect other vehicles under water is based on radar, but the challenge is developing a system that conforms with international regulations for preventing collisions at sea (COLREGS).

While radar has its advantages, one of its disadvantages is the inability to determine whether a vessel is a sailboat or powered.


How to Solve DARPA’s Radar Problem

In order to reduce its reliance on radar, DARPA has requested information on available technology to automate “lookout by sight,” a requirement of the COLREGS. The information DARPA wants is in three major areas:

If DARPA gets the technology it wants, it will be able to build an unmanned submarine tracking device that takes away the enemy’s element of surprise.

The sailor in Montana sees the metal codfish and yells for his commander, “I spy with my little fishy eye a Chinaman peaking under my salty sea.” In nothing flat, a torpedo shoots out of some top secret orifice under the Alaskan peninsula and destroys the unmanned Chinese sneaker vessel.

It Takes a While to Find the Right Stuff

DARPA is asking for contractors to submit responses to its request for information (RFI) no later than April 28, 2015 at 4 p.m.

Assuming the agency gets a few responses for its RFI, someone will have to sift through the responses and prioritize them so that contact is made with the right personnel. This should lead to testing new technologies, incorporating the best ones into DARPA’s programming and implementation plans for its development program.

If the agency finds what it is looking for, it could still be a few years before the final product is tested and put into military hands for actual combat usage.

Still, it’s pretty cool technology even if it only exists in our imaginations right now.