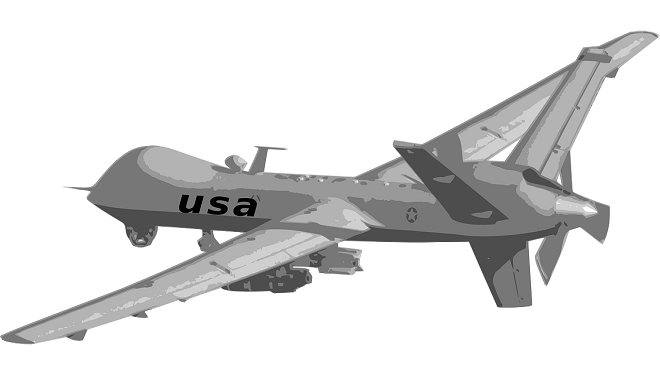 Allen Taylor view more articles
Facebook 0 Twitter 0 Pinterest 0 Google 0 LinkedIn 0
Ever since Wilbur and Orville lifted themselves off the ground, nations have been in a race to establish and maintain air superiority.

This battle reached its zenith in World War II when fighter pilots on both sides of the ideological divide engaged in dogfights over Europe.

From there, the battle for superiority turned left and flew into outer space.

With new technology comes new challenges and new contests for superiority. America may have been first to implement a drone strategy for war and surveillance, but unmanned aerial systems have become much more affordable for the rest of the world.

Guess what? We have a new race.

Unmanned aerial tactics are nothing new. Balloons were used during the Civil War, mostly for surveillance and reconnaissance (1).

However, it wasn’t until World War I that unmanned aerial vehicles became a reality (2). While experimentation with drones continued throughout the 20th century, the U.S. did not officially use them for combat until 2002 (3).

Throughout the wars in Afghanistan and Iraq, the U.S. has continued to use drones for surveillance and firepower. There have more drone strikes under the Obama Administration than there were under Bush, indicating that they are becoming a common tactic (4).

With the adoption of any new technology, the increase of said technology results in the lowering of cost, which makes it more affordable to more buyers.

Such is the case with drones. Now that the nation’s enemies have started acquiring them (5), the U.S. is expecting an increase in enemy drone usage.

To prepare for that eventuality, U.S. defense leaders have adopted technologies to combat enemy drones, including lasers to shoot them out of the sky. So what’s the next phase of drone warfare look like?

The Next Phase of Drone Warfare

Some military experts are predicting drone dogfights (6). Realistically, that’s not too far out of the realm. And if 19 Islamic terrorists can hijack a handful of American planes and fly them into tall buildings, there’s not much that could stop them from piloting unmanned aircraft and doing equal damage.

That imagined dogfight could happen at any time over Los Angeles—or Miami, Dallas, Chicago, and Pittsburgh. For that reason, military leaders are looking for ways to continue to maintain air superiority in its drone squadrons (7).

DARPA’s System of Systems (SoS) Integration Technology and Experimentation (SoSITE) program is designed to assist military leaders with development tactical and strategic plans for integrating drones with manned aircraft wartime operations. So what would that look like, exactly?

Essentially, what they’re talking about is manufacturing unmanned aircraft with weapons systems comparable to manned aircraft and deploying both manned and unmanned aircraft as a single unit for combat missions. Not only that, but they want to be able to kick these systems out of the factories and into the air at a faster rate than the nation’s enemies can respond to our production levels.

In order to make that happen, however, a lot of technological progress has to take place. Developers have to hurdle the cost of the electronics and other materials used in the production of technological assets. They’ve also got to develop software technology rapidly to make these advancements pay off in the long run.

The U.S. has never let its challenges dictate mission. By nature, Americans are overcomers, and some might say overachievers. DARPA has already awarded contracts to major defense industry players to work on manned and unmanned integration.