Idiotic Theory of the Week: Why Jeff Rense Can’t Be David Koresh 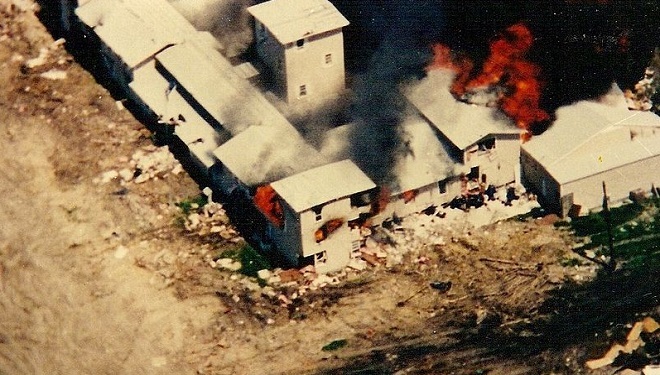 Seamus view more articles
Facebook 0 Twitter 0 Pinterest 0 Google 0 LinkedIn 0
The unnecessary death of 87 men, women and children in Waco Texas circa 1993, at the Branch Davidian Compound, is unforgivable. It stands as one of the worst Federal law enforcement, publicity stunts in U.S history.

David Koresh, like any cult leader, was a bit of a loop; nevertheless, the Feds’ smear campaign muddied the waters about his life after the events. This has led to Koresh becoming something of a sick Jim Jones figure for some while for others he is something of a folk hero.

In reality, he seems neither. Had he lived Koresh probably would have been convicted on statutory rape offences (depending on the source). However, this was not what the authorities were after him for. It was for supposed firearms violations.

Nevertheless, were Janet Reno’s Feds not so intent on putting into practice all manner of Psyops on the Davidian’s, while acting like impatient, uber macho fools, a whole heap of people like the aforementioned Koresh would likely be alive today (1)(2)(3).

Nevertheless, one thing we can tell from his hilarious portraits: He is clearly not David Koresh. Koresh (for all his bull) had looks and no small amount charisma. In his own weird, deluded way, he was also honest.

I would like to ask how the guys also managed to be in different places at different times throughout their lives. Hence, the bizarre conspiracy theory that Rense is Koresh is dead in the water almost automatically. Yet this ridiculous little slur helps give the uninitiated an insight into Camp Kook-a-munga (4)(5)(6).


They Call Me Bruce

Note, in the above paragraph I mentioned

A) Koresh looks nothing Rense.
B) Koresh is deader than Kanye Wests marriage.
C) Both Koresh’s and Rense’s lives and careers have been documented and witnessed by hundreds.

Even at Kook-a-Munga the above facts are accepted by all but the most troubled campers. Therefore, it is unfair to tar the loops out there as believers in this Koresh/Rense fantasy. Nevertheless, in this epic, kooky, sack race to the bottom, someone crazier always out jumps the others. When they cross the finish line, the knives come out while hypocrisy, ego and delusion ensues.

The originator of the “Rense is Koresh” tale is a fellow by the name of Aldaz Sergio, who goes by the moniker of Bruce Montalvo.

Montalvo, calls himself an “investigative journalist” (clearly, he has a sense of humor). Bruce has been annoying all manner of jerks for a few years now. Rense is but one of his recent marks.

In early 2013, he and his ex-boss – the infamous Pete Santilli – targeted Stew Webb via a phone interview in which he recorded and spliced Webbs comments. He (Montalvo) then played the so-called interview on Webb’s enemy Pete Santillis’ show.

Webb was understandably upset about all of this as it made him look bad. However, Webb needs no assistance in looking like a jerk. He schills for frauds like Kathy O’Brien and John Lear for starters. I also advise looking at his entry on an unofficial Alex Jones wikia page. It is surprisingly well sourced for Jones’ fans and makes for some disturbing reading and the guy is every bit as bad as Montalvo (7)(8)(9)(10)(11).

Authors note: What follows makes the “Mad Hatters Tea Party” like a meditation session with the Dalai Lama. So I advise reading the following carefully. Conspiravangelists at work and worship is a messy, confusing, crazy, ugly affair (12).

Unsurprisingly, Webb is great friends with the losers at “Veterans Today.” His pal Jim Fetzer and its incredulous owner Gordon Duff were also involved in a running war with Mr Santilli. This is where hilarity meets conspirahypocrisy head on.

In January of 2013, shortly before the Montalvo/Webb incident, Fetzer wrote an article entitled “Lunatics R Us.” His essay criticized Santilli and his pals and their lack of credibility, bald ass lying, and their insane ideas. He also did the standard conspirahypocrite line that Santilli and company were part of some Sunstein operation (precisely what Santilli had said him).

In his righteous anger concerning Montalvo and Santilli, Webb ignored something funny about his fellow crank Fetzer. Fetzer himself has endorsed the splicing and dicing of footage by cranks like John Hankey. Moreover, Fetzer’s minions like Gary King have acted in a similar manner to Montalvo manipulating old interviews to create mock debates with serious, non-kook researchers (13).

The clinch here is Webb also has a well-pronounced dislike for our old pal Jeff “Not Koresh” Rense. Indeed, he expressed his disdain for him on a VT Radio broadcast (14). Despite this, Gordon Duff, Webb’s boss at VT, was a guest on Rense’s show in early March of this year (15).

Pete Santilli, the guy who gave the nut Montalvo his big break, has his own show on Rense’s network. Rense, by the way, has regulars on his show like white supremacist douche bags David Duke and Derek Black (7). By using Montalvo as a starting point and branching out, one can see how illogical and crazy it has become. The above milieu should be a lesson to any beginner searching for alternate views. Namely, the so-called alternative media for the most part is every bit as bad as the MSM it purports to hate.

One of the excuses I often hear from prominent conspiracy shock jocks is “everybody is entitled to an opinion.” What they are really saying is the more diverse their content and guests, the more consistent ratings they get.

There are some honest, decent people out there doing useful stuff in the mega-conspiracy media. Indeed, an article listing the best of the rest is probably necessary. I also plan to do an interview with a conspiracy jock on the circuit. I hope the tools I give the readers will enable them to become good solid researchers and not conspira-tools like everyone I mentioned in this essay. Jeff Rense may not be David Koresh, but he is undoubtedly a useless, bigoted quack.