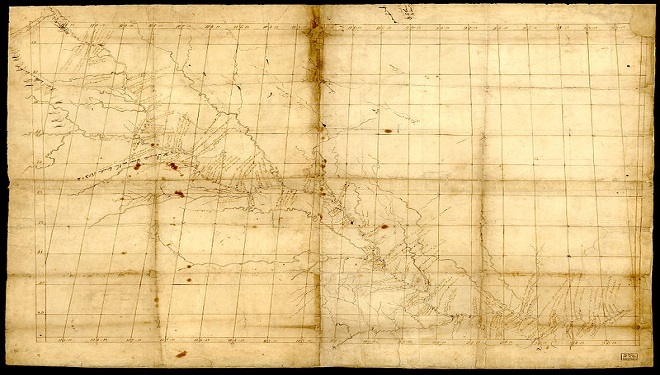 The Lewis and Clark expedition, the “Voyage of Discovery,” is well-known in the United States as an excursion to explore territories of the far West. Since around the time of the Revolutionary War, Thomas Jefferson had dreamed of sending a group to explore the West.

President Jefferson was fascinated by the West. He had one of the largest libraries in existence about the American West and, as he did with many subjects, gave great thought and study to the topic.

Though tasked with documenting flora and fauna, Lewis and Clark’s primary objective was to find “”the most direct & practicable water communication across this continent for the purposes of commerce.”

While preparing for their departure in 1804, President Thomas Jefferson handed them a map of the Missouri River that would prove very useful.

That map is part of an incredible story itself!


Welsh in the Americas More than 800 Years Ago

Few people might have guessed how far from that mountain village John would travel, the awe-inspiring sights he would see, and the life he would lead. All based on what well could be a fantasy.

Evans grows and a Welshman named John Dee is creating a lot of interest in the 1790s by resurrecting a story about a tribe of Native Americans that might have connections to the Welsh.

It comes from a story about Prince Madoc or Madog. In it, a Welsh prince supposedly sails to America in 1170.

Although it seems the prince’s parents existed, there’s not much to show that he himself did. Most likely, it’s part of a story promoted by the British, but that’s a little further in this story.

It’s said that 100 men, women, and children build a colony and, according to an account by cartographer Humphrey Llwyd, Madoc returns to Wales to gather several more shiploads of settlers and sail back to “that western countrie,” porting in “Mexico” and not being heard from again.

It’s asserted that the expeditioners intermarry with Native Americans and create people known as the Madogwys. Some think these people might be connected with archeological sites such as Devil’s Backbone near Louisville, Kentucky.

Madogwys sites have been hypothesized in many locations ranging from up north in Nova Scotia all the way to the Yucatan and even the Amazon…and as far west as the Zuni, Hopi, and Navajo tribes of the U.S. Southwest! 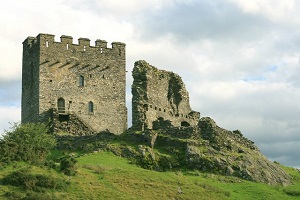 The Madoc story might have gotten its biggest marketing boost from promotion by the United Kingdom as a way to claim land in the “New World” and trying to trump Spanish claims.

As part of that, the Welsh bard IoIo Morgannwg asserts to a crowd that young Welsh men should get themselves over to America to claim that right.

In that crowd is John Evans: now a farm hand and weaver whose eyes are shining with anticipation. Having listened to the fascinating tales, John joins up with Morgannwg. The two make plans to explore the Missouri for these Welsh Native Americans, but Morgannwg backs out.

His spirit of adventure undaunted, John finds someone to give him enough money for a cheap spot on a ship, sets sail for America without his travelling companion, and arrives in Baltimore in October, 1792. He gets a job in a surveyor’s office, learns this skill that will help him in his explorations, and saves up a little less than $2.00. 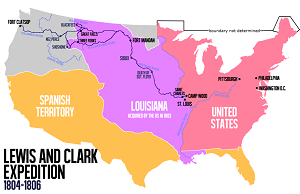 With the weather warming and Baltimore’s horrendous yellow fever epidemic starting to kill thousands, John Evans leaves Maryland’s coast and heads for the Great American West to find the Madogwys: the descendants of the Madog tale.

His travels will include exploits like hunting bison with the Omaha, watching Mandan buffalo dances, encountering “strange” wild creatures like alligators, annexing part of North America for Spain and, of course, making the map that would guide the more famous Lewis and Clark expedition.

He walks to the Mississippi where Spanish territory begins on the west side of the river. So, he changes his name to Don Juan Evans, pledges allegiance to Spain, gets malaria, his clothes go to tatters, and his money is gone – a rough start.

Crazed from the disease, baked by the sun, temporarily blinded, being in unknown places, and encountering creatures new to him like alligators, Evans somehow makes it as far as what was then Spanish Louisiana before being imprisoned in St. Louis.

Though in New Spain, the city is controlled by the French. They listen to his story, don’t believe him, and toss him in jail as a spy.

A U.S. judge vouches for John’s character, then Evans joins a Scottish general who the Spanish have tasked with an expedition to explore the Missouri and see if it’s possible to find a route to the Pacific Ocean from the Missouri River’s headwaters.

John walks thousands of miles, lives with the Omaha and Arikara people, is chased hundreds of miles by the Lakota, and thinks he’s finally found his lost Madoc tribe when he encounters the Mandan. Their fair skin and a few language similarities to Welsh look promising.

But, try as he may, he just can’t find a good connection culturally or linguistically.

By this time, he and a few others have blasted British forts and plant the Spanish flag above the 49th parallel…effectively taking and holding a large chunk of real estate for the Spanish empire for nine months. This doesn’t make everyone happy.

So, after a reported failed attempt to kill him (that was foiled by the Mandan), no support from the Spanish, no Welsh tribe, and a bone-chilling winter, Evans decides it’s time to give up the dream and leave.

He returns to St. Louis in 1797 with stories that impress the governor enough to give him a job as well as something else of great value: his map of the Missouri Basin and Yellowstone River.

Disheartened from being unable to find a Welsh tribe, John Evans died in 1799, ending his days in an anonymous grave. He left behind journal entries, letters, and his map work for others to use to piece together his life.

One of those “others” includes a distant relative Gruff Rhys who created an album, movie, and book on this subject in 2014 titled American Interior.

Often, explorers and adventurers leave behind ordinary lives and, even if they “fail” at their goal, are at least able to say that they did things many others have not.

Such is the case with Mr. Evans. He found no Welsh, made little money, and died in near-anonymity.
But, he lived an adventure and made that map.