Intelligent Sensors May be the Key to Winning Future Wars

They study the doctrines of their enemies, how weapons systems are affected by weather and other natural conditions, factors that affect troop morale, conduct espionage in order to learn what they do not already know about the enemy, and continuously test the effectiveness of their own weapons systems.

Technology is a huge component to any war. Ask a military historian about the factors that led to the Union victory in the U.S. Civil War and you’ll almost always hear how Union factories were able to develop more lethal weapons systems more quickly and get them to the soldier on the battlefield (1).

As soon as U.S. military commanders learned that technological superiority was a major factor in winning wars, it became a top priority to conduct research to improve military technology all around.

Every major branch of the military has its own research department.

One technology today’s military leaders use and continue to research is sensors (2).


Why Sensors Are So Important to Maintain Battlefield Superiority

Situational awareness is one of the critical factors military leaders seek to enhance among soldiers on the battlefield. It’s important that soldiers have the ability to know and understand the immediate threats and risks that impact their effectiveness in the heat of the battle.

If you’ve heard the expression “the fog of war,” then you may have some idea as to how quickly confusion can set in once the bullets start to fly.

So what is the Communications-Electronics Research, Development and Engineering Center’s (CERDEC) ISA technology designed to do?

Military leaders want to develop technology that enhances a soldier’s ability to see, feel, and understand what is going on around him through dust, smoke, snowfall, heavy rain, and other environmental factors that impact a battlefield.

However, that technology has now filtered over into enemy fighting units, so the U.S. no longer maintains that advantage (2). They need to continue to improve U.S. battlefield technology to regain that advantage. 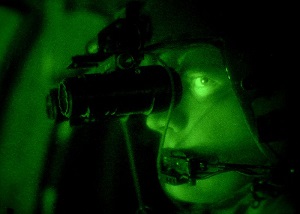 How ISA Could Be Used In Future Wars

It doesn’t appear that the Global War on Terrorism will come to an end any time soon (4). As more operations are conducted in the Middle East where deserts are vast and subject to conditions that impede visibility, the U.S. military needs a way to maintain superiority while enhancing soldier situational awareness.

If a military operation must be conducted during a haboob (a desert sand storm that completely shuts down visibility) and Army troops on the ground have a system that will communicate between soldiers, their commanders, and their adjacent units, that will increase the advantage U.S. soldiers have against their battlefield opponents.

But the desert is not the only place with natural inhibitors to situational awareness. The sea has its squalls, arctic regions have their snow blizzards, and other weather conditions can be degrading to military war fighting aims.

If the U.S. Army can maintain situational awareness at the individual soldier level during any condition, then it will maintain technological and battlefield superiority, giving it a leg up with a greater chance of victory.

According to CERDEC, the key to battlefield advantage in future wars boils down to microchips. Who am I to argue?