Xiaomi loyalists also leverage this ideal to prove Xiaomi’s originality. Recall, that Xiaomi and its loyal fans go out of their way to point out subtle differences between their handhelds and foreign rivals. In so doing, these people shore up the “fact” that Lei Jun’s phones are unique.

The incredibly loyal Xiaomi Mi-fans tout differences in camera placement as proof positive that their phones are not replicas. Furthermore, they tell you that the name of their gear is not even remotely similar to Apple devices. By eschewing monikers such as iPhone or better yet, iPhrone, Xiaomi is as original as Apple. As illogical as this may seem, it fits wonderfully within the reality of piracy in China.

Which all leads us to the final component-nationalism. It is no secret that the ruling Communist party foments anti-foreign sentiments in order to rally the masses. Due to its illegitimate rule, the party has to prove its worth. Historically it has done so by focusing on real or imagined external threats. To hear them tell it, the power of the communist party is the only thing standing between China and hostile takeover.

Crucial to this narrative are not so subtle reminders of foreign occupation in the past. Beijing does not allow the citizenry to forget that it was first the English, then Japanese and pretty much everyone else, who contributed to the demise of the Chinese empire.

Among other things, those ruthless foreign scoundrels forced opium onto the Chinese causing addiction of epic proportions. Beijing claims it was this that turned the “most advanced and civilized country” into little more than a fetid land of bed-ridden junkies dozing from fix-to-fix. Leveraging such imagery, the communist party seeks to maintain hold on its empire. “In communism we must trust!”

Interestingly enough, the notion of shanzhai goes well with with those optics.

The best definition of “Shanzahi” is pirated goods of many sorts. Loosely translated the term means mountain hideout or bandit. It connotes bands of Robin Hood types who sought to spread wealth equally.

The mountain bandits, like Robin Hood, were seen as vicars of justice and assisted the common man. They and their deeds were to be revered. Shanzhai thus thrives with the anti-foreigner communist rhetoric. Chinese shanzhai becomes a tool of the mainlanders to right the wrongs of foreign exploitation.

Think about it like this, firms like Xiaomi typically aren’t cannibalizing designs from one another. They are pilfering from the major global players who have state-of-the-art design and performance. In Chinese minds, it may be true that Western brands are primarily the victims of shanzhai. But then again those same firms are making money hand-over-fist in China. This being the case, is it so bad to create a “shanzhai tax” to even the scales?

And so it is, shanzhai becomes an commercial equalizer. (Xiaomi claims to lose a high percentage of sales to fake goods. Such piracy has nothing to do with the point of this section).

Shanzhai becomes an integral part of the Xiaomi credo, i.e. support the local underdog. So what if its gear is heavily inspired by firms from abroad? One of the principal tenets of shanzhai is to take a swipe at the powerful. This is even truer if the victim hails from overseas. 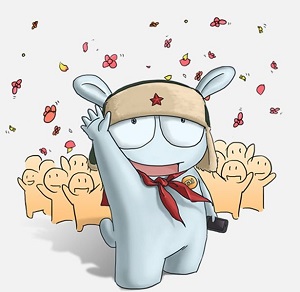 Xiaomi Relies on its Redness

Lei Jun and company do not stop there. They rely heavily upon communist cred. Lei is a card carrying member of the party (1) and Deputy to the National People’s Congress. This is the governmental organ mandated with rubber stamp laws that Beijing demands. His position therein means that Lei Jun sits in on the law-making sessions affecting Xiaomi’s future.

Not one to look a gift horse in the mouth, Lei does all that he can to fashion his firm into a communist-friendly affair. The company has formed its corporate plush toy corporate mascot after a PLA folk hero. The fuzzy bunny is so red that it is adorned in communist regalia and bleeds communist innuendo and imagery.

Many in China say that the plush toy bears a remarkable resemblance to non other than Lei Feng (2), a Red Army legend (3). This makes sense as comrade Feng exemplifies the great of Mao’s China. Studying the exploits and valor of Comrade Lei are still mandatory across Chinese schools. This intrepid soldier allegedly lived (4) during the time of Mao and represented the good of the Chinese race and the party.

Lei was a communist faithful who unflinchingly gave his life to the party till he was squashed by a pole. Unfortunately this is true. His zeal to help the motherland ended up to be his demise. After spying a truck bearing down on a dangerous land mass, trees and certain destruction, the intrepid soldier ran to the vehicle shouting a warning. Unfortunately for him, the thundering behemoth failed to hear his cries and struck a pole which crowned him on the skull, ending his life. To this day, comrade Lei is a legend of communist zeal, if not common sense.

In order to honor the good comrade and the people aiding Xiaomi’s growth, Lei Jun has thus decked out the corporate mascot in full communist gear (see sketch to the right). Its cap is adorned with the red star of communism and its neck bears the red scarf of the junior pioneers, aka communist cadres in the making.

Both the star and scarf are as much a part of communism as the hammer and cycle. Xiaomi gear proudly sports them both.

I was given the chance to talk with Xiaomi staff and asked what prompted them to use such a powerful communist image as their mascot. They demurred, claiming that they could have chosen anything and I was over-thinking their choice.

Considering that men buy more than 70% of Xiaomi phones, one has to wonder if the nationalist image was really chosen by happenstance. Men in China tend more to nationalism and this is especially true in the one-child policy generation, who purchase over 75% of Xiaomi gear. Why else would Xiaomi sell products like this?

With a founding member of Xiaomi being a communist loyal, and a mascot as “red” as you please, it should come as no surprise that Xiaomi has been caught (5) playing overly nice with Beijing. Eschewing privacy for access to data, Xiaomi gear has repeatedly been found with security exploits.

Their cell phones were deemed so dangerous that, within months of their global roll out, no less than six countries either took exception to them or tried to ban Xiaomi gear.

In Hong Kong, it was proven that Redmi phones had backdoors built in. These covertly copied Beijing servers on all user private info. Of course Xiaomi denied this was the case, until it was proven beyond a doubt. Xiaomi’s reply was the Chinese version of “oops” (6), and promised to patch the flaw. This proved untrue as months later, WantChinaTimes.com reported that the theft was ongoing.

In another instance, Singaporeans began to get telemarketing calls from mainland salespeople as soon as they unboxed and used their Xiaomi phones. Lei Jun’s firm was accused of either selling client lists or installing spyware then passing along user data to marketing firms.

The Indian Air force so feared Xiaomi security (7) that they were going to prohibit pilots from using Lei Jun’s products. The same was true for Taiwan as it considered a blanket ban as well (8).

In one of their most aggressive attempts at covering up security problems, Xiaomi went so far as attacking and discrediting a Taiwanese hacker. This man was set to present a paper proving that Xiaomi phones had serious security issues. To prove his point, he was going to show that that millions upon millions of Xiaomi user data had been breached and exposed. Xiaomi hid behind a court order which effectively muzzle the man even though overwhelming proof existed that he was in fact correct.

Most amazingly, all of these instances of data breach and theft occurred within six months of Xiaomi’s 6 country “global roll out.” Since then, a security firm tested a “Xiaomi handset.” The firm proved that it was a security nightmare. The testing body did everything humanly possible to verify that the phone was in fact an original. They did this because Xiaomi typically claims that any product failures are not true Xiaomi gear but fakes.

This security firm did all they could in order to purchase and verify that the unit was a genuine Xiaomi phone. Even the anti-forgery sticker proved it to be real.

Upon testing the handheld, the researcher found it to be a security nightmare. Upon hearing this, Xiaomi was outraged, calling into question the product, which it quickly established as “fake”. This is odd, as the product had passed Xiaomi’s fail safe measures meant to stop such a thing.

What’s worse, it took over one dozen Xiaomi “experts” to examine the phone and determine it was not a real Xiaomi. In total, this raises a serious question, if it were indeed a fake, then why had it passed Xiaomi anti-forgery tests? Even more, why was it so difficult for Xiaomi technicians to ascertain its fraudulent nature?

The truth is that no one can really be sure if the phone was genuine or a copy. But due to the level of energy required to answer that question, it seems obvious that Xiaomi’s problems run deep. 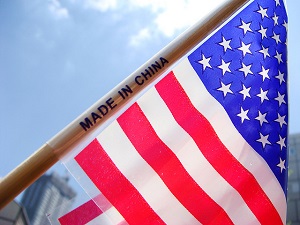 Impact on the US

Xiaomi’s presence and valuation are an unsettling reminder of how the sheer weight of the Chinese economy impacts us all. Hiding behind protectionist policies, Chinese companies flaunt international law, making bucketloads of cash in the process. They then go IPO in America, and armed with sudden riches proceed to purchase our firms.

In the end, we are left with commercial value destruction. Rather than use resources to enhance our lives, many firms choose the opposite. They dumb down products and sell only on price, driving innovative firms out in the process. We sit idly by watching and wondering why it is so damned hard to get a job any more.

All the while our rights are usurped, we amble blindly to the slaughter house, hardly a peep being heard. Talking heads sell the notion that ours is a service-oriented nation, manufacturing passe. Of course this is true, if our desire is to inhabit a land with a few hundred million barbers and McDonald’s fry boys.

America does have great homegrown options. Of course they are not peddled with the fervor of companies coming from China, because that is where the cash is, at least for the money men. By convincing us we need China, we stumble head long into a land of mediocrity.

Remember this when it comes time to buy Xiaomi stock or their goods. Take a look at their product and decide if they have done enough original work to merit your hard-earned cash.