NASA is Listening for Howling Zombies in Space 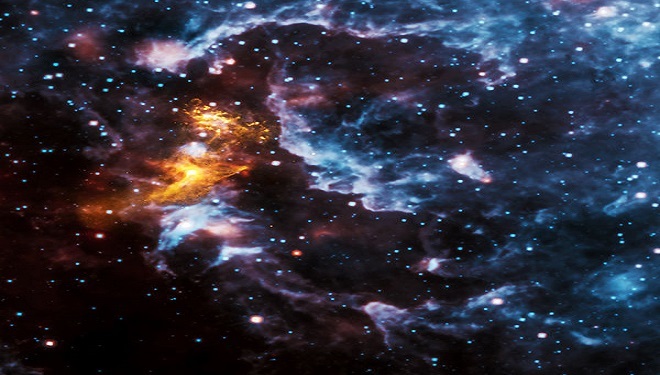 Mark Whittington view more articles
Facebook 0 Twitter 0 Pinterest 0 Google 0 LinkedIn 0
NASA (1) announced recently that one of its space telescopes, the Nuclear Spectroscopic Telescope Array (NuStar) (2) has picked up a burst of high energy X-rays coming from the heart of our galaxy, the Milky Way.

The best available theory is that the X-ray burst is the “howl” of dead stars as they consume their stellar companions. Someone at NASA with a poetic bent has called these “zombie stars.” However, a number of other theories exist to explain the source of the noise because X-rays can be emitted by a variety of sources.

However, most of the usual sources of X-rays, including stars of various ages, small black holes, and other objects that swarm around a super massive black hole at the center of the galaxy, emit at a low but steady intensity.

The observed burst, coming from within a 40 light-year radius around the super massive black hole, is standing out and is intriguing scientists.

The working theory about the source of the X-ray bursts derives from the fact that many stars, unlike our sun, exist in pairs, usually a smaller one orbiting a larger one. When one of the stars dies and starts to collapse on itself, it starts siphoning off material from its companion star. While the process differs according to the nature of the two stars, it can lead to the X-ray burst that NuStar is now observing.

Another theory states that NuStar is observing a pulsar (3). A pulsar happens when a star explodes as a supernova and the core collapses into a neutron star.

The remnant becomes highly magnetized and starts to spin rapidly, emitting beams of electromagnetic radiation. The very first observed pulsar was discovered in 1967.

The source of the X-ray burst could also be a white dwarf (4), the corpse of a star that has collapsed in on itself without first having exploded as a supernova. These objects are massive and emit X-rays.

A black hole could also be the source of the X-rays, emitting them as it swallows surrounding material.

Finally, the X-rays could be caused by a diffuse cloud of charged particles, called cosmic rays, interacting with surrounding material near the super massive black hole at the center of the galaxy.

The one common aspect of all of these theories is that none of them quite matches what is known by previous research. Scientists are frankly puzzled by what they are seeing. So they are busily devising models to explain the X-rays.

NuStar was launched in June 2012 from a launch station on the Kwajalein Atoll in the Marshall Islands on an Orbital Sciences Pegasus launch vehicle. Its initial mission was designed to last for two years but has currently operated for almost three years in a near elliptical 340-mile orbit around the Earth.

NuStar’s mission has been extended to 2016. Unlike the Hubble Space Telescope, which observes light primarily in the visual range, NuStar looks at the universe in the X-ray spectrum.

–> Take a census of collapsed stars and black holes of different sizes by surveying regions surrounding the center of own Milky Way Galaxy and performing deep observations of the extragalactic sky;

–> “Map recently-synthesized material in young supernova remnants to understand how stars explode and how elements are created; and
“Understand what powers relativistic jets of particles from the most extreme active galaxies hosting supermassive black holes.”

NuStar is also looking at phenomena ranging from studying the origin of cosmic rays to observing the extreme physics that exists around collapsed stars to microflares emitted by our sun. The telescope is also tasked with observing targets of opportunity, including gamma ray bursts and supernovae.