Editor’s Update: A recent Wall Street Journal article states that official charges by the Department of Justice against Ms. Chen have been dropped.

Xiafen Chen was a accused of stealing sensitive US data and then lying about it. The opaque nature of her relationship with a communist official in China and potential subterfuge were all prosecutors needed to charge her with espionage. The fear was that Xiafen Chen had sold out American interests and security to the People’s Republic of China (PRC).

An expert hydrologist, she had access to some of America’s most sensitive information about natural water flow. For example, she calculated how rainfall could impact rivers and the stress it would put on levies and the like. This information aided the U.S. government by staving off natural disasters.

But, it could also be used for nefarious purposes as well. For example, Xiafen knew which dams were most vulnerable to flooding and thus attack. This was a treasure trove of data for any country seeking to do America harm.

Ms. Chen, who is from China but now an American citizen, claims that accusations of espionage were unfounded. The facts, however, undercut her claims of innocence. Why she falsified information about meeting with communist officials, for example, was a definite red flag.

Xiafen countered that her sit-down with a powerful party member desperate to “take a peek” at the information she and few others knew, was benign. According to her, she’d only met the man at the behest of a family member (1).

Such a rejoinder does little to weaken fears of espionage, especially in a country such as China. Favors are proffered in a you scratch my back and I’ll scratch yours manner.

According to her, she only met with the man in hopes of helping her kin get a job under him. This begs the obvious question, what favor did she give in return?

Ms. Chen claims to love her adopted homeland and believes she did nothing wrong. She and her lawyer maintain that the espionage charges were born of a witch hunt. They were race-based and smacked of cold war mentality. Counter claims like this make for great soundbites and fit the politically correct agenda to a T, but are often smoke screens.

The fact that she downloaded sensitive data with an unauthorized password is anything but benign. The same is true of her opaque relationship with a high ranking communist party leader, and initial failure to disclose it.

Further along in the article, I will delve deeper into the Chen case because it defines a worrying trend of Chinese nationals pilfering American secrets and selling them to the Motherland – China.

If they can accomplish these goals, China can create an indigenous defense sector, something they’ve sought since Mao was alive.

Due to an increase in dealings with China, America increasingly finds itself in a perilous position. How can we ensure that meetings with Chinese do not end up with our data being stolen or our firms victims of espionage? Even more importantly, how do we know it will not be used against us should war break out?

This task is not as simple as it may seem. Most of us are unaware that Beijing uses its citizens as pseudo-spies to collect intelligence for diplomatic goals. According to a report by Strategy Page (2), Chinese state security is apprised of all citizens who are going overseas and for what purpose. These people are then made to comply with requests from Chinese intelligence officers. Upon returning they are debriefed about what they saw.

The China problem problem is not isolated to Ms. Chen but much broader in scope. Beijing has been stealing our secrets and things have only gotten worse over time. Engagement with China has been decidedly one-sided, and increasingly risky (3). 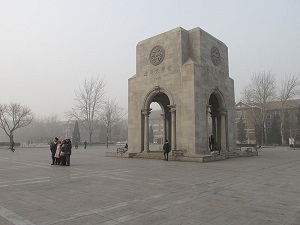 Chinese students pose a special risk and now outnumber those from any other other country (4). They tend to focus on science technology engineering and mathematics (STEM) as these fields provide them with the best chance at potentially emigrating.

Unfortunately for America, our success has led to Beijing’s monomania in leveling the scales. China’s attack team used for pilfering our know-how is a hydra – it has many heads. As one commenter asks, “Does China’s 275,000 students constitute an unplanned technology transfer program?” (2) He continues that Chinese faculty prefer mainland students in their programs.

This, too, may seem like racism by focusing on Chinese who attend and teach at American universities as people of concern. But the simple fact is that the Chinese, more than any other pantry, are attacking our economic advancement.

Take a look at the most recent case of two American-educated Chinese who taught at the University of Southern California and then allegedly stole trade secrets from two US tech firms. That’s right, Hao Zhang and Wei Pang were two of six Chinese nationals charged with the theft.

It would be hard to find a better example of the new normal in US/China relations. In this case, these Chinese men who were trained in the USA allegedly stole American tech and started a company selling that same gear. Their firm is backed by the communist party and a Chinese University.

Both Zhang and Pang benefitted from some of the best electrical engineering training the globe has to offer. After that, they remained in and worked for American firms. Apparently this was not enough for the pair who teamed up with four others to commercialize stolen inventions.

The indictment says that Pang and Zhang were part of a team which developed thin-film technology (FBAR) primarily used in mobile devices (5).

The duo then parlayed that knowledge into jobs for Avago Technologies and Skyworks Solutions Inc. While working for these US firms, the two allegedly began their plot to rob the Americans blind.

Prosecutors contend that almost ten years ago these two teamed up with four other Chinese and wrote a business plan revolving around selling the pilfered ideas. They only needed financial backing.

Zhang and Pang began pitching their business to anyone in China who would listen. It didn’t take long to find suitors, however, because the tech was cutting edge and fit one of China’s biggest goals – building a stronger military than America.

Oh yeah, did I mention that the innovative solutions that both Pang and Zhang worked on had military applications as well?

Yes, it’s true. While at an American university, these two Chinese nationals were allowed to work on projects which not only had military applications, but were funded by the U.S. Defense Advanced Research Projects Agency (DARPA) as well.

In others words, not only did they steal products meant to keep America safe from countries like China, but your tax dollars paid for it. And now the company they created is using that tech to strengthen the Red army and at the same time compete against the American firms they had worked for. Not a bad haul for team China, eh?

On the positive side of the ledger, the U.S. Government did apprehend Hao Zhang when he flew back to the U.S. But that’s about it for the good news. The other five defendants remain in China.

It could be argued that catching them might be tough. After all, China is huge and they could be in hiding. But of course they are not. In fact, we know quite a bit about all of the men who allegedly pilfered American ingenuity and who supplied them startup cash.

For example, we know that Tianjin University, backed by communist funds, helped Zhang and Pang start their company. Back in 2008 as we cheered the Olympics in Beijing, Tianjin officials flew to the U.S. and helped their Chinese protégées strategize about opening up a FARB plant in the motherland.

One year later, both Zhang and Pang quit their jobs and began teaching at Tianjin University. Subsequent to this, they and the co-defendants established a joint venture with Tianjin University and called it ROFS Microsystem.

According to prosecutors, starting this company should not be hard. After all, the two Chinese men had stolen a treasure trove of recipes, source code, design layouts, specifications and even presentations from American entities. As I said, the fledgling firm will mass produce FBARs-allegedly.

Once again, one could argue that Tianjin University is in China and untouchable. What action can America take against a Chinese university?