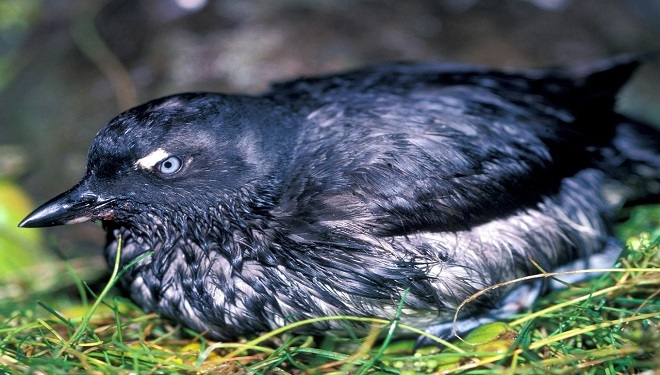 SallyPainter view more articles
Facebook 0 Twitter 0 Pinterest 0 Google 0 LinkedIn 0
It’s being called “unprecedented” and “grisly” by National Geographic. Massive waves of dead seabirds are littering the coastline of the Western US and British Columbia (BC). In January 2015, National Geographic reported that thousands of blue-footed diving seabirds (Cassin’s auklets) were washing up on the beaches from San Francisco, Washington State and all the way to central BC (1).

Many of the dead birds are juveniles and are described as being “scraggly”. The die-off is said to be the largest ever recorded. So what is happening to these birds?

Cassin’s auklets (auks) are chunky small seabirds and are found in the North Pacific. They like to nest in small burrows by digging holes in the soil or find a safe place in natural crevices. When in flight they look to many people “like a flying tennis ball” (2).

National Geographic reports that in October 2014, the young birds began to wash up on the shores of California’s Farallon Islands to Haida Gwaii (Queen Charlotte Islands) off central British Columbia.

The birds found dead along the shoreline are emaciated and this has led scientists to believe that the birds have starved to death. According to the Audubon, the food source these birds depend on is found at “the bottom of the food chain” – zooplankton, tiny marine creatures like krill.

Bill Sydeman, a senior scientist with the Farallon Institute (nonprofit marine ecology) has studied Cassin’s auklets for 30 years. He told the Audubon, “If ocean conditions change, auklets might be an early warning sign.” (3)

But what is the warning? Is it radiation from the Fukushima nuclear plant that’s killing off the birds’ food source? (4)

Researchers are concerned that the die-off could spread to other birds. Fish may also become victims if the problem is a lack of food sources.

In March 2015, Crosscut reported that the sea lion pups along the California coastline are dying. The pups were found to be emaciated. It’s believed that the “energy-rich copepods” have diminished, which are vital to the marine food chain (5).

NOAA (National Oceanic and Atmospheric Administration) reported in June 2015 that from January 2015 to May 2015, “California sea lion strandings were over 10 times the average stranding level for the same 5 month period, during 2004 – 2012.” 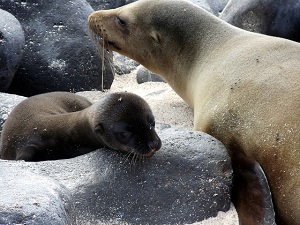 Birds Appear to Have Starved to Death

Are the deaths of seabirds and those of sea lion pups related? Is there something going on in the marine food chain?

National Geographic spoke with University of Washington seabird ecologist Julia Parrish who oversees the Coastal Observation and Seabird Survey Team (COASST). COASST is a 20-year program that tracks shoreline birds. When asked how many auklets had died Parrish responded, “We may be talking about 50,000 to 100,000 deaths. So far,” Parrish said.

To put the enormity of this die-off into context, out of the five largest bird die-offs recorded, the largest one recorded 11,000 birds dead.

National Geographic reported that the US Geological Survey as well as other agencies had conducted autopsies on the birds. So far, there’s been no cause of death. There hasn’t been any evidence of disease, trauma or oil coating the feathers (from an oil spill). The cause of death for now is being ruled as “starvation”.

If the birds starved to death, then what happened to their food source? Were the zooplankton killed off by disease, predators or as some have speculated, radiation from the Fukushima nuclear power plant?

Deep Sea News states that in Japan the bottom fish would be “prone to contamination because the fallout collects on the seafloor where they live.” As for the West Coast fish, it seems unlikely that they would suffer such a fate, based on the amount of radiation detected so far along the US west coast (6).

However, wide-ranging fish, such as tuna could be affected by Fukushima radioactive water. If the tuna were exposed while swimming in Japanese waters, they could arrive along the US West Coast contaminated. 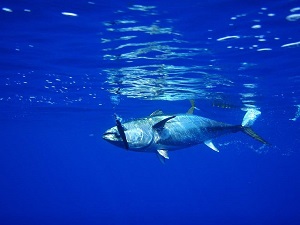 In August 2013, Washington’s Blog reported that “More than a year ago, 15 out of 15 Bluefin tuna tested in California waters were contaminated with radioactive cesium from Fukushima.”

Bluefin tuna are known as “wide-ranging fish”. This means that blue fins “can swim back and forth between Japan and North America in a year.” Sockeye salmon also travel this wide range (7).

Oceanus Magazine states that the level of radiation in marine life isn’t a simple explanation – It’s complicated. The length of exposure to radiation, size of marine life, the radioisotopes involved, oxygen in water, salinity of water, the temperature of the water and other factors all play a part (8).

According to Oceanus, fish are able to excrete cesium and get rid of it daily. Unless the fish is continuously exposed to cesium, the tissue expels it fairly quickly by excreting it.

Back in Japan, The Smithsonian reported in an article titled, “Birds Are in a Tailspin Four Years After Fukushima”, that the bird population around the Fukushima-Daiichi plant is still on the decline. While the radioactivity “has dropped throughout the region” the bird population continues to show a “sharp decline” that escalates every year (10).

While this is ground zero, there are still many unknowns about the amount of radiation that leaked into the ocean and how it’s affected marine life long-range and long-term. Reassurances from scientists monitoring the radiation levels in the ocean haven’t satisfied many west coasters.

When such a massive die-off is seen, it’s only natural that people question if this isn’t the effects of Fukushima radiation. 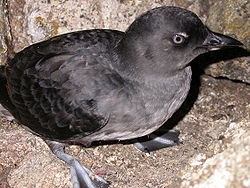 Fukushima or the Blob?

There is a worldwide mass-mortality being seen in marine life. During the past 18 months, the west coast from Alaska to California witnessed the washing up of tens of millions of sea stars. The deaths were not linked to a virus and scientists suspect that the killer could be “uncharacteristically warm waters”.

Some scientists believe the “massive blob of warm water that heated the North Pacific in 2014” was responsible for the California drought. 2014 was recorded as being hottest year for California. The blob was not only hotter, but also stayed warm longer than any recorded.

The massive warm water spanned the Gulf of Alaska and eventually began to travel the coastline to California. The blob altered the environment that marine life depends on. It was especially unfavorable to the zooplankton. Cassin’s auklet aren’t the only birds that rely on these small fish for a food source. Other birds and fish feed on them, too.

According to National Geographic, scientists researching the Oregon coastal waters discovered “some of the tiny crustaceans at the bottom of the marine food chain were replaced by smaller species that provide less nutrition for larger animals.”

Scientists are asking why the auklets are the only species being affected if the reason is due to a food chain change.

According to National Geographic, Bill Sydeman, a senior scientist at California’s Farallon Institute predicts that this die-off “might spread to the salmon and forage fish that eat those same plankton species and then perhaps to the murres or other birds that, in turn, eat those fish.”

Whatever the cause of the Cassin’s auklets mass die-offs, it seems to be part of a larger marine life crisis being seen around the world. Scientists are still searching for answers in this latest die-off.