MERS Virus Strikes South Korea, But Is It Contained? 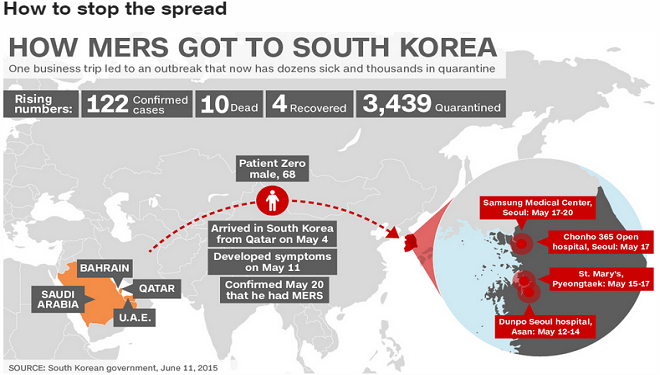 Jeri Simpson view more articles
Facebook 0 Twitter 0 Pinterest 0 Google 0 LinkedIn 0
MERS certainly isn’t anything new, but the latest outbreak is causing concern on a global level. MERS-CoV, known as Middle East Respiratory Syndrome coronavirus, has run rampant in the Middle East since 2012 and was first confirmed in Saudi Arabia. Originally thought to be similar to Severe Acute Respiratory Syndrome (SARS), scientists were able to discover the coronavirus originally came from bats and was likely transmitted to humans through camels (1).

Since it’s inception, the pathogen has infected over 20 countries, with South Korea seeing the largest outbreak. Eight days after returning from a trip to Bahrain on May 4, 2015, a 64-year-old businessman developed a fever and cough. In his efforts to treat his condition, the man went to four area health facilities in South Korea. After multiple misdiagnoses he was confirmed as infected with MERS on May 20, 2015.

The second reported patient was in the same hospital room as Patient Zero in Pyeongtaek, just outside of Seoul. Though the virus does not seem to pass easily from person-to-person, close contact with an individual can lead to infection. In South Korea, all infections seem to stem from medical contact within hospitals, likely caused by lack of knowledge about his Middle Eastern trip and inadequate sanitary conditions that lead to spreading.

Due to their unfamiliarity with the condition, MERS was able to rapidly infect a large number of patients and medical support staff at three of the four hospitals Patient Zero attended. Of those infected, over half have been connected to the hospital in Pyeongtaek, which has since been closed and quarantined (2).

In an effort to protect citizens, South Korean government officials announced outbreaks of the deadly virus at 24 health centers and vow to share any other locations, should they arise (3).

Hospitals aren’t the only area being impacted. Since June 2, 2015, 2,208 schools have shut down. Taiwan’s two largest airlines, China Airlines and EVA Airways, are reducing the number of flights to South Korea due to decreased demand. South Korea’s central bank reduced interest rates to a record low of 1.50 percent to support the economy as tourism and exports continue to suffer (4).

For the sake of the economy, officials are urging individuals not to panic. Based on data collected, the condition tends to infect more elderly patients, likely due to their weakened immune systems.

Many infected patients were found to have underlying conditions such as pneumonia or kidney disease, which would further weaken their ability to fight the virus. Currently in South Korea, MERS has been isolated to patients and staff in hospitals and family members who have come in contact with them.

The World Health Organization (WHO) and the Republic of Korea are working together to address concerns and gain information on the epidemic. The WHO team, lead by Dr. Keiji Fukuda, Assistant Director-General for Health Security, will study the virology, epidemiology, and clinical management of MERS in South Korea. “Because the outbreak has been large and is complex, more cases should be anticipated,” said Fukada (5).

Though the condition has been visible in South Korea for three weeks, new cases are still being reported. From June 8, 2015 to June 14, 2015, 58 new patients have been infected and that number isn’t showing any signs of slowing, though officials are hopeful. The incubation period for the virus is 2 to 14 days and officials are hopeful that those initially infected will no longer be affected (6).

Once identified as infected, patients were advised to quarantine. However, not all patients heeded this advice, some even traveling out of the country. Individuals have reportedly traveled to Hong Kong and the Philippines contrary to doctor advisory and self quarantine orders from the government.

As of June 14, 2015, a total of 145 people have been infected and 15 patients have died from the condition (7). The widespread pathogen is causing panic in South Korea, causing fear in the ability to contract MERS. At this time, WHO has not issued any travel advisories, though health centers in all countries around the world are recommended to pay attention for any concerning symptoms.

Some countries aren’t taking any chances. Chinese officials in Hong Kong and Macau have issued an alert, advising individuals to avoid unnecessary travel to South Korea (8).

No vaccine or treatment for MERS is currently available and South Koreans are experiencing a 35 percent mortality rate from the condition (7).