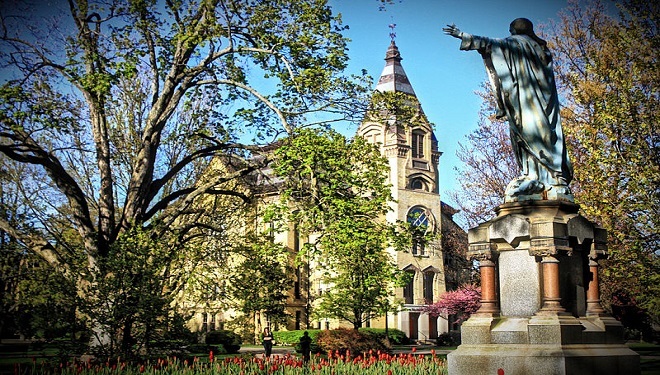 WC view more articles
Facebook 0 Twitter 0 Pinterest 0 Google 0 LinkedIn 0
Oh irony of ironies. In four years, the University of Notre Dame has gone from banning made-in-China apparel to opening a satellite university in that country. What was so bad about the People’s Republic of China (PRC) that Notre Dame refused to stock their gear? And more importantly, what caused such a change of heart? Has China cleaned up its act? Or is something more pernicious at play?

A few years ago, ND was the only major American university which would not allow made-in-China clothing to carry its brand. They refused to allow license holders such as Adidas to use the Notre Dame logo on anything made in the PRC (2). The reason for this was that they did not want to support a nation which promoted human rights abuses.

All of that has changed and now ND is mulling over its China strategy. Once leery of legitimizing the country and its actions, Notre Dame is going all in. The Fighting Irish will now support made-in-China education.

For one decade, the University of Notre Dame fought a solitary battle against China. Due to unfair treatment of workers, the school banned Chinese firms from making its gear.

In light of demonstrations against unfair labor practices, universities took to establishing codes of conduct for companies and countries producing their apparel. This should have led to change in the multi-billion dollar college branded clothing industry.

Unfortunately, most universities failed to address the real problem. Instead of forcing change, they merely paid lip service to such standards as production was moved but working conditions deteriorated.

What set Notre Dame apart was that, in contrast to other schools, they not only took exception to sweat shops in Latin America, but China as well. This decision was touted as an important one by many such as Frank Wolf, a Virginia Representative.

Mr. Wolf predicated his assertion on the fact that China is a “bad place to do outsourcing” and whole-heartedly supported Notre Dame’s decision (3). At that time, he emphatically supported their position and said he would push Virginia universities to follow suit.

I wonder what he would say now.

“The goal for Notre Dame in China and beyond is to widen its global reach by forming institutional partnerships, and by attracting a more international mix of students to its US campus in South Bend” (4). 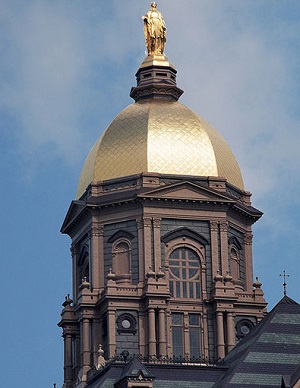 Under its sheer mass, China is reducing global human rights to Lilliputian levels. Beijing has begun the new “consensus” whereby they call the shots, take it or leave it. This would not be such a bad proposition if Beijing embraced anything smacking of civil society, but they do not.

Freedom of speech, freedom of the press, take your pick, Beijing has decided that its people have one of two choices, follow the party line or shut up. Any other option is simply not accepted. Of course that is to be expected, China is communist right? We all know that authoritarian governments are not the most pliable, especially when it comes to bothersome issues such as human dignity and the like.

Unfortunately, companies are agnostic. Making a deal with the devil is par for the course. They justify their actions by hiding behind the mantra of doing what is right for their shareholders. “We are in business to make money,” they proclaim. It would now seem that businesses are not the only ones heeding that call. In what can only be called a perversion of mammoth proportions, the University of Notre Dame is now siding with China as well.

“As a Catholic university, one of its distinctive goals is to provide a forum where, through free inquiry and open discussion, the various lines of Catholic thought may intersect with all the forms of knowledge…” (3)

You have to wonder just how much freedom of expression Notre Dame will have. After all, under the new Chinese leader, scores of Christian churches have been torn down. Ironically enough, many of them will be a stone’s throw away from the proposed campus of this vicar of higher education. But more on that later.

Yes, to put it mildly, under their new leader, China has ratcheted up “the hate.” For example, Beijing’s present for the upcoming International Woman’s day was to jail a few ladies shepherding that cause. It wasn’t only women that the communists came after, but the elderly as well. A septuagenarian was jailed for penning a few letters slightly critical of communism.

In Chinese universities, neither students nor profs can openly discuss democracy and other pernicious western ideals. Many of these will install video cameras in lecture halls and tape what is being said. Their goal is to squelch autonomy and open discourse at all costs. After all, it would be nothing less than anarchy to allow professors and students carte blanche to speak their minds freely. 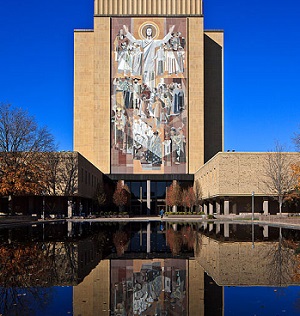 The Role of Notre Dame in China

One might question what a Catholic university could be doing in a country run by people who call religion a “disease” (5). Notre Dame apparently sees no problem with this and contends that while in China they will not “hide their Catholic identity.” Of course, they temper this statement by saying that they have to be flexible as well. From the looks of it, “flexibility” must be a metaphor for selling out. After all, in order to open a Chinese campus, ND must work with the top communist leaders in Beijing. Those same leaders are the one’s dead set on destroying religion as we know it (6).

Beijing is creating a new and improved versions of all major faiths. Everything from Buddhism to Christianity should now have communism at its core. How communist officials who are sworn atheists (5) will handle this Herculean task is anybody’s guess, but there you have it.

Beijing has decided that the Dali Lama is no longer in charge of his own afterlife (7). According to them, he cannot be reincarnated as he wants, but must do it to their liking. They go so far as to say that anything less is a travesty to the sanctity of the Buddhist belief.

Any religion seeking to proselytize can stay away from the center kingdom-China as well. Their wanton ways are unfit for the citizenry. Believers in Allah, too, must conform to Islam 2.0. Beards and burkas are now prohibited, and believers forced to break religious fasts.

The communists are re-imaging the world to their liking. And yes, they have decided that Christianity has it all wrong and needs a little help as well. In order to overcome this, Beijing is working on a new religious model. Apparently Jesus did not understand the needs of the Chinese people, or so Beijing says. In order to help their cause, the communist party has condoned the destruction of dozens of churches across China. Ironically enough, some of the most severe religious devastation is in the region of the proposed ND campus.

Aside from setting up shop in an area where hundreds of crosses have been torn down, ND is swimming upstream. Recall that their mission is to create an open forum for discussion which integrates Catholic beliefs. How they will go about this is anybody’s guess. Such a thing may be hard to accomplish in China, where the communist party does not even recognize the authority and voice of the Pope.

At the risk of sounding cynical, I find ND’s actions shameful. Claiming that by coming to China they will not have to compromise their integrity is questionable at best. How does Notre Dame propose to do this in a country run by one of the top six most oppressive regimes in the world? Do they really believe that in China their words will hold sway?

Perhaps I have it wrong, but I seriously doubt it. Being the humble sort, however, I welcome the chance to be shown the errors of my ways. As such, I am reaching out to anyone from the University of Notre Dame. What I propose is that in a show of good faith one of the university officials contact me, and we meet. Being a good Catholic, I welcome the chance.

My proposal is a simple one: the next time they come to China, we hold an impromptu prayer session in public, just as we could do in the USA. After this, I suggest that we walk the streets and explain the merits of our religion to anyone willing to listen. We can ask them to join us at church later in the day.

I think such a show would be an excellent way to achieve Notre Dame’s mission of open discussion about the faith. My preference would be to hold this meeting near communist party headquarters, but I am open to suggestions.

I urge that anyone affiliated with the university contact Ryan who can put you in touch with me. I look forward to meeting up and furthering the Catholic cause in China with you.